Banana Republic opens here today in what will be a litmus test for further expansion of the Gap Inc.-owned brand across Europe. 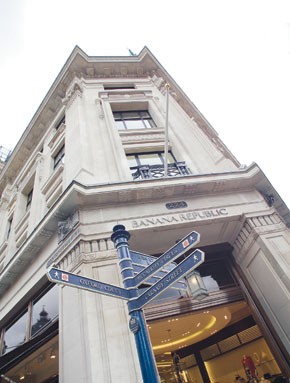 Bally Bets on the U.S. Market With New York Flagship and Growth Strategy

LONDON — Banana Republic opens here today in what will be a litmus test for further expansion of the Gap Inc.-owned brand across Europe. The new store launch will also mark the global debut of the limited edition women’s wear collection, Monogram.

“I’ve been working for Gap Inc. for several years, and the most frequently asked question is: ‘When will Banana Republic move here?'” said Anita Borzyszkowska, vice president of public relations at Gap Inc.

“It has the biggest brand recognition already in the U.K., particularly in London.”

Borzyszkowska stressed the launch was a tentative step for Banana Republic in the European market, and that any subsequent rollout plans would depend on the response to the London debut.

She said she was confident about the offering: “The clothes are a little more of an investment, but are still accessible. We offer a great service proposition, too. It’s ‘high street premium.'”

Industry figures are enthusiastic as well about the brand’s arrival. “Banana Republic has always been known here, particularly by people who travel,” said Deborah Fitzgerald, marketing director at Interbrand. “It’s an interesting time in the U.K., too, because people are turning away from cheap fast fashion to more premium middle-ground brands, and Banana Republic sits perfectly within that category.”

The new store occupies the corner of the former historic Dickens & Jones building on Regent Street, and spans 17,000 square feet over three floors.

Borzyszkowska declined to give sales projections, but real estate sources said the annual rent is about 1 million pounds, or $2 million at current exchange.

The store offers the complete Banana Republic range of men’s and women’s wear, with the latter making up roughly 60 per cent of the space. In addition, there are dedicated sections for petites, accessories and beauty.

Monogram men’s and women’s wear sections are also a key element. The limited edition line, which focuses on pared-down styles in luxurious fabrics such as cashmere and silk gabardine, began exclusively as a men’s line two seasons ago. For spring, it will be a 30-piece collection for both men and women.

“It’s for our customers who want that extra bit of luxury,” said Borzyszkowska.

Borzyszkowska said prices are moderately higher than in the U.S. to account for the higher costs of operating in the U.K.

The look of the store is warm and elegant with neutral colors on the walls, dark wood laminate counters and display islands and a dramatic spiral staircase in the corner.

Lining the staircase are photo prints curated by London’s Michael Hoppen Gallery. They feature black-and-white shots of Winston Churchill, the Empire State Building and Jackie Kennedy. Throughout, the space has been made intimate with Art Deco furniture, Richard Serra prints and various objets. “We’ve been working with lots of London talent to create the final look,” said Borzyszkowska. “But it’s still in keeping with the Banana Republic look.”

A key emphasis of the store will be on service, with a concierge service to book restaurants and deliver purchases to customers’ hotels, multilingual staff and in-store stylists.

Stephen Sunnucks, president of Gap Inc. Europe, said: “With its affinity for fashion and luxury products, London has the potential to be a strong market for Banana Republic. This is an exciting first step for Banana Republic in Europe.”