By Sharon Edelson and Jessica Iredale on October 21, 2008
View Slideshow 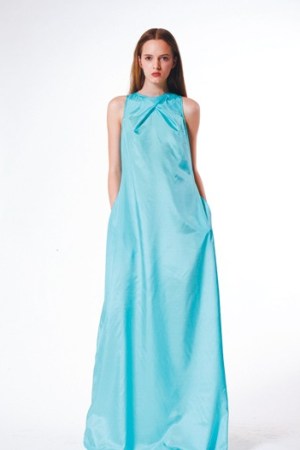 Banana Republic may be the least troubled of Gap Inc.’s three retail concepts, but that doesn’t mean it’s on cruise control.

This story first appeared in the October 21, 2008 issue of WWD. Subscribe Today.

Simon Kneen, the former executive vice president of Retail Brand Alliance, Brooks Brothers’ parent, was named design and creative director of Banana Republic in January, and he’s been busy modernizing silhouettes, upgrading fabrics and refining the customer experience in stores, including testing new services. Kneen has also left his imprint on advertising, with a new print campaign launching in January that features male and female musicians photographed by Tom Munro.

There’s clearly work to be done. For the second quarter ended Aug. 2, Banana’s same-store sales fell 6 percent even as overall revenues 0.5 percent to $599 million from $596 million in same 2007 period.

Spring-summer 2009 represents Kneen’s first full collection for Banana. Consumers will notice updated shapes and forward renditions of the firm’s greatest hits, such as a takeoff on the retailer’s iconic trenchcoat: a long sleeveless double-breasted trench dress in white parachute silk.

“The structure [of the clothes] was looking a bit dated,” Kneen said. “We’re trying to get things loosened up.”

“Pool blue is an optimistic color,” Kneen said, holding a long sleeveless dress in the color. Kneen said he was feeling “easy-breezy effortless.” In terms of sustainable fabrics, there is lots of soy silk. “I call it sexy sustainability,” said Kneen, whose other eco-efforts include organic cotton and bamboo cashmere.

Kneen said he was also influenced by architecture and origami for the cuts of sweaters and details such as the tucking around the waist of a short white zippered jacket and a short gray jacket with tucks on the collar. “We’re using new techniques and what we call fabric manipulations,” he said. There’s also new fabrics, such as paperweight leather and parachute silk.”

Kneen described his efforts as “evolutionary. We all felt as though some freshness was [necessary] and the need to walk away from the structure of last season.”

Banana Republic has adopted the phrase “city style” to define its look and the lifestyle — aspirational to some — of wearers. “I live in the city,” said Kneen. “I just came back from Tokyo, where we have 26 stores, and Europe. They have so many things in common, great exhibitions and architecture. Whether you’re living in the city or suburbs, you want to be connected to what’s happening.”

Banana is bypassing soccer moms and other less hip demographics to focus on “the young person involved in his or her career,” Kneen said. “The work attitude, that’s the whole point. People wear Chanel with Banana Republic and people wear Banana Republic with Old Navy. That’s what’s modern.”

Versatility is a big buzzword at Banana. “We have big wins when we have versatile products,” Kneen said, adding he understands the business issues facing the brand. “You need to design into business to be successful.”

Two items from the core collection — a khaki trench, $225, and white blazer, $150 — are among the most versatile and can be worn with everything from jeans to evening dresses. He also designed a commercial version of the pant of the season, the harem.

Banana this summer is launching Heritage for women, a collection of “supermodern” and “sexy weekend pieces” that reference signature Banana styles. Heritage will be sold at less than 40 Banana units and “separated out” from the main collection to make a stronger statement. Price points for Heritage are on par with the core collection, but certain styles may be more expensive.

BR Monogram, clothes that go from work to dinner and beyond, is priced 30 percent above the core group. Banana in April opened a 3,000-square-foot BR Monogram store at 205 Bleecker Street and Sixth Avenue in Manhattan. Kneen said there are no plans for additional Monogram units, but noted the 120-piece collection is sold at about 40 Banana stores. “It’s in larger locations where we have space and where we think customers would appreciate the aesthetic and price. It really is a true collection.”

The Monogram store on Bleecker Street has “helped us refine the product,” said Kneen. “The customer is very selective. The point of that store is to learn about service.” Monogram offers on-site tailors and stylists, services Kneen wants to expand to other units. “We will offer tailors and stylists on a wide basis,” he said. “We haven’t worked out the [details] yet.”

Banana Republic will unveil a new store model next spring, but Kneen was not ready to talk about it. He did say that store windows in mid-January will feature blow-ups of his sketches for the collection. “I sketch, which is quite unique for creative directors,” he said.

Asked whether long-time Banana Republic customers will be put off by the changes he’s made, Kneen said, “We continue to offer quintessential items, whether they’re on-trend or off-trend, such as the trench and the great white shirt. The collection has a great sense of energy.”