More than 50 years of weak regulation has led to severe environmental effects and has deteriorated workers’ health, according to an industry association.

By Dene-Hern Chen
with contributions from Rock Ronald Rozario
on April 17, 2014
View Slideshow 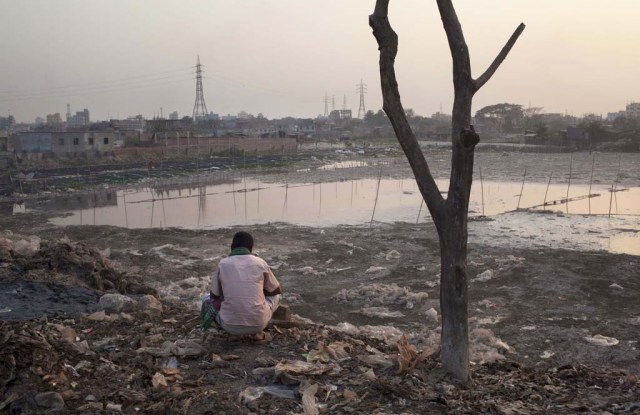 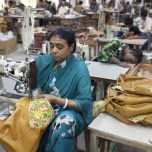 DHAKA, Bangladesh — The Buriganga River runs west along Hazaribagh, a subdistrict of Dhaka and home to a leather industry that produces finished skins for some of the world’s most expensive handbags. Its waters are inky and dense from the industry’s daily release of about 22,000 cubic liters of toxic waste, enveloping the area with the omnipresent odor of sewage.

For more than half a century, Hazaribagh’s tanneries have produced soft, finished leathers that are then exported to countries such as Italy, Portugal, Spain and China, where they are manufactured into luxury products. Leather handbags and purses for labels like Michael Kors, Burberry, Louis Vuitton and Hugo Boss all hold leather originally treated in Hazaribagh’s tanneries, said the Bangladesh Tanners Association.

Exports for the fiscal year ended in June were more than $900 million. This is expected to grow to $1.2 billion for the current year.

The boom has come at a cost. More than 50 years of weak industry regulation has led to severe environmental effects and has deteriorated the workers’ health, the BTA and workers said.

“It is not countable, our profits compared to the environmental loss, it is uncountable,” said BTA chairman Mohammad Shaheen Ahmed, referring to the irreversible damage caused by the chemical pollution. “[The industry] has been here 50 or 60 years and the river has been destroyed.”

Hazaribagh was recently named one of the world’s top 10 toxic threats in a survey by New York-based environmental organization Blacksmith Institute, placing it alongside Chernobyl and the Agbogbloshie dump site in Ghana, a hazardous dump for electronic waste off-loaded by Western countries.

The effluent from Hazaribagh’s more than 200 tanneries contain high levels of heavy metals such as chromium and cadmium, which studies have shown could cause cancer. In addition to chemicals, the sector releases about 69 tons of solid waste into the Buriganga, which is now ecologically dead. Other bovine remnants are laid out on Hazaribagh’s edge to dry in the sun; fish farmers use these as feed, and the stink magnifies the area’s noxious fumes.

According to Ahmed, the only way to solve the sector’s environmental issues is to press the reset button: to relocate all of Hazaribagh’s tanneries about 15 miles north to Savar on government-promised land that will come with an effluent treatment plant that’s in construction.

“The problem is that buyers want compliance [in terms of environment and health] and the orders have decreased. New buyers have refused to come here because of the environmental issues,” Ahmed said, blaming the relocation’s delay on government bureaucracy. “I think it would take time, about three or four years more.”

“The first ever talk between the owners and the government was held in 1991. Since then, a good number of talks have taken place, a good number of memorandum of understandings have been signed, but the tannery owners keep on delaying,” she said.

“The environmental law has no implication on the tanneries,” Hasan said, explaining that the owners should be fined or prosecuted for unlawfully disposing of toxic waste for more than 50 years. “[But] our government doesn’t want to be unpopular to the business community because if this business shuts down, that would have a chain effect on other industries.”

Hazaribagh is not only inflicting environmental damage. There is also the cost to workers laboring daily without full knowledge of health risks, she said.

“There is ignorance and [the owners and buyers] are taking advantage of the ignorance and they are exploiting them,” Hasan said. “The process [the workers] are involved in, the amount of labor they have to give, and the money they get with the health hazards they get in return, I would call it inhumane and unconscionable.”

It is common for workers to get tuberculosis, skin diseases, respiratory problems and perpetual stomach aches, said Abdul Maleque, general secretary for the Tannery Workers Union, who has worked in Hazaribagh’s tanneries since the late Sixties.

“There are more than 100 types of chemicals used in tanneries and these are so dangerous that the buildings here have tin roofs that corrode and collapse after only one year,” Maleque said. “Even cancer can develop in our workers, but we don’t know if it’s linked because there has been no clear research to show the effects of the chemicals [on us].”

With more than 20,000 workers in the sector, the union is mostly focused on advocating for higher wages that can range from $38 to $64 each month. It is also trying to push owners and workers to use protective gear when handling chemicals.

Yet in several different factories, workers — some as young as 10 — were using their bare hands to handle raw hides that had been treated with chromium, while some waded barefoot in bright blue liquid with acids that came up to their shins, using pails to empty the indoor drains that collected run-off from the treatment drums.

Zohid Islam, 35, works eight to 12 hours a day, putting and removing raw hides into a container with hundreds of chemicals before carrying them to a machine for processing. For this, he gets paid a fixed monthly wage of 6,500 taka, or about $83.

“We only use gloves when we are putting the hide into the ovens because it is so hot and our skin would burn if we don’t do so,” said Islam, adding that his hands are perpetually itchy but he is not sure about any dangerous side effects. “Maybe there’s some danger but I don’t know anything about it.”

Workers at a leather production factory who toil to nail, stitch and sew handbags and belts for a Japanese brand have an easier time. Since leather work requires skill, employees tend to be paid more than an average garment worker, earning about $140 a month, if they are experienced.

Shyam Sunder Sikder, chairman of the Bangladesh Small and Cottage Industries Corp. in the Ministry of Industries, which is overseeing the relocation of the tanneries to Savar, said the new deadline is set for next December and dismissed environmental concerns.

“After the owners leave, [Hazaribagh] will be cleared by the entrepreneurs themselves,” claimed Sikder, explaining that the tanneries are mostly privately owned. “After fully setting up [the tanneries in Savar], the government will go after [violating tanneries] with legal action.”

BTA chairman Ahmed is confident that once the industry “cleans up,” more international buyers would be willing to associate themselves directly with the Bangladeshi tanneries. He waved away concerns of workers’ abuse and safety that have been brought up by human rights activists, notably in a 2012 report by Human Rights Watch.

“If this sector becomes more developed in five years, if our relocation is smooth and if we set up environmentally friendly tanneries, then we can set up sewing factories and more leather goods and leather footwear factories and we can arrange for more employment,” said Ahmed, predicting that exports would rise to $2.5 billion before 2020. “When we make a good and environmentally friendly product, then the brands will come to us directly and they can give us a good price.”