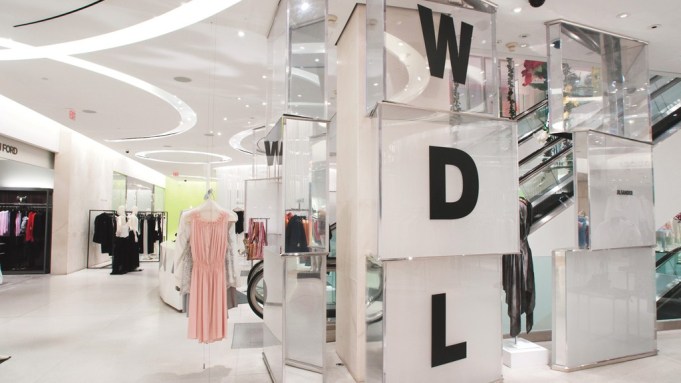 The way Barbara Atkin sees it, the role of a fashion director is a lot like that of a teacher. Both, she said, require bringing “huge thought processes” and “a vision” to the table.

That Holt Renfrew’s vice president of fashion direction would use such analogy is no coincidence. Prior to her career in fashion, Atkin was a teacher in Canada’s public school system — mainly in primary schools working with children of recent immigrants and helping them ease the transition and acclimatization to the new culture.

“Fashion,” Atkin said in a telephone interview from Toronto, where she is based, “was just always a love. It’s interesting how your career takes you on one road, but your passion takes you where you really need to be.”

That passion got a real jolt in the late Seventies, when Atkin met Canadian designer Wayne Clark at a party. She was instantly fascinated, so much so that she decided to invest in the business.

“Through that, I slowly left teaching and started running a showroom company,” she said. “I had many designers working for me over the years and sold them to many retailers. Holt Renfrew was one of them.”

When the Weston family bought Holt Renfrew in 1986, it was looking to further develop the retailer and tap into new customers, and executives at the retailer singled out Atkin as the perfect target shopper.

“Smart retailers get into the heart and soul of who their customer is,” she related. “They identified me as a customer that they wanted to attract, and before I knew it, they coerced me, very nicely, to come and work for them.”

Atkin recalled the early conversations precisely. “I said, ‘To do what?’ They wanted me to give them a point of view; first, to understand the customer  — me being that customer — and then, to tell them about the things that I loved. What did I like about shopping? What were the experiences? What made me want to stay in the store longer?

“I never grew up thinking that one day, I was going to be a fashion director,” she added, a certain nonchalance peppering her voice. “I don’t think I even knew that role existed.”

Twenty-five years later, and Atkin is considered the ultimate industry veteran: a well-known personality in the Canadian fashion scene and beyond, and a tour de force who works closely with designers from New York, Paris and Milan. Her point of view keeps Holt Renfrew at the forefront of fashion trends. It’s a mandate she took on practically from Day One.

“I was looking at that customer worldwide, understanding what that customer wanted, and what the best retail stores in the world were offering beyond product,” she said. “I never stopped thinking like a customer. The day great retailers stop focusing on the customer is the day they disappear. I looked at social change, and understanding the connection between social change and business opportunity, I took each trend and translated it into strategic merchandising themes.

“I think that came from my teaching background,” she added.

Atkin stressed that she doesn’t look at Holt Renfrew just within the context of Canada’s retailing scene. She always measures the luxury chain against the global competition — Neiman Marcus, Bergdorf Goodman, Selfridges or Lane Crawford.

“You need to have a point of view — how are we going to buy it differently from others? What do our customers like?” she asked. “We’re all fighting for the same collections worldwide, and we want to benchmark ourselves against the best in the world. Retail landscapes can become a bit homogenized with the same collections everywhere, so bringing in newness constantly has become so important to us.”

Personal appearances are one area Atkin considers key. Oscar de la Renta, Michael Kors, Stella McCartney, and Peter Pilotto are among the designers who have come to Canada for a visit. “They are the superstar, and the customer wants to touch and feel and say that they met that designer,” she noted. “When we launched Alexander Wang in our store, we couldn’t believe the lines that went all the way through the store and outside on to the street.”

That particular experience was an “eye-opener” in more ways than one.

“We saw how he was democratizing fashion and speaking to a whole new customer, which was another trigger that said, ‘The world of designer is changing,’” she observed.

These days, Atkin keeps a close watch on emerging talent via World Design Lab, an area at the retailer that is an incubator for emerging talent from around the world. It has been the jumping-off point for designers like Wang and Joseph Altuzarra, and often serves as an entry for local designers like Toronto label Greta Constantine.

While there is no specific department earmarked for Canadian designers — “I don’t like to merchandise by nationality,” Atkin said — Holt supports local talent in various ways. The retailer is a sponsor of Toronto Fashion Week, and its team also attends Montreal Fashion Week to stay on the pulse of Canada’s fashion scene.

Often, Atkin works directly with Canadian designers for several seasons before presenting them to the store’s  buying team.

“Before it gets to the buyer, I have to be really happy with that collection,” she explained. “This means I’m working with the designers by having them understand what merchandises well on the floor, by looking at fit and how they can round out their collections. We work on pricing and help them identify who their customer is, and where they see their collections merchandised in the store.”

As for future evolution, Atkin offers a number of ideas.

“I’m looking at the notion of gender, the blurring of gender, and how a young guy and girl shop,” she said. “We have traditionally merchandised our stores with men’s on one side and women’s on the other. To me, the contemporary world is about shopping as a social activity — so we are going to build a shared shopping area. Our new contemporary world will be a mix of guys and girls, together in one area.”

“We speak to our customers on a daily basis,” Atkin said, recalling several special customer surprises she and her team cooked up for top clients. “In Vancouver, for example, we have a customer who absolutely adores and collects jewelry. In May, we flew her with her personal shopper to meet with one of her favorite jewelry designers, in that designer’s home and studio, and she did the most beautiful one-of-a-kind piece. In Calgary, the boyfriend of one of our top customers wanted us to surprise his girlfriend with a present. We created an experience and set up a whole trip to Paris — she had never been — to hook up with me there. It was Alber Elbaz’s 10th anniversary at Lanvin. A limo picked her up and she joined me at the fashion show and after party.”

While these extravaganzas aren’t exactly a regular gift-with-purchase, Atkin said it’s that close rapport she and her team cultivate with customers that adds a certain something extra to Holt Renfrew.

“We know that at the end of the day, those customers can buy things anywhere in the world, whether it’s online or any store, yet they choose to spend their time and money with us,” she said. “When you have a customer who trusts you so much that they come to you for your suggestions, you know you’ve really won them over. And you’ve really won the title of the leading luxury retailer in Canada.”