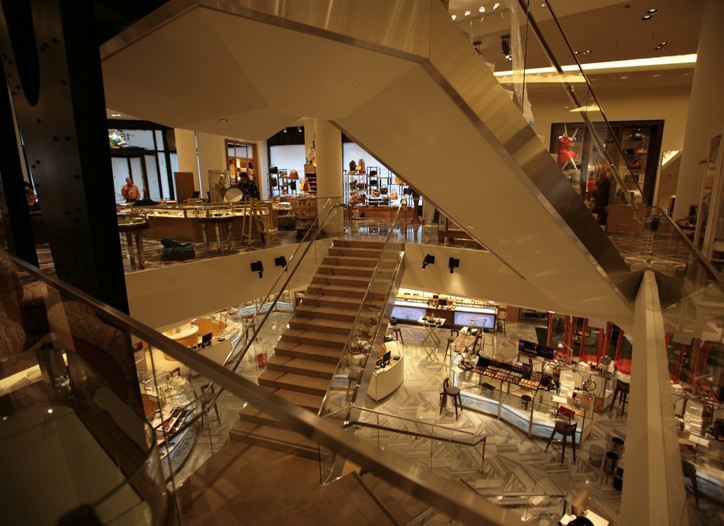 Despite the economy, “no one at Barneys has any reservations about Chicago,” said Simon Doonan, the retailer’s creative director, who noted strong sales figures developed quickly at the original Windy City store, which opened in 1992. “Some of the other stores have taken a while for it to stick. Right off the bat, sales were really strong in Chicago.”

On Tuesday, David Jackson, chief executive officer of Istithmar World Capital, the parent of Barneys, told WWD that Chicago was one of Barneys’ top-performing locations. “It was doing an disproportionate amount of business for that square footage. Now is a tough time for an expansion,” he admitted, “but we still believe in the Chicago market, long term.”

Barneys officials declined to give first-year sales projections for the new store.

In addition to the Chicago store, Barneys is opening a 9,300-square-foot Co-op in Philadelphia today and has moved forward with plans for a new 62,000-square-foot flagship in Scottsdale, Ariz., set to open this fall. Doonan plans to attend a trend luncheon there on April 22.

Such growth comes at a pivotal time for Barneys, given that its parent company earlier this week pumped more than $25 million into the chain, countering cash flow concerns among vendors and factors and Standard & Poor’s downgrading the retailer’s debt.

And while plans for the Chicago expansion date back years, with construction on the new store starting in November 2007, Barneys executives said economic conditions did lead it to scale back its opening festivities, serving Champagne and mini donuts in Chicago today rather than host a more lavish affair like its San Francisco launch, which included a cocktail party and tented dinner and dancing benefiting a local charity.

The bright, airy store presents the opposite aesthetic, however. Its marble floored lower level with back-lit decorative murals houses cosmetics and fragrance, including refrigerated offerings from fragrance maker Frédéric Malle along with his trademark orange-capsule “smelling capsules.” Whereas handbags and jewelry from Valextra and Henri Cuir fill the likes of the first floor, a 3,500-square-foot women’s shoe salon with styles from Christian Louboutin, Givenchy and Balenciaga dominates the second floor, along with women’s designer apparel including looks from Lanvin, Givenchy, Bottega Veneta and Stella McCartney.

Meanwhile, the women’s Co-op section with its maxidresses from Ella Moss and industrial-inspired design, complete with raw steel and whimsical painted furniture, occupies the third floor, which includes a 1,400-square-foot personal shopping area with two private suites and a lounge area with a flat-screen television.

“Chicago is the grooviest and hippest in our collection of flagship stores,” Doonan said. “There are ideas we’ve been playing with in Vegas and San Francisco that we’ve taken to another level.”

In particular, Barneys took more eco-friendly measures, including installing a planted green roof, using locally resourced construction materials and recycling a majority of the demolition material from the previous structure, said architect Jeffrey Hutchison. The space was previously occupied by several ground-level specialty stores and Barneys razed them and built up from there. Meanwhile, Hermès is expected to move next year from 110 East Oak Street into Barneys’ former space at 25 East Oak Street, where it will lease about 4,600 square feet on the first and second floors, according to press reports.

The merchandise mix at Barneys’ Chicago store is similar to New York, said Doonan, who said Chicago used to be known for its more conservative dressing — but no longer. Although the economy has caused Barneys to modify its budget, “our job doesn’t change,” Doonan said. “My job is to create desire. That doesn’t change in good times and bad.”

To create a local connection for the opening, Barneys teamed up with a group of city students who created some 30 portraits of President Obama, which are set to decorate store windows today.

A consistent message of Barneys has been “dare to be different,” Doonan said. “In these times, if anything we need to turn up our message.”