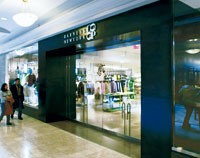 ATLANTA — Barneys Co-op is the new kid on the block in Atlanta.

The Atlanta unit is the first of three planned openings this spring. A Costa Mesa, Calif., Co-op store is to launch March 10, followed by one in Chicago March 24. Barneys has three freestanding Co-ops in New York.

The retailer, which Jones Apparel Group acquired for $397.3 million in November, is poised for a national expansion with four to five more Co-ops set to open in 2006. Barneys’ flagship also will begin a rollout next year, though the number of stores and specific cities haven’t been disclosed.

Barneys Co-op is the young contemporary counterpart to the flagships, offering hip lines such as Marc by Marc Jacobs, Theory, Diane von Furstenberg and a heavy concentration of denim and sexy tops. Some see Co-op as a vehicle to drive an ultimate expansion of the flagships. Howard Socol, Barneys chairman and chief executive officer, said one doesn’t necessarily follow the other.

In Atlanta, Barneys is banking on the strength of its name and reputation.

“We are Barneys,” Socol said. “Our stores are so different and distinctive, from our merchandise sensibility to the way we edit lines to our private collections. It’s in our DNA. We put what we believe in, and then customers will lead us.”

This story first appeared in the February 4, 2005 issue of WWD. Subscribe Today.

Buying will be centralized out of New York, but each store will be tweaked based on climate and lifestyle differences, Socol said.

Beginning with a charity benefit party for 500 people Thursday night at the Atlanta store, Barneys also will get the word out through direct-mail campaigns and promotions. The retailer will try to wow Atlanta customers with exclusive lines not seen here before, and with collections edited with Barneys’ fashion-forward sensibility, said Terence Bogan, vice president and divisional merchandise manager.

With denim at about one-third of product, jeans lines exclusive to Barneys include Stitches, Salt and Antique.  Barneys’ private collections, now at less than 10 percent of product, is growing, as the store zeroes in on key items each season, Bogan said. For spring, he expected peasant skirts with beading and embellishment to be hot trends.

Designed by the architectural firm Robert G. Lyon and Associates, the store includes flea market finds such as giant ceramic greyhounds. Barneys is in a former Abercrombie & Fitch space in Phipps Plaza, a mall with more than 100 specialty stores and anchored by Saks Fifth Avenue, Parisian and a Nordstrom that will open this March.

“Barneys in Atlanta is a good move, as in the past, most retailers haven’t given Atlanta the cosmopolitan credibility it deserves,” said Jan Martinez, president, Ashford Management, an Atlanta retail-executive search firm.