Barneys New York celebrated its Copley Place Boston opening, the luxury retailer's first flagship in 13 years, at a party last Thursday that was the talk of Beantown. 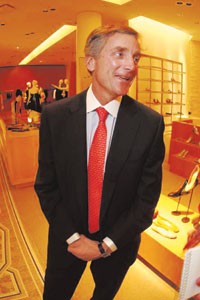 BOSTON — Barneys New York celebrated its Copley Place Boston opening, the luxury retailer’s first flagship in 13 years, at a party last Thursday that was the talk of Beantown.

About 500 guests waited with cocktails behind a scrim before the curtain dropped, trumpets blared and a children’s choir sang, “I’ve got Barneys, who could ask for anything more?” to the tune of “I’ve Got Rhythm.” Then guests were able to explore the 45,000-square-foot store.

“We’ll have everyone pour back out [to the tent] to eat,” said Barneys creative director Simon Doonan, who orchestrated the event, surveying the scene from the sweeping main staircase. “Food and merchandise are not necessarily compatible.”

Partygoers drank and shopped, each fueling the other. A quartet of girlfriends ensconced themselves, with a champagne bottle, in the clubby chairs of the shoe department amid the rubble of opened boxes and discarded try-ons. Above them, the soul group the O’Jays performed, snaking a conga line for “Love Train” around the second floor.

Peter Boneparth, president and chief executive officer of Barneys’ parent company, Jones Apparel Group Inc., who took his son to Fenway Park for the first time last summer, said Barneys should be a home run in Boston. “There was a void here,” he said. “There was nothing of this magnitude or scope.”

Perfumer Frederick Malle recalled a brush with Boston decades ago. He was supposed to go to Harvard, following in his father’s footsteps, but opted for New York University instead. “I wanted to be near the fashion industry, photography, Studio 54,” he recalled. “My father, though, left his heart in Cambridge.”

Barneys especially wanted to thank its loyalists, who have regularly trekked to Manhattan. “This feels like the New York store, which I prefer to all of the Boston shopping,” twentysomething customer Jacqueline Mimno said.