Barneys New York Gets a Facelift in Beverly Hills

With its Madison Avenue makeover nearing completion, the retailer has turned its eye westward. 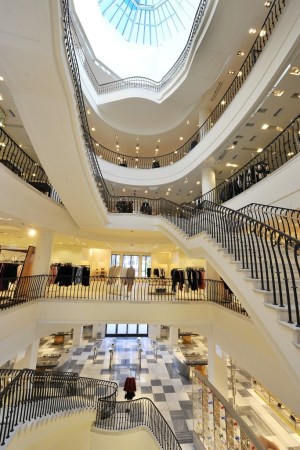 BEVERLY HILLS — Barneys New York wants to stay ahead of the competition here.

The retailer has unveiled a revamp of its 125,000-square-foot Beverly Hills flagship, the jewel of its eight-store West Coast collection.

With its Madison Avenue makeover nearing completion, the retailer has turned its eye westward and completed the remodeling of the Beverly Hills store’s main floor and men’s fifth floor, as well as installed the first Freds restaurant on the West Coast — just in time for its 20th anniversary, which the company will celebrate here on Oct. 15.

“This is our second most important store, after Madison, and a very significant business for us. It was time to give it some love,” said Mark Lee, chief executive officer, adding, “It’s completely refreshed and brought forward in the same spirit of what we tried to do in New York.”

Barneys urgently needed to redo the store because all its competitors are doing the same. Neiman Marcus, Saks Fifth Avenue and Bloomingdale’s are investing heavily in their Los Angeles stores, updating their offerings, adding technology and simply giving them a more modern look in an era when online shopping is taking more and more of consumers’ dollars.

But Beverly Hills isn’t Barneys’ only focus. The retailer plans to spend the next five years concentrating on other large markets, as well: a downtown Manhattan store is set to open in January 2016 and the company is zeroing in on a Miami location, as well as a larger home for its San Francisco store. The balance of Co-op stores will also be converted within that time frame.

Like on Madison Avenue, in Manhattan — another city where the competition is ever-more cutthroat — Barneys’ renovations in Beverly Hills are taking place floor by floor. They began last year, with a new beauty department moved to the lower level, freeing up more real estate on the main/ground level for fast-growing categories such as jewelry, accessories, handbags and shoes. The remaining three levels in the six-level store should be overhauled within the next two years.

The Beverly Hills store is unique among Barneys locations for its grand Regency-style marble staircase spanning all six levels, along with a skylight and numerous windows that allow the California sunshine to pour in. Steven Harris Architects, which worked on the Madison Avenue flagship, stayed true to the building’s bones and kept the original gray-and-white marble floor, while adding a dose of quiet luxury with rich marbles and metals, architectural dividers rather than walls, and alcoves to invite browsing, all while keeping product at the forefront. Also singular to Beverly Hills: a fifth-floor terrace at Freds boasting 360-degree vistas and overlooks of nearby Rodeo Drive and the Hollywood sign farther east.

Although Lee declined to comment on how much of the overall business comes from Beverly Hills, he said, “This was one of the first stores that came back from the recession in 2008 and 2009. It came back to 2007 volume by mid-2011 and has been growing at a strong pace since then. Having that kind of momentum before a major renovation, we are very confident.”

While the ceo also declined to reveal how much Barneys spent on the overhaul, he expects to see a quick return on his investment.

“I’ve always loved L.A., and since I’ve been at Barneys, we haven’t shined this kind of light on the city. It’s now gaining such stature and has moved far beyond the entertainment industry and now really has a place in art and fashion,” he said.

The retailer’s other Southern California locations — at The Grove, Americana and Santa Monica Place shopping centers — have also been overhauled and placed within the unified Barneys banner and sleek gray, white and metal look. Chief operating officer and senior executive vice president Daniella Vitale said, “That all needed to happen. Every store has to look like a Barneys, not just ‘Oh, this one’s a bad Barneys. We can do 10,000 square feet, and we can do 250,000 square feet, but now these stores serve each of those area’s needs.”

Los Angeles designers and the city’s impact on fashion worldwide play a big part in Barneys’ retail and merchandise approach, and will be duly highlighted at the Oct. 15 fete, which is also the store’s third annual Heart of Los Angeles fund-raiser. Rob Pruitt will be custom-spray-painting J Brand jeans for customers, and designers such as Band of Outsiders, The Elder Statesman, Irene Neuwirth, Jennifer Meyer, Juan Carlos Obando and George Esquivel will also be creating exclusives for the store. “Some of our biggest brands are native to L.A. It used to be everyone thought of L.A. fashion as denim or contemporary. This whole fashion community, who may be not that well-known to others, has always been supported by us. It’s created a culture here that’s very important,” said Vitale.

“That there is California style goes without saying,” said Tom Kalenderian, executive vice president and general merchandise manager of men’s wear, who pointed out the main changes on the fifth floor were a unified shoe department serving a destination for everything from Vans to John Lobb; a tailoring department that suggests more lifestyle and overall ensemble options, and an expanded made-to-measure salon.

“When you think about what we just saw on the Paris runways and at the men’s shows, will those events change what fashion is? I don’t think as much as lifestyle trends will, and L.A. has led that movement for decades,” he said. “The sophistication of the Beverly Hills customer is emblematic of what that means — strong confidence, mixing modernity and luxury, which is the type of business we do today. It’s about trying to meet those customers’ needs.”

As in, trimmer suits by Kiton and Isaia to highlight the workout-happy man’s fit physique, a range of shoe options, and making it an inviting environment to toggle between the fourth and fifth floors for sportswear, suiting and designer clothes.

Beyond the merchandise, local industry types are anticipating the opening of another scene-y eatery, and Freds should fill the void for another power breakfast, lunch, dinner spot in the 90210. The focal point (apart from the clients, of course) will be a four-part, 27-foot-by-26-and-a-half-foot Rob Pruitt gradient mural above the four booths in the narrow entryway leading to the main dining room — spots poised to become the key tables. “Rob is doing amazing work that’s relevant to L.A. and our audience, so it’s exciting he created this piece for us, and was game to get involved with the merchandise,” said creative director Dennis Freedman.

The restaurant also boasts two terraces, an alcove lounge in a tower with second-story windows and an impressive marble bar. The entire space continues the sleek-marble and velvet-chair look of the two new retail floors. The server uniforms are from Boy by Band of Outsiders, and their shoes are from Common Projects.

And this being Beverly Hills and Los Angeles, the entire purpose is to see and be seen. As Harris said, “A lot of this is about a kind of performance of how you arrive, how to get to your table, who you say hello to, where you sit, which is what makes a restaurant successful.”