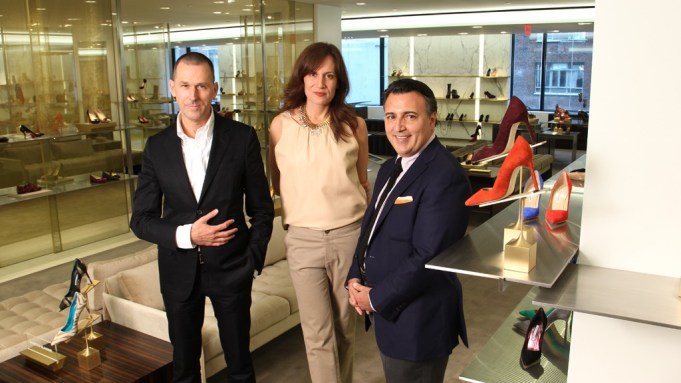 When he was in high school in the Seventies, Mark Lee, the chief executive officer of Barneys New York, spent weekends and holidays working in the shoe department of I. Magnin in San Francisco. “They told me if I could sell women’s shoes, I could sell anything,” he said. Now that Lee has found himself in the epicenter of the most cutthroat designer shoe business in the country — there are three major designer shoe salons within 12 blocks of Barneys’ Madison Avenue flagship — he is distinctly aware that it’s not enough to have the best merchandise, for which Barneys already has a strong reputation. The whole shebang has to be spectacular.

Thus, Barneys gleaming new floor opens today. A 22,000-square-foot expanse that runs the width of a city block, from 60th to 61st street, the fifth floor department brings men’s and women’s together, a vision Lee plans to implement throughout the store.

“Shopping has to be more than shopping. It needs to be an experience,” said Lee during a walkthrough of the floor Thursday. “It’s a social activity. It’s entertainment. One of our powers is that Barneys has owned men’s since 1923. We want to leverage that impact of men’s together with the power and the traffic of women’s.”

The difference between the shoe floors of old (women’s on four, men’s on the main floor and three) is striking, not just because of the men’s-women’s combination. Done under the direction of creative director Dennis Freedman and interior design firm Yabu Pushelberg, the new department is a light-filled loft setting with white marble walls, brass fixtures and neutral tufted velvet chaises and chairs; iPad stations are positioned throughout. The limestone floors are mostly covered with beige wool carpeting, while semiprivate areas marked by transparent partitions — gold brass mesh encased in glass — create dedicated spaces for leading resources. There are two such setups in the women’s department — one for Christian Louboutin, one for Manolo Blahnik, the store’s anchor brands. Lee was quick to point out that all the real estate is Barneys. “We don’t lease,” he said.

Freedman described the design concept as an open, minimalist space. “We are lucky enough to have a lot of windows so we wanted to take advantage of all the natural light that we could get,” he said. “It’s a soothing environment and the merchandise takes precedence. That’s part of the fact of a more minimalist aesthetic — the shoes take priority. They are the jewels in this store.” The decor is consistent throughout the men’s and women’s sections, which are connected by a space devoted to luggage and travel accessories, including Rimowa, T. Anthony, Serapian, Bric’s, Tumi and Barneys New York private label. Men’s classic and fashion shoes, previously housed on separate floors, have been consolidated, but both women’s and men’s Co-op shoes will remain separate on the seventh and eighth floors. “This is the way a designer shoe floor should be,” said Daniella Vitale, chief merchant and executive vice president.

“Our overall goal and intent was to create a warm and comfortable, luxurious environment,” said Lee. “It’s bigger but it wasn’t so much about making a bigger floor for the sake of making a bigger floor. If you’ve been on the women’s floor on a Saturday, sometimes women are trying on shoes standing up. We usually run out of seats — same in the men’s department. The thought was to give space and air and light and make a customer feel comfortable to spend as much time as they’d like here.”

There’s a 58 percent increase in square footage for women’s, 36 percent increase for men’s. More space means more shoes. Vitale estimated that there will be about 350 additional skus, most of which are represented by deeper buys into existing brands. “We want to make sure that we have flats and boots and ballets and sneakers, and really be able to show the full breadth of assortment that we couldn’t really show downstairs,” said Vitale, pointing out the new exclusive driving loafer program with Manolo Blahnik. “We are much more conscious of outfitting your whole shoe wardrobe up here. It’s very generous in terms of someone sitting for hours to try on shoes. If the floor is tight and you can’t sit or can’t see everything, you’re going to walk out and only buy one pair.”

Nobody wants that. What makes shoes such a hot business is the unique propensity for customers to walk out with multiple purchases. That’s why everyone in town is raising the stakes on their shoe floors, with Saks Fifth Avenue driving the competition. Its flagship eighth-floor designer shoe salon got its own zip code (10022) five years ago, and last month Saks revealed the floor’s expansion from 22,000 to 32,150 square feet, plus a host of edgy new labels, like Tabitha Simmons, Carven and Proenza Schouler. A few blocks up on Fifth Avenue, Bergdorf Goodman has carved out a thriving shoe mecca of its own.

Barneys was due to up its game. A major part of that is an unyielding vigilance toward exclusives. “Our customer expects to see things that they don’t see other places,” said Vitale. “[Exclusives] play very much into how we communicate even online. Somebody wants to know that they cannot buy this anywhere else. They can’t get it 12 blocks away.” Among the labels exclusive to Barneys, denoted by “XO” (exclusively ours) signs on the shelves, are Alexa Wagner, Narciso Rodriguez (which the store is launching for fall) and Maiyet, with exclusive styles within Gianvito Rossi, Balenciaga, Givenchy, Sergio Rossi, Manolo Blahnik, Pierre Hardy, Giuseppe Zanotti and Maison Martin Margiela. For men, exclusive brands include Sergio Rossi, Alberto Moretti-Arfango, Battistoni, Endless, Harris, Officine Creative, Franceschetti and Bettanin & Venturi. “This is one of the few products in the world where everything on this floor is either made in Italy or made in England in Northampton, where they were made 300 years ago,” said Tom Kalenderian, Barneys executive vice president and general merchandise manager of men’s wear.

To celebrate the shoe floor’s opening, Barneys has created the Perfect Pairs program in support of the Human Rights Campaign and its Americans for Marriage Equality Program. During the department’s first week, 10 percent of sales will benefit HRC. Celebrities, including Debra Messing, will be working the floor throughout the week.

Aside from the seventh and eighth floor Co-op section, the fifth floor shoe salon is the only element of Barneys’ Madison Avenue renovation that’s been completed, which is a testament to the importance of shoes. When asked what percentage of the company’s business is shoes, Lee would only say “significant.” As for sales volume per square foot, “It’s one of the most productive areas of the store,” he said. What about sales projection for the new space versus old? Lee replied, “Commensurate with the expansion of the space and the capital investment we’ve made.” Looks like it will pay off, if the walk-through with the execs was any indication. “I’m in the shoe department every day and I just found four pairs I want to buy,” said Vitale, approaching the Fendi display during the floor tour. “Yeah, it’s very dangerous.”