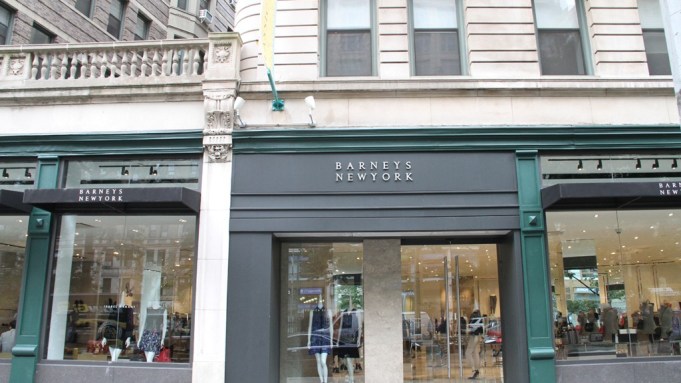 NEW YORK — The Co-op era at Barneys New York is coming to an end.

At the same time, Barneys continues its aggressive search for a significant downtown store. The retailer would not comment on potential size, but retail experts noted that it successfully operates units of varying square footage and said 40,000 square feet could be a target.

Known for its more casual mix of premium denim and contemporary brands for men and women, the Co-op concept was introduced in 1986 as a lower-priced option for younger consumers. The Co-op has since existed as freestanding stores and on the seventh and eighth floors of Barneys New York’s Madison Avenue flagship. “Lower prices was the intention when the Co-op began 27 years ago,” Lee noted. “The Co-op offered the spirit of Barneys style at a lower price before contemporary and secondary collections existed. With everything we’re doing, it’s more about the edit now. It’s about how we curate these small specialty stores.”

Small specialty Barneys stores with handpicked selections of ready-to-wear, footwear, accessories, jewelry and beauty is how Lee and his team view the converted units. Denim is still represented, but designer brands such as Proenza Schouler, Azzedine Alaïa, Marni, Chloé and Yohji Yamamoto are playing a more important role alongside Co-op staples such as Helmut Lang, ALC, Theory, Diane von Furstenberg, 3.1 Phillip Lim and Alexander Wang. The retailer found, in fact, that the lines between the dedicated Barneys New York shopper and the defined Co-op consumer have been blurring.

Co-ops were initially coed when they launched, catering about equally to men and women. In the remodeled 10,420-square-foot Upper West Side store and the 9,266-square-foot unit at The Grove in Los Angeles, which on Aug. 1 will be re-branded, men’s merchandise was eliminated to make room for expanded offerings and new designers in the women’s category. Some labels are exclusive to the chain, and all have been bought with specific locations in mind. “These are neighborhood stores,” said Daniella Vitale, chief operating officer and senior executive vice president of Barneys New York. “We’ll try to curate the stores to reflect the demographics of the area. This is a local customer in the immediate trading area.”

As Co-ops are converted to Barneys, buyers will likely have more clout in the marketplace, representing a now- larger chain of Barneys New York stores. Additional doors will increase their buys, which will help with negotiations with vendors and make meeting requirements for exclusives easier.

“This enables us to flow everything together under the same brand identity and marketing system,” said Lee.

In addition to remerchandising, all Co-op re-brandings will be renovated to represent the new aesthetic. “The consistent thread has been about creating a simple, modern envelope for the product,” Lee said.

The 10,198-square-foot Co-op on Atlantic Avenue in Brooklyn, which is slated for a facelift, will continue catering to men and women. A 15,000-square-foot Seattle unit that was never considered a Co-op, was “refreshed” to bring it in line with the current thinking. “We tweaked Seattle,” Lee said. “We increased the accessories footprint. It allowed us to fine-tune the store to match the market and allowed us to accommodate to the changing demographics of Seattle.”

Around the time of the Co-op’s 25th anniversary in 2010, the chain was said to account for between 10 and 15 percent of Barneys New York’s total sales, which then came to $650 million. Barneys has been weeding out underperforming Co-op units. The retailer last year closed Co-ops in Dallas, Chevy Chase, Md., and San Diego. Barneys in 2011 shuttered stores at the Galleria in Houston, the Westchester Mall in White Plains, N.Y., and Phipps Plaza in Atlanta. Barneys in March closed its Co-op on West 18th Street, which was also the site of its biannual warehouse sale.

“We’re looking at our other seven [Co-op] stores,” Lee said, referring to units in Philadelphia, Miami Beach, SoHo, Georgetown, Glendale, Santa Monica and Costa Mesa, Calif. “What’s left — they pretty much are keepers” for conversion to Barneys. “We’ll get another few stores [remodeled] in fiscal 2014.”

Lee said there are no plans for new stores other than the downtown location. “There’s definitely room for a store in downtown New York,” he said, adding that Barneys looked at the two major retail projects downtown, the World Trade Center and Brookfield Place, finding neither location workable. “They didn’t fit the bill,” Lee said, adding that Barneys would prefer a street presence. “We’ve looked at everything. Barneys New York is a neighborhood store. Even the Madison Avenue [flagship] is part of the neighborhood.”

The addition of resources such as handbags from Narciso Rodriguez, Pierre Hardy, Balenciaga and Chloé, scarves from La Prestic Ouiston, Sunghee Bang and Swash, and fine jewelry by Feathered Soul will allow the Upper West Side store to realize higher returns. “This store and The Grove were the two top performers under the old concept and the two biggest producers of bottom-line profits,” Lee said. “We have an aggressive plan. We should reach a higher average ticket.”

The store has been merchandised to facilitate wardrobing. “The store was not set up that way,” Vitale said, adding that sales associates are taking part in a new training program that partners them with a sales associate at the Madison Avenue flagship, who acts as a mentor.

Co-op stores had an industrial look with exposed pipes on ceilings and walls, exposed brick walls and dark, raw concrete floors. The Upper West Side store, which set the tone for other renovations, has upgraded to Terazzo tile floors, a new lighting system and new polished steel fixtures. The small shoe area, which had a flea-market feel with a vintage-looking sofa, has been enlarged to 1,000 square feet, covered in plush gray carpet and decorated with tufted gray ottomans. The store facade was opened up to make the interior visible from the street. In conjunction with the relaunch of the stores, Barneys this week is officially changing the name of its eighth-floor restaurant at the Madison Avenue flagship from Genes@Coop to Genes@Barneys.