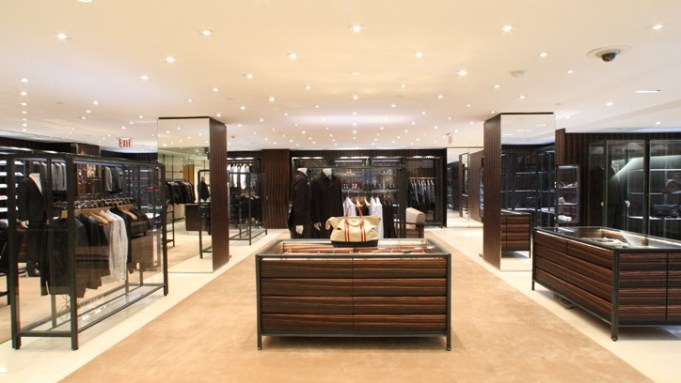 Right before Christmas, Barneys unveiled a completely transformed and enlarged shop for the designer brand on the second floor of its Madison Avenue flagship. The new shop is the only one of its kind in the U.S. and spans nearly 1,800 square feet. It is located next to the Giorgio Armani boutique.

“There had been a discussion between Mr. Bertelli [Patrizio Bertelli, chief executive officer of Prada SpA] and Barneys about how to vastly improve the presentation of the shops both in terms of ambiance and sophistication,” said Tom Kalenderian, executive vice president and general merchandise manager of men’s wear for Barneys.

The old shop measured 1,570 square feet and was in place since 1996. Although the ivory-colored shop was “handsome and unique and had endured well,” Kalenderian said, the companies had a “mutual goal to improve the presentation and elevate it in the eyes of the consumer.”

The new shop, designed by architect Roberto Baciocchi, features unusual ebony wood panels blended with antiqued metal and set off by state-of-the-art LED lighting fixtures that illuminate each of the shelves and display cases individually. Walls are clad in boiserie, cases feature darkly colored glass that are inspired by museum display cases and there are velvet couches and camel-colored carpets.

For the first time, Barneys was able to bring together the world of Prada in the new, larger space, adding shoes, accessories such as belts, socks, cuff links, jewelry, leather goods and gifts to the offerings. Prada Uomo, the main line of clothing and furnishings and accessories, is joined now by Prada Linea Rossa, the sportswear component of the collection formerly known as Prada Sport.

Sebastian Suhl, chief operating officer of Prada SpA, said, “We are very proud to unveil the new Prada store in Barneys New York — the store design concept represents the first of its kind in the United States. Sales have been strong since the opening.”

“Barneys New York holds an important place for Prada’s men’s business in the U.S.,” Kalenderian said, noting: “There are great synergies between how Prada and Barneys approach the business.” For example, he said, tailored clothing and furnishings have traditionally been a “significant part of the business, but with this increase in linear and hanging space, we have the ability to increase the business significantly. This is going to be the place to buy Prada in New York.”

Barneys was able to increase hanging space by 40 percent and folding space by 75 percent, Kalenderian said. “We’re telling the full story of Prada in one comprehensive place. This shop gives us the opportunity to make a statement and maximize the business.”

Although he declined to provide a projected growth figure, Kalenderian said: “Relative to our very conservative approach to business planning in this economy, we believe this brand has more opportunity than other brands.”

The shop officially opened on Dec. 17 and, since that time, the spike in business has been “substantial,” Kalenderian said. While the shop was under construction, the merchandise was housed on the third floor with other designer labels such as Lanvin, Gucci and Dior. “We’re preparing our business for the future and we see this brand as a natural asset. Prada is a leader, an innovator and a creator of ideas.”

Kalenderian said Prada men’s wear is offered in other areas of the store as well, but the merchandise in the shop is curated especially for the boutique.

Although tailored clothing and furnishings will continue to be the strongest performers, Kalenderian said he expects the “sportswear penetration to grow here too simply by the introduction of more categories.” And since the shop’s opening, accessories have experienced the “biggest increases,” he said.

Overall, 75 percent of the sales in the shop come from apparel, 16 percent from accessories and 9 percent from shoes, Kalenderian said. Specifically, tailored clothing is 52 percent of sales; sportswear and outerwear, 25 percent; wovens, 13 percent, and sweaters and knits, 8 percent.

Kalenderian said there are no plans to open similar shops at any of Barneys’ other stores around the U.S. since those units are smaller than Madison Avenue and merchandised differently. “But here, we took advantage of the opportunity to provide a much more impressive offering,” he said.