The result is a bright and airy presentation of well-known and artisanal brands that cross all categories of business, from classic to designer. 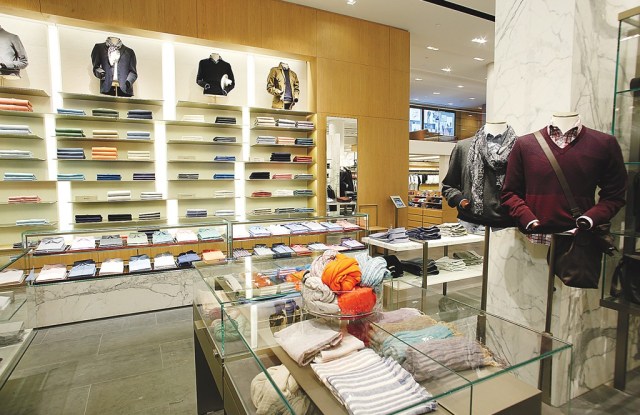 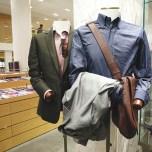 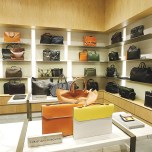 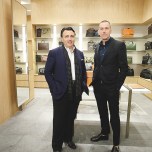 NEW YORK — Barneys New York is breaking down the barriers.

After nearly two years of work, the upscale retailer has completed the renovation of the ground-floor men’s accessories department at its Madison Avenue flagship. The result is a bright and airy presentation of well-known and artisanal brands that cross all categories of business, from classic to designer. It also marks the continued “cross-pollination” of the separate men’s and women’s stores by widening the access and adding some crossover brands such as Hermès watches and bags from Bottega Veneta and Valextra as a bridge between the two buildings. A new revolving door was also added to the men’s main entrance to mimic that of the women’s store.

“There were temporary walls going up and down for 23 months,” said Mark Lee, chief executive officer of Barneys. “But out of chaos comes beauty.”

He said the project started in July 2011 in the women’s store and, with a few breaks for key selling periods, the men’s side was completed Friday. “It’s a great milestone,” Lee said.

The floor was designed by Yabu Pushelberg and uses similar materials as the women’s main floor, but with some masculine touches such as mirror-polished stainless steel, white oak paneling, white statuario marble and an augmented lighting system.

Lee said a “wide, horizontal space” has replaced what “used to be a five-foot doorway” between the men’s and women’s stores. “This makes for much better flow,” he said.

The retailer remained mum on what is spending to revamp the flagship, which opened in 1993. However, since Lee joined the company as ceo in 2010, Barneys has been on a reinvention campaign — and seen an ownership change with Perry Capital, managed by Richard Perry, becoming majority owner, and The Yucaipa Cos., another key lender run by Ronald Burkle, as a minority owner. The debt-for-equity deal in 2011 cleaned up its balance sheet, wiped out practically all of its $550 million in debt and gave Barneys the wherewithal for some capital improvements.

Amidst that, Lee has spearheaded significant changes in the executive team and merchandise offerings, and has worked to add new and exclusive labels. The renovation of the flagship is another significant piece of that puzzle. So far, in addition to the ground floor, Barneys has also completed the renovation of its men’s and women’s Co-ops on the eighth and seventh floors, respectively, and opened a large new shoe area on the fifth floor. Lee has said the 230,000-square-foot store will continue to be renovated at the pace of “a couple of floors a year.”

In August, the sixth floor, which houses classic men’s clothing on one side and women’s designer merchandise on the other, is expected to be completed, at which point the walls between the stores will be eliminated there as well.

When the entire renovation project — believed to be in the multimillion-dollar range — is completed, Barneys will have an eight-level men’s store, which Lee said is “unprecedented — that’s an incredibly unique and powerful statement in terms of men’s.”

Lee added that the company, which began life as a men’s store in 1923, views 2013 as “an important year for men’s” with a continuation of the success it has been having in the category. “Men’s has been going well,” he noted. “We’ve seen strong growth in footwear and accessories, and the men’s designer business is on fire. Although women’s is consistently a little faster, men’s is definitely holding its own.”

Although he declined to say how much more volume the renovation is expected to add, Lee said the project “will be very important” to the future of the men’s business in the store.

He said that despite the “massive disruption” of the ongoing construction, which resulted in 25 to 30 percent of the floor closed at any one time, the department has experienced a “significant bump” in sales. “Business is way up,” he said.

With the completion of the project, Father’s Day on June 16 and the upcoming holiday season, Lee expects sales to continue to strengthen. The “overriding goal” of the revamped accessories department, according to Lee, is to retain the store’s history as a haberdashery, but make it more relevant to today’s man.

“The power of Barneys men’s area is that we can carry everything from Kiton and Brioni to Dries van Noten and Balmain. We have an incredible range, from classic to more modern fashion, so for us, the goal was to offer curation and modernity.”

Lee said, until now, there was an “artificial barrier” in the store between classic and designer labels. But today’s shopper is comfortable blending both, and even traditional vendors such as Brioni and Kiton have modernized their offerings. “We just let the product speak for itself,” he said.

Tom Kalenderian, Barneys long-time executive vice president and general merchandise manager of men’s wear, said the old accessories floor did offer designer labels, “but they were not presented cohesively as one thought.” The renovation allows the store to highlight brands such as Christian Louboutin, Saint Laurent, Balenciaga and Prada.

Rising above the main accessories department is an area that is being billed as The Mezzanine. “We created an icon for it,” said Lee of the newly designed logo for the space. “We love icons.”

Formerly home to the store’s luggage assortment, it now offers made-to-measure shirts on one side and a seating area on the other where customers can relax, charge their mobile devices and watch a scrolling screen of images from the retailer’s catalogues and advertising campaigns.

On the screen as in the store, contemporary brands are mixed with classic offerings such as Alden and Bettanin & Venturi shoes. “Artisan product is now considered fashion,” said Kalenderian. “And this is the way people dress today — very eclectic, but very natural. It’s a way to articulate fashion in a new way.”

In the past, Lee said small leather goods were “dramatically underspaced — that’s one of the biggest changes.” The space devoted to sunglasses was tripled and the fragrances and cosmetics area was doubled.

Kalenderian said that in addition to the shirts, ties, underwear, socks, watches, jewelry, small leather goods and fragrances, there is a smattering of ready-to-wear on the floor. Knitwear from Malo, Fiorini and Barneys New York, Boglioli jackets, Incotex pants and an assortment of sport shirts are all featured. “We’re treating them like accessories,” he said, noting that the easier access to the women’s store is expected to boost business since these items are easy for a woman to buy for the man in her life. “There’s an enormous gift opportunity,” he said.

Overall, Barneys believes the mix on the floor will lead customers to a “sense of discovery.” Lee pointed out that there is an absence of shops-in-shop on the floor. “It’s Barneys and it’s a beautiful envelope for our best product.”

In addition to the revamped main floor, Barneys today will launch a dedicated men’s Instagram channel under the name BarneysMan. It will be similar to the BarneysNYOfficial account but with content more skewed to a male audience. It will include in-store photos of product, employee snapshots, photos of men’s lifestyle pieces and street-style images, and is designed to provide an insider’s peek into the Barneys man.