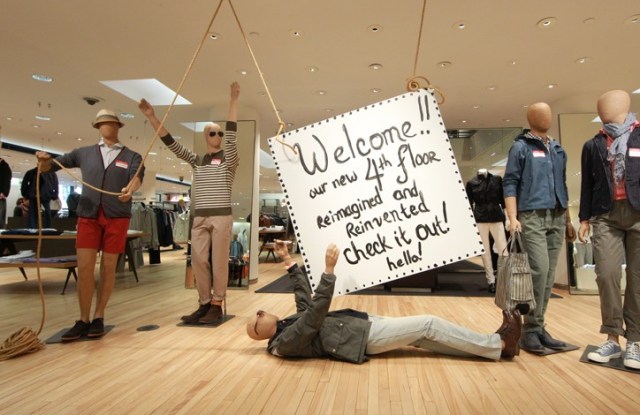 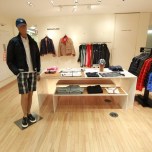 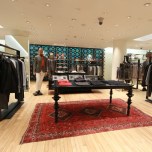 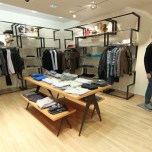 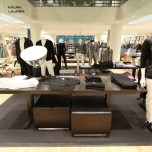 NEW YORK — Barneys New York has identified contemporary sportswear as a category with significant growth potential and has revamped the fourth floor of the Madison Avenue flagship here to seize the opportunity.

“This is a real then-and-now story,” said Tom Kalenderian, executive vice president and general merchandise manager of men’s wear for the upscale retailer. When Barneys opened the flagship in 1993, the floor concentrated on contemporary tailored clothing. In 2002, it shifted focus to offer sportswear from such vendors as Kiton, Hickey Freeman, Battistoni, Zegna, Giorgio Armani Collezioni and John Varvatos in an attempt to capture the leisure needs of that clothing customer.

Since then, the customer has “evolved” significantly, prompting a response from the retailer. “We’re dealing with a much more sophisticated guy than we were 10 years ago,” Kalenderian said. “This is the floor where you buy things for when you’re off duty. It’s contemporary and comprehensive.”

In 2002, the floor carried 10 vendors; today, there are around 50, many of which are exclusive to Barneys. These include Barena, Chimala, Diesel Black Gold, Post O’alls, Gitman Vintage, Inis Meain, JanSport, Duluth Trading Co., Grown & Sewn, Gloverall, S.N.S. Herning, Schott NYC, Moncler Grenoble and Massimo Alba. Some have already arrived, while others are on tap for fall.

The floor is anchored by Ralph Lauren Black Label, RLX, Armani Collezioni, John Varvatos Collection and Star. There’s also a section for James Perse, whose knitwear has been blown out to service the customer who buys multiples of this line.

“As the customer evolved, so did how we addressed his needs,” said Jay Bell, vice president and divisional merchandise manager of designer collections and contemporary sportswear. The men’s team worked closely with vendors to find product to appeal to a more fashion-savvy man who is comfortable mixing and matching pieces to create his own look.

They also scoured the world for unique brands such as Grown & Sewn, which produces chinos from the original fabric mill in North Carolina; The Stronghold, an artisinal denim brand from California, and Massimo Alba, which offers unique washed and distressed sportswear pieces. Barneys also challenged its vendors to step out of the box. Inis Meain, an Irish brand famous for its hand-loomed fisherman’s sweaters, has created an entire sportswear collection. The same with Moncler, which has moved beyond its signature puffer jacket into a comprehensive offering.

The assortment has allowed Barneys to “introduce a boutiquelike element to this floor,” said Bell. It also necessitated a complete revamping of the physical space. “Our original inspiration was an architect and his loft,” said David New, executive vice president of creative services. “We wanted to make everything as airy as we could.”

The new design “brings the customer closer to the merchandise,” Kalenderian said. “It’s a more-analytical use of space.”

Out went the heavy fixtures and dark woods that marked the space in the past. In its place, Barneys created a lighter, more open sensibility, employing ceiling-based fixtures and other pieces that allow for flexibility in the merchandising. Because the floor offers a “very strong mix of core collections and key items,” that flexibility is “one of the most valuable tools for us,” Kalenderian said.

Although the selling space was reduced marginally — dropping to 6,890 from 7,180 square feet — the fitting rooms were expanded and revamped into what New called “a flashy, James Bond, clublike” feeling, complete with reproduction Scalamandre zebra wallpaper and leather seating.

Barneys would not provide a volume figure for the newly revamped floor, but Kalenderian said the company invested in the contemporary sportswear area because it believes “it has a great opportunity to grow. We’re expanding this category in all our flagships and the success could push us to redo other parts of the store in the same way.”