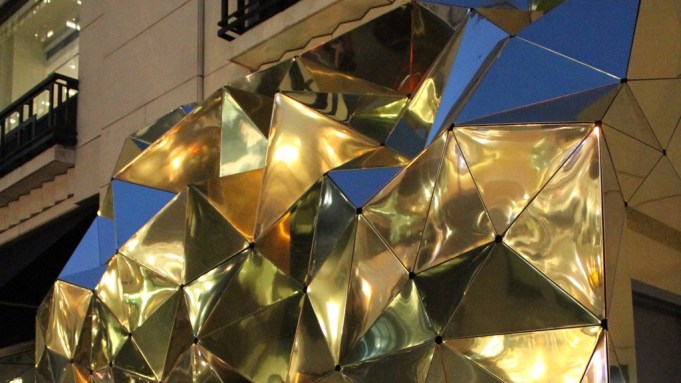 Have a very post-modern holiday.

That message comes from Barneys New York and the “New York Holiday”-themed windows it unveils today at 10 a.m. at the Madison Avenue flagship and on the retailer’s Instagram channel, BarneysNYofficial. A 10-second video clip of each of the four windows will highlight the interactive and multidimensional elements featured in the installations. Barneys said the social media-focused launch of the holiday windows will make them accessible to a worldwide audience beyond Madison Avenue.

The windows are at once high tech and artistic, detailed and sleek.

One window, called “Floating City,” could be a futuristic vision of Manhattan. At one end of the island are jagged mountains. At the other end, there’s a geodesic dome. In between are skyscapers. The 3-D model of the city was made out of paper and looks like it’s floating in space. Light is projected, calibrated and mapped onto the paper. The sequence begins with stars projected onto the background. The color of the city then changes from white to brown and yellow, and finally, white as snow falls. The display will be accompanied by a special sound track. The entire window is covered by a gold three-dimensional structure. Shoppers enter through one door to view the display and exit from another.

Another window features a fantastical ride through New York. Shoppers can take part by entering the actual window and “riding” the BNY NYC Santa’s sleigh, which looks something like the Batmobile. One LED screen facing passengers displays constantly moving patterns. A camera takes four pictures of sleigh riders and sends them to a shopper’s email address so that they can be shared on social media. The photos can also be printed out and picked up on the ninth floor of the store.