As BCBG Max Azria opens stores in anticipation of an initial public offering, the company continues to hone its retail prototype. 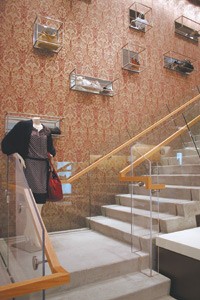 NEW YORK — As BCBG Max Azria opens stores in anticipation of an initial public offering, the company continues to hone its retail prototype. The latest and most fully realized example can be found at 168 Fifth Avenue, between 20th and 21st Streets, in the Flatiron District here.

The 7,800-square-foot store, one of the biggest in the chain, is in a landmark building with a facade that had to be rebuilt. The company used what it inherited to good effect. An exposed brick wall on the second floor serves as a backdrop for fixtures mounted onto glass panes over the brick. A focus on natural elements carries through to the oak floor, which was flamed in Denmark, and to the pebbles strewn at the foot of displays. In one area, a sisal carpet has been inset into the floor.

The two-level space has a double-height atrium hung with a half-dozen different chandeliers. There’s also a dramatic floating glass staircase. The wall behind it is covered in a vintage wallpaper pattern suggested by Lubov Azria, creative director and wife of founder Max Azria. “It’s very eclectic-looking, it’s modern and vintage,” said Christopher Love, vice president of architecture and construction. “It’s about having light and the movement of light.”

Evening and day dresses are on the second floor. A room with brick walls at the back of the floor holds the Max Azria collection. “Only 10 to 15 of our top stores have the collection, including this store and Rodeo Drive,” a spokesman said. A small deck off the second level will have seating for shoppers and significant others.

BCBG Max Azria Group’s expansion is aggressive, with 50 stores set to open in the U.S. during the remainder of the year. The firm’s IPO is likely to occur in six to eight months.

“We’ve been looking at the Meatpacking District but still haven’t found an ideal location,” Max Azria said in an interview. “Ultimately, I envision 11 stores in total in Manhattan.” The company, which has six stores here now, will add two more this year, on the Upper West Side and the Upper East Side.

By the end of the year, the company should reach $1 billion in sales, including wholesale, retail and licensing programs such as a private label collection for Dillard’s.

BCBG Max Azria has also been active on the acquisitions front. The company purchased Alain Manoukian, a French retailer with 300 stores, and Don Algodon, a Spanish chain with 70 units. “The reason for the purchases is to have better penetration in European markets,” the spokesman said.

The company’s portfolio of brands, which includes Hervé Leger Couture, Dorothee Bis, Parallel and BCBGirls, among others, is part of Azria’s long-term goal “to create a fashion empire with a portfolio of international brands and establish BCBG Max Azria as global force.”