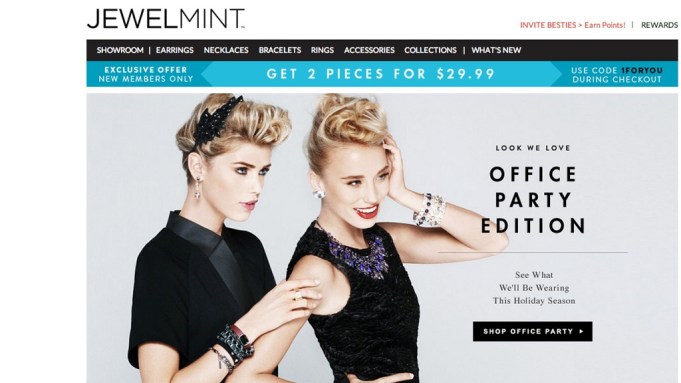 LOS ANGELES — As speculation continues to rage about the fate of online subscription players, BeachMint maintains it will carve out a long-term place in the segment by concentrating on fashion.

To that end, the Santa Monica, Calif.-based company has hired Michelle Lee as general merchandise manager. Prior to her post at BeachMint, Lee was a gmm for retail in Kellwood’s contemporary brands division and the director of retail, merchandising and licensing at Seven For All Mankind.

“Women find great value and great quality in the products that we put into the marketplace. That is something we are very proud of, and we want to continue to make sure we deliver for the end consumer,” said chief operating officer Greg Steiner, who joined BeachMint in August after 11 years at eHarmony. “Right now, Michelle is really focused on StyleMint and IntiMint. We think there is so much more we can do in those categories.”

Two of Lee’s top priorities are enlarging the repertoires of StyleMint and IntiMint, and introducing pieces at prices above StyleMint’s and IntiMint’s opening points of $29.99 and $19.99 a month for members, respectively. StyleMint is the venture BeachMint launched with Mary-Kate Olsen and Ashley Olsen in July 2011 starting with T-shirts, and IntiMint is BeachMint’s intimate apparel arm that launched last June with Brooke Burke-Charvet as creative director.

Lee noted that the number of styles released monthly on StyleMint will increase from around eight to 12 in the coming months. Expanding into additional categories has already elevated StyleMint’s prices. For holiday, Lee mentioned that StyleMint premiered cashmere pieces priced at $89.97 and outerwear priced at $149.95.

Discussing customers’ receptivity to the more expensive items, Lee said, “I think that they can definitely afford it. A lot of our customers are in heavily-populated metropolitan areas, which tells me that they are an aspirational customer around a lot of different brands, and they are doing the high-low mix.”

Although BeachMint founders Josh Berman and Diego Berdakin told WWD last year new verticals would be inaugurated quarterly, the pace of vertical launches has slowed. For now, Steiner said BeachMint’s emphasis is on the four existing fashion verticals: StyleMint, IntiMint, JewelMint with Kate Bosworth and stylist Cher Coulter, and ShoeMint with Rachel Bilson and stylist Nicole Chavez. The other two verticals in BeachMint’s portfolio of six are BeautyMint with Jessica Simpson and aesthetician Nerida Joy, and HomeMint with Justin Timberlake, and designer and stylist Estee Stanley.

Among the verticals, ShoeMint was the biggest in October, and Steiner said it is “growing rapidly.” BeachMint began running ShoeMint television ads in September, which have contributed to its growth. A question mark hangs over JewelMint, a close second to ShoeMint in sales, because Bosworth’s two-year deal with BeachMint ends this year. Steiner declined to comment about whether Bosworth would stay on at JewelMint.

At a recent luncheon to celebrate ShoeMint’s one-year anniversary at the restaurant Laurel Hardware in West Hollywood, Calif., Bilson seemed ready to re-up after her two-year contract is finished. Asked if she and Chavez would continue with BeachMint, she said, “I really hope so because we do enjoy it.” Elaborating on what they’ve learned during the first year of ShoeMint, Chavez said, “The girls want a statement shoe. They want the leopard. They want the impact shoe, the shoe that’s going to show stop.”

At its existing verticals, BeachMint is pushing membership integration. Thirty percent of BeachMint’s members currently overlap verticals. The 70 percent of members who don’t overlap represent significant potential business for the company. It has been experimenting with various integration initiatives such as making BeachMint insider reward points applicable to all verticals and allowing online log-in information to work for every Mint.

“Our overall company goal is to figure out cross Mint to make sure that our current members are happy and are able to shop an entire look. That is an opportunity we have for all our Mints. We don’t want them [members] to go to another site,” said Lee.

Verticals are unique to BeachMint among its competitive set, but the subscription model is not. ShoeDazzle, a pioneer in the online shoe subscription niche, has abandoned the subscription model, as has Sole Society. BeachMint and JustFab are testing methods of incorporating non-subscribers who pay more than their subscriber counterparts. “There is some benefit for us to open it up if a woman wants to buy one pair of shoes or one piece of jewelry,” said Steiner.

With the subscription model, still hot for digital start-ups, under the microscope, reports surfaced in September that ShoeDazzle and BeachMint would merge. Industry sources estimate that BeachMint, which has raised around $75 million in venture funding, has generated roughly $40 million in annual revenues. It has not turned a profit. Sources estimate ShoeDazzle is at least double the size of BeachMint in sales.

About a possible merger, Steiner said, “The companies are not in active discussions. Never were.”

Steiner, who said BeachMint’s revenues have jumped 300 percent this year, has high expectations the moves BeachMint is making will amp up its volume. “The company should double if not triple next year,” he said. Peeking further into the future at potential exit strategies for BeachMint, he added, “There is no reason to believe that we can’t be an independent company as a private company or publicly traded. We also know we are creating things that are appealing to manufacturers and traditional retailers. The appeal is pretty broad. It is something I would be better suited to answer a year or two or three from now.”