Beauty Beat: Guerlain Pops Up on the Champs-Elysées

The new locale has drawn in young women among its clientele since it opened on May 7, he said. 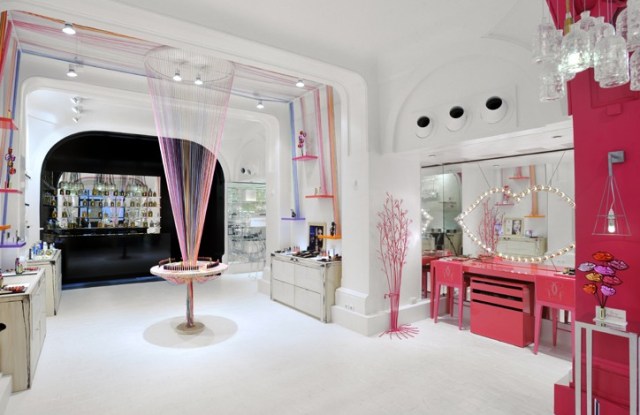 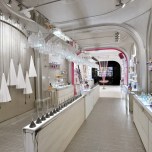 Located next to the LVMH Moët Hennessy Louis Vuitton-owned brand’s stately flagship, at number 68, the two selling spaces are to be merged by the end of 2012 or in early 2013. At that point, the Guerlain retail area will be effectively doubled, to approximately 11,110 square feet.

Laurent Boillot, Guerlain’s president and chief executive officer, said carte blanche was given to interior architect Patricia Grosdemange to design the pop-up store, called Ateliers Guerlain, and that the result is full of freshness and gaiety. The new locale has drawn in young women among its clientele since it opened on May 7, he said.

Grosdemange, who worked with artists and designers such as Nathalie Auzépy, Catherine Carrée and Maryse Dugois-Guillopé on the project, said Ateliers Guerlain “shows another face” of the brand.

There, products are represented in an offbeat fashion. Lipsticks, for instance, stand on a round table from which multicolored strings emanate to the ceiling. At a long, central rectangular counter of rough-hewn wood, people can test different fragrances wafting inside bell-shaped gizmos. There’s also an area devoted to Shalimar Parfum Initial women’s scent, one (replete with a mirror decorated with lights in a huge lip shape) to Guerlain creative director Olivier Echaudemaison’s makeup and another focused on skin care, among the various sections.