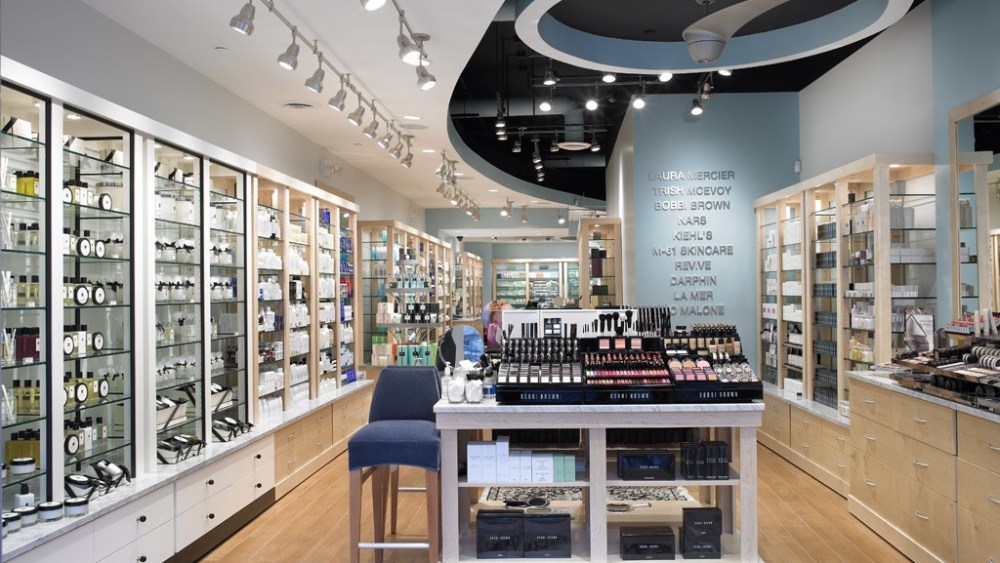 There’s a home improvement boom taking place in beauty chains across the U.S. — and it’s intended to rattle the foundation of department stores.

The leading specialty chains — Sephora and Ulta included — are busy overhauling existing stores and opening new locations in a bid to unseat department stores as the number-one purveyor of prestige beauty.

The retailers’ ambitions are huge: Ulta plans to open 1,200 doors, up from its original target of 1,000; Sephora wants to be the market-share leader in prestige, and Bluemercury aims to move deeper into the ultraluxury space, all while pursuing its ultimate goal of 300 locations. The latter is on track to open eight to 10 new stores this year. “As landlords get nervous, we get aggressive,” said Marla Malcolm Beck, chief executive officer of Bluemercury. She was referring to pressing harder on leasing space.

Piper Jaffray analyst Neely Tamminga, who covers Ulta, said, “The rise of Gen-Y is pushing some of this development. This customer is far more educated on the need for preventative skin care and they are seeking innovation. They are also channel agnostic. They just want the best curated collection in beauty: enter Ulta, Sephora and dot-com.”

And, so it seems, Walgreens. In the din of the hammering and power tools, Walgreens is emerging as a surprise but formidable player. The drugstore continues to move beyond its mass market heritage as it opens more Look Boutiques across the Duane Reade chain, adapt the concept for its own nameplate and align itself with British retailer Boots. Today, there are about 40 Look Boutiques, but plans call for “several hundred” over the next few years, said Joe Magnacca, president, daily living products and solutions at Walgreens.

Sephora and Ulta, for their part, emerged from the recession full of gusto — and over the last five years have put increasing pressure on department stores.

Sephora plans to see to it that that trend continues. “Between Sephora’s freestanding stores, the growth of Sephora inside J.C. Penney and sephora.com, at some point we should have the number-one market share in prestige beauty,” said David Suliteanu, president and ceo of Sephora Americas. “But I couldn’t tell you when.”

To get closer to that goal, Suliteanu is orchestrating sweeping changes inside existing Sephora stores, along with opening new locations, particularly through its partnership with J.C. Penney Co. Inc. Sephora plans to end the year with 386 shops inside Penney’s. And it continues to open anywhere between 25 to 40 freestanding stores each year. Sephora also continues to ramp up its digital strategy — sephora.com is already the largest prestige retailer in the world, according to Suliteanu.

“We have this healthy balance of putting stores where they are needed on a consistent basis and making considerable, large investments in existing stores to elevate the client experience,” he said. “It’s the heart of our strategy.”

Inside the newly remodeled Sephora store in SoHo, shoppers buzzed around the sleek displays, played with electronic tablets, preened in oversize mirrors, squeezed BB creams (short for beauty or blemish balms) into the backs of their hand and meandered through the spacious Make Up For Ever boutique. Displays touted the “Nail Studio,” “What’s Hot Now” and “Sephora Favorites,” which group together multiple brands in one category, for instance face primers or mascaras. Everyone was in motion — testing, applying, browsing and, most importantly, buying.

The store is an illustration of Suliteanu’s vision of edging out the competition by investing heavily in Sephora’s existing stores across the U.S. and Canada.

“Over the last five years, we’ve actually devoted more energy and resources into our existing real estate to make sure the majority of our stores represent our latest thinking. Our latest thinking is evolving so fast that it pushes you to swing that investment needle more toward your existing real estate,” he said. “Our growth rate hasn’t changed that much, but what has changed is the number of ways in which we’ve evolved the client experience and the energy and investment that we’ve made to support those ideas. That part of the model has definitely ramped up.”

In his view, there’s a simple metric to gauge success: same-store sales. “If you are winning at the individual store level, you’re winning the [comparable] store battle. Over the last 10 years, we have consistently been at the top, in terms of comp-store sales.”

During the most recent earnings call for its parent, LVMH Moët Hennessy Louis Vuitton, Sephora’s same-store sales in the U.S. were 14 percent in the first quarter.

“When I first came to Sephora in 2000, we had 67 stores. In 12 years, we’ve increased the store count by a factor of five. The business [in terms of sales] during that time period has grown 14 times. That is a testimonial to the tremendous importance of keeping your eye on existing stores, improving the client experience there and winning the comp store battle one store at a time,” he said. “We’ve made a commitment to continual upgrades in the client experience.…And, unlike some of the competitors, we are 100 percent focused on prestige beauty. The product approach at Sephora is like no other. We are focused on exclusive and hot products.”

But, Suliteanu is not the only one on a home improvement kick.

Construction also is under way at Ulta Beauty — a hybrid beauty retailer that sells mass, prestige and salon products and salon services under one roof. Chuck Rubin, the retailer’s president and ceo, is bent on improving its current 467 locations, while opening more — much more. Last month, Rubin said his goal is to build a 1,200-store base, up from Ulta’s previous goal of 1,000. This year alone, Ulta will open 100 doors, he noted.

The 1,200-store-count goal does not include the potential for a smaller concept — Ulta is currently testing two 6,000-square-foot locations, but will not disclose where — or an international format, which is only a possibility at this point.

“When you look at the beauty industry, we are clearly opening more doors than anyone, hands down,” said Rubin. “We fully believe in our growth. We are fully convinced that there are customers waiting for what we do. However, we are pursuing this growth with quality paramount to quantity. We’ve been very clear that quality reigns supreme to quantity. We have 1,200 stores we think we can build — people always want to know when we’ll reach that goal. The answer is I don’t know.”

“Now we know that there are pockets of demand for what we bring to the market, and the cost structure is lower so it allows us to have a very profitable store with potentially a lower sales threshold. Those two things have combined nicely to increase what we think is the potential build out for our stores,” said Rubin. “Today, it’s about $900,000 to open a store, and that’s come down significantly over the last couple of years. And we are not taking anything out of the experience — in fact, we’ve added — but we’ve been able to engineer it so its more cost effective. It gives us flexibility to go into smaller markets.” In Rubin’s view, those markets include pockets of Chicago, where Ulta already has nearly 40 doors, and underpenetrated cities, including Boston; Seattle; Portland, Ore.; Los Angeles; San Diego; Miami, and Tampa, Fla., as well as areas in between the coasts.

As Ulta continues to dot the U.S. landscape with its nameplate, it inevitably heads deeper onto its competitors’ turf. But Rubin is unfazed.

“The foundation of what we do is different. We are the only player in the U.S. that puts the four major segments of beauty into one place to shop: mass, prestige, salon services and salon products. You can find individual components of that elsewhere, but you will not find it one place anywhere except Ulta. Add to that a really good loyalty program, and a really good shopping experience — online or in store — with noncommissioned sales associates. And that’s a distinguishable experience for the customer when we go into a market.”

Ulta units are generally located in strip malls, and in some cases shopping malls.

“We do equally well in the suburbs of key urban markets, and that’s where the opportunity is rich for us,” said Rubin.

Ulta’s current 10,000-square-foot concept includes six to eight boutiques, which more often than not showcase a prestige brand such as Bare Escentuals, Benefit Cosmetics, Dermalogica and Lancôme. In some instance, the boutiques spotlight a category, such as its men’s shop.

Mottus of Mottus & Associates notes it takes an enormous amount of cash flow to open new doors, particularly while renovating existing ones.

“The question is can anybody ignore the battle between Sephora and Ulta? In my book you can’t,” he concluded.