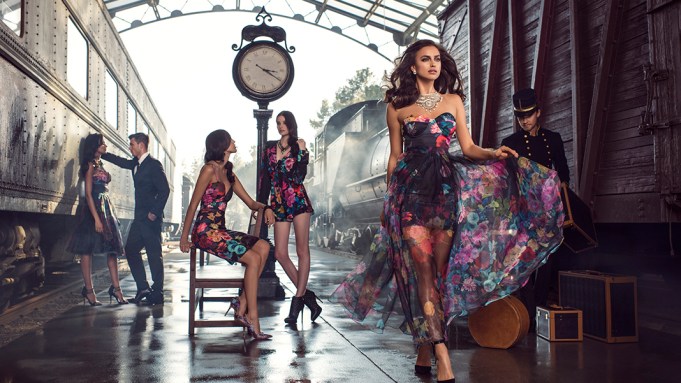 Bebe Stores Inc., wanting to be taken more seriously, has toned down its party-girl image.

The repositioning of the specialty chain to a lifestyle concept is the brainchild of Jim Wiggett, who became the company’s chief executive officer in December. And while partying is no longer the primary focus, the customer is still rocking her Bebe frocks, but now she’s just as likely to be in dressy casual, business chic, Bebe Sport and logo apparel. With Brigitte Bogart, executive vice president of design, heading the design team, the current styles aim at being more fashion forward. In that sense, Wiggett’s plan is in keeping with the Bebe DNA, targeting the same woman between ages 20 to 40 who likes sexy clothes that accentuate her curves and wants to be noticed.

“When I came to the company a year ago, within weeks the company reported a significant loss for the fiscal year. The company was losing $4.5 million a month,” Wiggett said.

His first executive decision was to take $30 million out of operations. Gone was its 2b concept, where the top end of the product line overlapped with the lower end of the core Bebe assortment. Another change in the shift to a lifestyle brand included designing for a collection, instead of just pieces to have on the sales floor. That also meant thinking through  design, fabrication and sourcing. Wiggett called the old design thinking “sausage making,” and explained that it was largely the effort of how to dumb down a product from taking away one button to having a similar item, but in a different fabric, as a way of showing newness.

“The company had 12 seasons. Every month there was a new collection when I got here. The designers and merchants were on a treadmill. We slowed that down and eliminated four seasons, dropping to eight [and having] each season six weeks long. Merchandise is flowed incrementally every two weeks. In doing that, we can now pay more attention to the details,” Wiggett said.

Adjusting the promotional cadence was the next step. “We had to turn the promotion gun off. There were two to three levels of discounting. Discounting is a drug because customers get used to it,” Wiggett said. The company went back to full-price selling and saw margins climb back up. “For three quarters in a row, we’ve now had positive comps,” the ceo said.

With the revamping of the assortment, its once core party dress category was brought down to just 20 percent of its business. Of the new design capsules, business chic is 20 percent, dressy casual is 40 percent, logo apparel is 10 percent and special occasion is 3 percent. Its newest category targeting the ath-leisure arena is 2 percent. The balance at 5 percent is footwear and accessories. Party and business chic tend to have higher price points. Store assortments and adjacencies were adjusted to showcase the new capsules because “women shop in the stores for a purpose; they have a goal in mind,” Wiggett said.

The new operating model also has the store “chasing sales” on the theory that leaving a few dollars on the table is better than being overstocked and then taking deep discounts at the cost of lower margins to clear the sales floor.

“Our product is not mass-produced or bought. The herding effect is dying as a dynamic. Women want to have their own look; their own personality showing through. We are well positioned to feed that. If an item is gone in six weeks, we won’t replenish it. They don’t want to run into [themselves],” Wiggett said.

According to Liyuan Woo, the company’s chief financial officer, the new collection is backed by a marketing spend to highlight the offerings and ensure a consistent message across all channels of advertising, whether print, digital or via social media. The assortment mix reflects Bebe’s focus on the other components of its customer’s life, with party dressing almost an after thought that’s still available at Bebe if she wants it.

She added that the company is also focused on “getting the right merchandise to the right customer base.” That means that urban stores are more likely to have a higher component of business chic, while suburban stores might be more focused on dressy casual.

According to Woo, there are 165 Bebe retail stores and 36 Bebe outlet stores. The company plans to add 38 outlet locations by fiscal year 2018, bringing the total to 74 sites.

On May 7, the Brisbane, Calif.-based chain posted improved third-quarter results in which it narrowed its loss to $11.2 million, or 14 cents a diluted share, from a loss of $24.3 million, or 31 cents, in the year-ago quarter. Net sales rose 4.1 percent to $92.7 million from $89 million, as comparable-store sales gained 1.2 percent. Gross margin was 30.4 percent compared with 27.5 percent in the same year-ago quarter. The company will report fourth-quarter and fiscal 2015 results Aug. 27.

Aiming to compete against contemporary brands such as L.A.M.B. and BCBG Max Azria, executives at Bebe believe they’ve found the right operational model for growth. It’s already in 25 countries with 10 partnerships and is looking to expand internationally. The outlet business, of which 65 percent of product is made for outlet and the balance clearance styles from Bebe stores, is thriving with prices 30 percent to 40 percent off from what they might have sold at a Bebe full-priced boutique. The company is also looking to grow wholesale, expanding its branded product line into other retail operations. Wholesale product, Wiggett said, are specific to the channel so as not to cannibalize its core Bebe business.

One advantage Bebe has is cash to fund the turnaround, and the retailer has assets that can be liquidated if it needs more to complete the restructuring, Wiggett said. The company carries no debt on its balance sheet.