Bed Bath & Beyond is taking a dip on the green side with Verdi Market, a new natural and organic section the retailer is testing out in its Chelsea store. 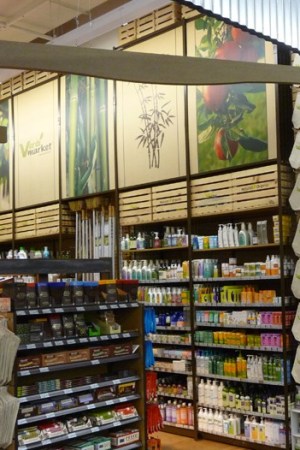 Bed Bath & Beyond is taking a dip on the green side with Verdi Market, a new natural and organic section the retailer is testing out in its Manhattan Chelsea store.

Verdi Market, which appears to measure approximately 500 square feet and is located near the retailer’s Harmon store-in-store area, features a variety of naturally positioned and organic products, from Seventh Generation diapers and Paul Newman salad dressing to Kiss My Face shampoo.

The Union, N.J.-based retailer declined to comment on Verdi Market, but an employee at the 620 Sixth Avenue store said the “green” section was the only one of its kind within the chain and is meant to gauge consumer response to a dedicated natural set, which was implemented in October. BB&B’s move into natural care mimics several mainstream retailers’ dive into green sections, including Borders. Traditional beauty retailers, such as Macy’s and Sephora, have also begun to merchandise naturally positioned items in “green” sections.

A new study by Kline & Co. shows the natural personal care market in the U.S. generated just over $2 billion in sales at the manufacturers’ level, up nearly 19 percent from 2007. “Consumers’ desire for safer products and their concern for the environment have combined with more mainstream availability of natural products to drive growth in the market,” says Karen Doskow, associate project manager at Kline. “Bed Bath & Beyond has all of these doors, and they already have a foot in personal care with Harmon, so this is a real opportunity for them and for marketers.”

During its conference call to analysts on Tuesday the retailer announced plans to open more Harmon store-in-stores in all of its concepts, even within Buy Buy Baby doors, one of the banners the retailer operates. Bed Bath & Beyond, which operates 930 stores under that banner, did not mention Verdi Market during the call.

Several analysts reached for comment had not heard of the initiative, including Matt Nemer of Thomas Weisel Partners. But from the sound of it, he said, Verdi Market seems “interesting.”

“You have to be careful, because the demographics around that store are very different from their other stores,” said Nemer. “A lot of times these concepts don’t move outside of New York. But I don’t know. It’s interesting.”

Christine Ann Kempe, sales coordinator for Giovanni Cosmetics, said she received a call from BB&B late last year requesting samples of the company’s items. The request didn’t seem strange to Kempe, since Giovanni products are sold in their Harmon store-in-store sets. “We get requests for samples all the time,” she explained. But last Tuesday, Kempe got an e-mail from the manager of Verdi Market, explaining its concept and what it sells, and also a request for products for an in-store event to take place April 22 to celebrate Earth Day. It was the first time she had heard of the concept and that Giovanni products were part of the mix.

United Natural Foods (UNFI), the industry’s leading natural and organic distributor based in Dayville, Conn., is serving as BB&B’s distributor for Verdi Market, said chief financial officer Mark Shamber. “I don’t think anyone in our organization is really that familiar with their [Verdi Market] strategy,” Shamber added.

We are partnering as a distributor like we do with Whole Foods.”

Jane Sanpietro, vice president of sales at Kiss My Face, said UNFI would enable BB&B to stock all of the leading brands “in one swoop” as opposed to dealing with the different manufacturers separately.

“My guess is that they are just testing it out,” Sanpietro said.

Kiss My Face also is sold within Verdi Market. Sanpietro did not know many details of the concept, including whether it is meeting expectations, but said, “They have our top 40 bestsellers in the mix,” and 68 items altogether. The Gardiner, N.Y.-based company is working on doing in-store demos this spring to promote the section.

“From what we understand, [BB&B] is doing in-store flyers to support the products and a mailer, too,” said Sanpietro. “I think it’s a smart thing, a smart move. People are shopping in different ways and everyone is more into wellness and taking care of themselves.”