Bees in Their Bonnets

Easily one of the most peaceful pastimes for Los Angeles' denizens is shopping, and while the usual arcades of fashion are perfectly fine, many of today's savvy shoppers turn to any of the five Blue Bee boutiques located on Santa Barbara's trendy... 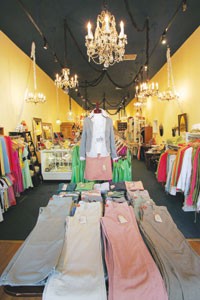 Easily one of the most peaceful pastimes for Los Angeles’ denizens is shopping, and while the usual arcades of fashion are perfectly fine, many of today’s savvy shoppers turn to any of the five Blue Bee boutiques located on Santa Barbara’s trendy shopping stroll, State Street.

Marty Bebout and John Doucette gave this once sleepy town a serious jolt five years ago by opening up an array of stores that stocked all of the Next Big Things in fashion. Their latest store, Honeycomb, carries Loy and Ford, Great China Wall and a well-edited selection of Mandalay gowns for Santa Barbara’s social set. Blue Bee is stocked with Trovata, Tarina Tarantino and Danang. Blue Bee Shoes, which Bebout referred to as “the girly glam store,” houses more Giuseppi Zanotti shoes than any Zanotti boutique, as well as Pucci and Luella and Marc Jacobs bags. Blue Bee Jeans is a sea of denim, carrying AG, Notify and Earnest Sewn (Bluebeetle, a men’s store, is just next door.)

In line with the owners’ hometown ethos, each boutique has a large following of customers who appreciate the personal attention. “We believe in a mom-and-pop store and that’s what we are,” Bebout said proudly. “We are in the stores everyday and we really know our customer. I can walk through any of the stores and see that a certain dress has been sold in a size 6, and know exactly the girl who purchased it.” With their growing retail empire, many liken the Blue Bee stores to L.A.’s Fred Segal shops. “It’s a huge compliment,” Bebout said, but then adds with a well-earned confidence, “but I like to think we’re the Blue Bee of Santa Barbara.”