Belk to Do Cam Newton Line

The Made Cam Newton collection will bear the quarterback’s signature and offer “fashion-forward, versatile, professional apparel options for men.” 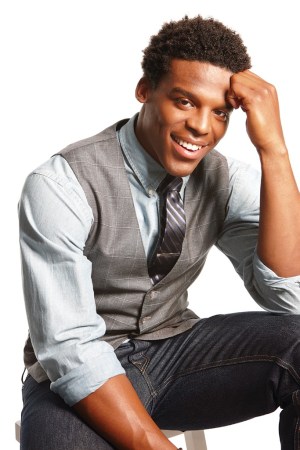 Belk Inc. has drafted quarterback Cam Newton of the Carolina Panthers for a men’s line to bolster the store’s “modern Southern style” campaign.

This story first appeared in the October 9, 2012 issue of WWD. Subscribe Today.

Beginning this coming spring, Belk will sell an exclusive men’s collection of suits, sport coats and sportswear called Made Cam Newton. It will bear the quarterback’s signature and offer “fashion-forward, versatile, professional apparel options for men,” according to Belk. Made Cam Newton will be carried in 133 stores and on belk.com, and by fall 2013, the collection will add accessories and shoes.

“It really is a collection with a young vibe in terms of mixing and matching,” Kathryn Bufano, Belk’s president and chief merchandising officer, said, noting that the collection can be dressed up or worn for a more casual look, and that items are set at better, entry-level prices including $28 T-shirts, $120 blazers, khakis for $60, and suits around $200. That’s about 30 to 35 percent lower than Polo, she noted.

Made Cam Newton will be housed between Black Brown 1826 men’s wear designed by Joseph Abboud that Belk sells exclusively in its regions, and contemporary denim. “We are dedicating nice square footage, 500 to 1,200 square feet” for Made Cam Newton, Bufano said. The suits will also sell in the suits department for double exposure. The collection is designed by Belk’s in-house team in collaboration with Newton.

“He’s not a designer but he has a very strong sense of style,” Bufano said. “He wants to set an example for young people that looking sharp gives you more confidence.”

Last year, Belk started re-branding to update its image and merchandising as a store for modern Southern style. Next year, Belk will set up 500-to-1,000-square-foot Southern Designer Showcases in 44 stores that further the strategy and focus on contemporary fashion. The designers were selected through a contest staged by Belk. The department store is also launching an exclusive collection from Cynthia Rowley, who is not from the South though she’s known for dresses and feminine, flirty and contemporary styles seen as compatible with Belk’s Southern style.

“I have a range of styles, but nothing flamboyant,” Newton told WWD. “I’m not into bow ties or suspenders, or pinks or purples. I’m more into sweater vests, clean slacks and blazers. I like preppie style sweaters. You’ll see me in a suit and tie, things on the traditional side. That’s how I was raised. I kind of picked up on the style of my father. He’s a preacher. He wore custom suits, but he never overdid it, and was always well put together. Nothing very flamboyant.”

Newton, who is already a spokesman for Under Armour Inc., said he reached out to Belk on the project. “It’s a dream come true. This collection is going down a whole different avenue for me,” the quarterback said. “I wouldn’t put my name on something I don’t believe in. This is a natural fit. The collection has an authentic approach….I’m happy to bring my vision to a clothing line that provides comfortable, on-trend clothing to men and that reflects my personal style.

“Belk is all around the region I was born in, Atlanta. It’s like in every mall. I am very familiar with Belk. I remember many times shopping with my mom at Belk. I was just an average kid so I kind of liked it more when they went shopping for me.”

Unfortunately, the Panthers dropped to a 1-4 record on Sunday by losing to the Seattle Seahawks. “You got to take it only one game at a time and take any opportunity as a team to get better and execute on all cylinders. That’s what we’ve got to do,” Newton said.

Charlotte, N.C., is the hometown for the Panthers and the headquarters for Belk.