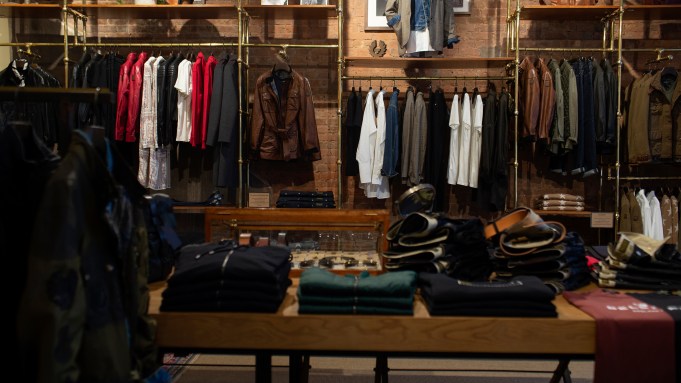 Belstaff, the British luxury brand, has returned to New York City with a new 2,000-square-foot store at 62 Gansevoort Street featuring a workshop concept and a focus on makers and creators within the local community.

Having exited its Madison Avenue store in early 2019, Belstaff sees the Meatpacking District as a better fit for the brand, which has broadened its prices and merchandise. This is Belstaff’s only store in the U.S., where the company operates both a wholesale and e-commerce business. The Manhattan store, which officially opens today, will be the company’s 11th unit globally.

“This is a really great moment for Belstaff. It’s been a long time in the planning. It’s wonderful to bring a new store on the stage,” said Helen Wright, chief executive officer of the London-based brand.

While Wright acknowledged that its Madison Avenue store “was a great store, and we spent very good years in that location,” she said, “As we’ve done in London and Germany and many other cities, we have gently re-centered this brand. We’ve relocated our key stores in London, in Munich and in New York. These are the kind of stores that tell our story as we see it.”

To Belstaff, the Meatpacking District “feels really grounded and connected, and we feel like we’re in an area of  like-minded makers and creators,” said Wright. “We feel there’s a bond between us because of our heritage and our roots and the focus on innovation and creativity. It just felt like home for us, this part of town.”

The store is located next door to Pastis, and near such retailers as Frame, Hermes, Loro Piana, Restoration Hardware and Brunello Cucinelli.

As for opening at this difficult time for retail due to the pandemic, Wright said, “There was no question of not doing it. We do think it’s the right time. We’re seeing good signs of positivity from the neighborhood itself. Like many neighborhoods around the world, Gansevoort is now a pedestrian street, it’s gotten a much more lively atmosphere in recent weeks, there’s positive energy developing. The Whitney is reopening on the third of September. Chelsea Market’s reopened, the Standard is opening on the first of September. Despite the difficulties, we think it’s a fantastic time to go ahead.”

Still, she recognizes a need to be realistic.

“We believe this will present its challenges. It will be a long process to return to a full revival of every city and every business in every center, and we are prepared for that. We believe in being there, reengaging with our community and we have such an incredible opportunity in North America  to grow the business,” she said.

Sean Lehnhardt-Moore, creative director of Belstaff, said, “I feel that there is an incredibly powerful story to be told about Belstaff as a brand, its rich heritage and diverse culture is exciting to share in every new store location we open. For our new Meatpacking District store, I wanted to combine this with a focus on local lifestyle and history. New York City has such a varied and dynamic customer base that by really exploring our collections and having a freedom to curate our product to not only meet this, but also challenge any expectations has been a very liberating experience. Having a unique assortment hopefully contributes to a customer discovering their own take on Belstaff style, whilst also enjoying the experience of our ‘community first’ store.”

Wright said the store will open with all the safety precautions in place.

Belstaff was founded in 1924 as a canvas supplier to the military. Amelia Earhart wore the brand’s aviator suits and Che Guevara took his reliable Trialmaster jacket along on his eight-month motorcycle trip across South America. During World War II, Belstaff supplied the British forces with parachutes and aviator gear, and Steve McQueen, outfitted by Belstaff, appeared in 1963’s “The Great Escape” and makes the film’s famous motorcycle jump over barbed wire (although the feat was actually performed by McQueen’s friend, stuntman Bud Ekins.)

Central to the new store is a  concept called The Workshop, a 300-square-foot space that offers customers the opportunity to restore, repair and renew their existing or just bought pieces. Local craftspeople will perform restorations and repairs live in store, and they will modify existing Belstaff outerwear to give pieces a new lease on life. In addition, customers will be able to design their own jacket using a new “Build Your Own’ service. Belstaff’s Trialmaster, which was introduced in 1948, can be personalized with a host of customization options, from fabric and patches to specialist laser and chain stitch embellishments.

“It will be a fully animated, all the time, a living, breathing workshop that can do repairs, customization and personalization,” said Wright. She said she has a network of friends in the city who helped them find all these craftspeople “who could bring the workshop concept to life.”

The Workshop will host a variety of community events with the local and global makers and creators, from denim master classes to letter press printing. The first in the series will be a workshop hosted by “Man vs. Ink,” the Belstaff maker Fred DiMeglio, a designer and screen printer, where customers will be invited to create their own bandanas in the store. Sessions will be streamed and shared on Belstaff’s social channels. Belstaff is also partnering with other local artisans and craftsmen and women such as Jimmy DiResta, Glenn Wolk, Aly Reinert and Christine Rucci, who have customized a selection of exclusive, upcycled vintage jackets that will be on sale in the store.

Another distinction of the store is a selection of exclusive products, including screen-printed bandanas, vintage Belstaff waxed cotton jackets, an assortment of vintage denim and military bags sourced within the U.S. by Rucci and a limited-edition T-shirt with a vintage graphic that speaks about the address of the store. There’s also a hand-drawn map of the Meatpacking District. The exclusive offering is available in addition to the brand’s Icons range (Trialmaster, Fieldmaster and Panther) and the fall collection.

Wright said the store is targeted to men and women from their 20s up. “Our customers are adventurous men and women who push the limits in their own way. It [the brand] appeals to people with a strong sense of purpose, and has a cross-generational appeal,” said Wright.

Over the past few years, Belstaff has made the product more accessible.

“We haven’t changed the positioning. Our quality and commitment to find products has not changed, but we really wanted to open the door wider, which means being more determined in the sourcing and supply chain, and adding new product which has opened up the brand, such as accessories and great baseball caps. What we like to do is present a brand that’s accessible and approachable to all, which has a clear sense of itself and purpose in the world,” said Wright.

Brinkworth Design worked with Belstaff to create the store, taking into consideration the industrial heritage of the neighborhood. Hammerite green steel, blackened steel, reeded glass and gold or brass details with industrial fishes are featured throughout. Glass and timber cabinets sit alongside an antique double-bow cabinet filled with vintage motorcycle props and customized helmets. Persian carpets and vintage military canvas armchairs are part of the decor, creating a relaxed environment.

“We wanted to play up our industrial heritage in some way. We challenged them [Brinkworth] on how to bring those elements in that look great. We’re not building a museum, we’re building something that needs to be friendly and workable, and people can have a great rummage in. What Belstaff has done is then spice it up with our found objects, some fantastic images on the wall of men and women who have been heroes and heroines in the past,” said Wright. The wall displays photos of Earhart, McQueen, Guevara and Sammy Miller, a motorcycle legend.

Wright said the average price point is $320. In the women’s area, she anticipates bestsellers will be the Belstaff leather jacket. “Leather is a place where a girl or woman can come and the product actually has real substance and great quality and legitimacy from a history standpoint. They’re also very modern pieces and they stand the test of time. They never look dated and old. And a great pair of leather jeans and fantastic knitwear. For men, we can dress from top to toe,” she said.

Direct-to-consumer is the lion’s share of the business, accounting for 65 percent of revenues in 2020. E-commerce has been growing at a fast clip, and is up more than 40 percent versus last year, Wright said. Wholesale accounts for 35 percent of the business, and the company sells such retailers as Nordstrom, Mr Porter and Ssense.

Coinciding with the store opening is the fall ad campaign, featuring  British actor James Norton. Among his projects have been roles in “Happy Valley,” Grantchester,” “War & Peace” and “McMafia.” Norton will appear on a giant billboard on 12th Avenue, as well as bus shelters and subway entrances in Manhattan throughout the fall.   The campaign was photographed by Blair Getz Mezibov with reportage images by Cat Garcia. Norton will become a new ambassador and creative collaborator for the brand.

The partnership continues into spring 2021 with the release of limited edition jackets, co-designed by Norton and Lehnhardt-Moore.

Belstaff Opens a London Store, With Gin and Tonic on the Menu