Belstaff Opens a London Store, With Gin and Tonic on the Menu

The Regent Street store is a world away from the former Bond Street flagship, and radiates a new brand energy.

LONDON — Belstaff has moved to Regent Street in time for London Fashion Week and created a cozy space with a worn-in feel, an in-house repair service and gin and tonic on the menu.

There’s merchandise there, too, including the brand’s well-known waxed jackets, the Trialmaster and the Fieldmaster, branded T-shirts, quilted waistcoats and leather pieces. But the store is really about a mood, a community, and having fun with the brand, which is rooted in outerwear, performance, motorsports and other sports, too.

Amelia Earhart wore the company’s aviator suits, Che Guevara took his trusty Trialmaster jacket along on his eight-month motorcycle trip across South America. During World War II, Belstaff supplied the British forces with parachutes and aviator gear, and even dressed the music hall star Gracie Fields when she entertained the troops.

Under its latest owners, Ineos, whose founder Sir Jim Ratcliffe is a motorsports fan, and with new management, the brand is going back to its origins as a purveyor of handsome, robust outerwear rather than trying to be a high-end luxury brand with a slick fashion offer. 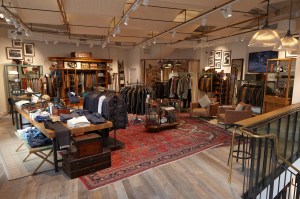 Hence Belstaff’s move from a flagship on Bond Street to a busier and more democratic shopping mecca, Regent Street, and to a “community first” retail concept with free coffee and a gin bar, weathered-looking Persian rugs and lovingly restored vintage furniture, and comfy sofas.

“Sean and I really wanted a place where we could have a good rummage around,” said Helen Wright, Belstaff’s chief executive officer during a walk-through of the store, which is located in the former Clark’s space at 203 Regent Street Wright was referring to Sean Lehnhardt-Moore, the brand’s new creative director, whose first collection has just hit the shop floor.

“It’s a gathering place now. You can come in from the street and interact with the product, find some surprises. We do customization and repairs. We re-wax jackets, and serve coffee — or gin and tonics — on the house,” she said.

Lehnhardt-Moore said he’s already learned a lot from the vintage pieces that people have been handing back for waxing or repair. “Some of them aren’t even in our archive. I love being educated by the customer and being a sustainable label. It’s a very modern mind-set. I don’t want Belstaff to be disposable — ever. I want to build things that stay around,” he said.

The retail concept was designed by Brinkworth and is meant to reflect the brand’s origins in Stoke-on-Trent, England. The 2,077-square-foot store features brass fittings, a timber staircase, antique oak floors, leather shelves and a cotton canvas canopy ceiling, reflecting Belstaff’s longtime use of waterproof fabrics. 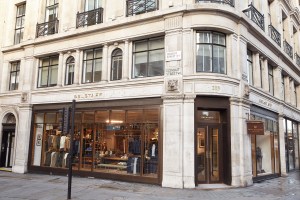 Wright, whose long career in fashion spans companies including Ralph Lauren, Bamford, Fendi, Karl Lagerfeld and Anya Hindmarch, said the store concept is part of a broader strategy to engage the end customer.

About 60 percent of the business is already direct-to-consumer with the remaining 40 percent wholesale. E-commerce is also growing, and is now about 30 percent of overall turnover, she said.

“We are seeing fantastic performance coming from our directly operated business due to the fact there is now one world for customers to engage with, one consistent world online and off-line. Wholesale is very much in the mix, and still part of the strategy,” she said.

Both Wright and Lehnhardt-Moore have been working on broadening the product and the pricing. The designer has been building up denim and knitwear to layer in with all the waxed cotton, leather and suede.

Wright, who joined the company last year, has been rejigging the pricing architecture.

“We have been very careful to ensure we create this ‘reachability’ as a brand. Belstaff is still very much a product that has incredible quality and design. But design at great value is something that is extremely relevant — and hard to find. It also makes Belstaff more attractive to a wider group of people and so it has been a big focus,” she said.

The Trialmaster jacket, which used to cost nearly 600 pounds, is now priced at 450 pounds, and Wright said the garment has the same quality, make and integrity. The company has also introduced a new entry price point, a waxed cotton jacket for 295 pounds.

Lehnhardt-Moore said any good retailer nowadays should be accessible. 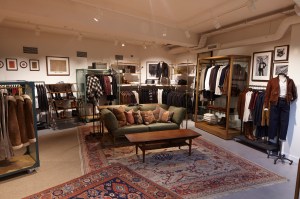 “The future of shopping is that you want it to be an enjoyable experience and sometimes you actually want to take away something. For us there are huge opportunities going forward. We want people to keep coming back to get their fix, whether it’s a cap, a belt, a T-shirt or a pair of socks.”

Belstaff isn’t stopping with the London store. Having already relocated and refurbished its Munich and Glasgow units with the new concept, the brand is planning to open a New York store on Gansevoort Street in the Meatpacking District, miles away — on many levels — from Belstaff’s former flagship on Madison Avenue.