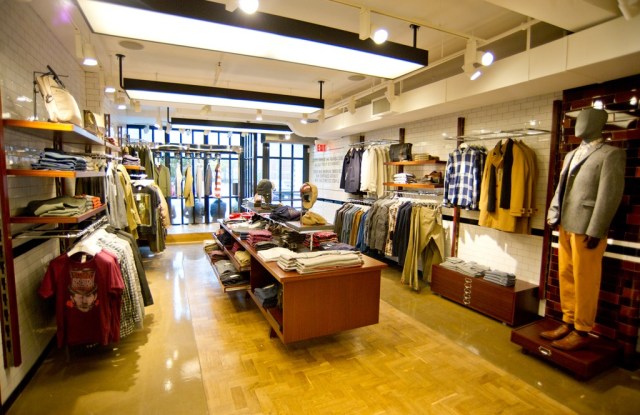 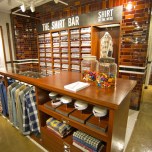 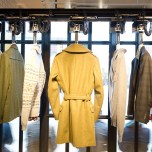 Ben Sherman has opened its first Canada store in Toronto in partnership with its distributor there, Jaytex Group. Located at 734 Queen Street West, the 2,600-square-foot store opened on Oct. 22 and incorporates the design concept and interactive technology from Ben Sherman’s recently refurbished London flagship.

Reflecting the foundation business of the brand, both the reimagined London flagship, which bowed in early September, and the Toronto store feature shirt bars as the stores’ centerpieces. The bars are staffed by specially trained employees, who wear bowler hats, whom the company has dubbed “shirtelliers.”

The new design concept showcases an attention-grabbing interactive display in the front window, featuring a carousel of seasonal goods that rotate on a mechanical track. Passersby outside the store can use a control panel to move specific items and spin them 360 degrees in order to get a good look — even when the store is closed.

The exteriors of the stores are fashioned from utilitarian brown tiles that recall an English pub, while railings inside reference council flats. “It’s a very British look but it’s more subtle than Union Jacks and red telephone boxes,” said Philippou.

The new store concept was designed by Brinkworth, a London-based retail design firm that has worked extensively with Nike, All Saints and Whistles.

Under Philippou, Ben Sherman has upgraded its products and focused on higher price points, including the recently introduced Plectrum collection and its top-end Modern Classics line, which emphasizes heritage styles.

In September, the company opened a boutique concept shop at 115 Portobello Road in London, devoted solely to the Plectrum and Modern Classics ranges. The 700-square-foot shop also carries an assortment of third-party accessories like military watch bands and magazines that complement the store’s hipster vibe.

The company now operates four full-price stores and two outlets in the U. K., five units in the U.S. and three in Germany. Additional stores are operated by local partners, including three in Singapore, two in Hong Kong, three in South Africa, eight in Australia and the new Canada unit.