Bendel’s and Samantha Chang Team Up

The strategy behind the designer-retailer union, which is being marketed as Samantha Chang Exclusives for Henri Bendel, is to offer... 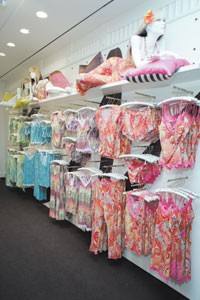 The strategy behind the designer-retailer union, which is being marketed as Samantha Chang Exclusives for Henri Bendel, is to offer Bendel customers lingerie that is “exclusive and special-looking,” said Scott Tepper, fashion director and the store’s divisional merchandise manager.

“We always knew we wanted to do something special, rather than buy off Samantha’s line. We didn’t want to offer what other stores were offering,” said Tepper, noting that a co-branding initiative this year with accessories vendors has been “extremely successful.”

“These co-branding efforts enable us to not only be faster on trends, but to create unique product that does not exist in the market,” he said. “We felt that Samantha’s aesthetic of playful femininity would appeal to our customer as she heads into summer. Also, Samantha’s sense of color and print dovetailed perfectly with the story we wanted to tell for high summer.”

Tepper said he felt so strongly about the co-branding initiative that Chang’s lingerie was showcased in Bendel’s Fifth Avenue windows alongside two ready-to-wear lines, Puka and Arch Indigo by Joie Rucker, for 12 days. The windows were set up on June 9, a day after Chang’s collection began selling in a 150-square-foot boutique area within Bendel’s fourth-floor lingerie department called La Lingerie.

“We have sold 225 units in the 10 days the collection has been on the floor, substantially above plan,” Tepper said. “The initial reaction was phenomenal, and when the windows went in midweek, we received an additional bump. Our fashion windows this season in general have had a significant impact on sales.”

Tepper added, “All four prints have basically sold equally, which we love.” Best-selling styles have been a lace-trimmed shell, 52 units sold at $78 each; 42 pieces of a cap-sleeved ruched top for $88; 48 pieces of a lace-trim cami for $68, and 32 units of a cropped mesh pant for $98, he said. Other styles include a chemise that retails at $118 and a thong for $28.

Chang, who began designing rtw in 1995 and expanded into lingerie two years ago, described the lingerie exclusives as “fun, playful and happy.” Prints are primarily bohemian-inspired in graphic florals and paisleys in bold shades of green and turquoise and multicolor patterns in vivid pink and melon. Special treatments include ruched-center effects on V-neck tops that give a “bustier look,” lattice detailing and lettuce edging. Sizes are P, S, M and L.