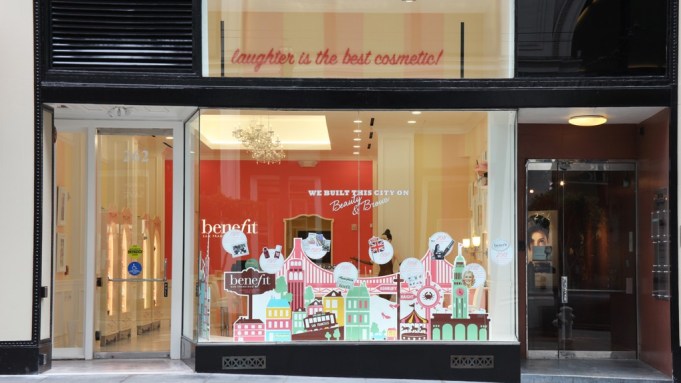 Benefit Cosmetics has headed back to where it all started.

The LVMH Moët Hennessy Louis Vuitton-owned brand on Thursday opened a 1,300-square-foot boutique at 262 Sutter Street in downtown San Francisco, some 25 years since the last time it opened a store in the West Coast city and 37 years since Benefit founders Jean and Jane Ford set up shop at The Face Place in San Francisco’s Mission District. It joins two venerable stores in San Francisco, on Fillmore Street in Pacific Heights and on Chestnut Street in the Marina.

“Our boutiques are the backbone the company has been built on. All the way back to 1976 when we had The Face Place in the Mission, we have been doing brows and welcoming people to the stores,” said Aurelian Lis, general manager, Benefit Americas. Lis added that it was a store on the opposite side of the country — a flagship in Manhattan’s SoHo neighborhood opened in 2011 — that gave Benefit the push to try San Francisco again.

The design of the San Francisco store will be familiar to regular Benefit customers. It is awash in the brand’s signature yellow and pink, it has padded stools for customers to sit on during makeup applications or brow services, and tables at its center and shelves along the walls are filled with cosmetics. There are a few special touches, though, such as chandeliers and upgraded tester units inspired by vintage jewelry boxes.

“If you look at the old photos, they actually look very similar,” said Lisa Edwards, vice president of boutiques at Benefit, talking about the history of Benefit’s retail design.

What has changed considerably is the size of the brand, which industry sources estimate is on track to grow roughly 30 percent this year to generate $900 million in global retail sales, with North America responsible for a third of the total. Those same sources forecast first-year revenues at the San Francisco store on Sutter Street to be $1.95 million. Benefit has 60 boutiques worldwide, including 22 in the U.S., and is sold in 3,500 doors globally, including 1,650 in the Americas, 1,500 in Europe and 350 in Asia.

As it returns to its roots in San Francisco, Benefit is also branching out. Lis said the brand plans to double its number of boutiques within the next two to three years. Later this year, Benefit will open U.S. stores in La Jolla, Calif., and Princeton, N.J., and international stores in London, Dublin, Hong Kong and Paris.

Sales at the Benefit boutiques are two-thirds from products and one-third from services such as brow waxing. An October launch is $19 Hydra-Smooth Lip Color, which comes in 10 shades and three levels of coverage: sheer, medium and medium-full.