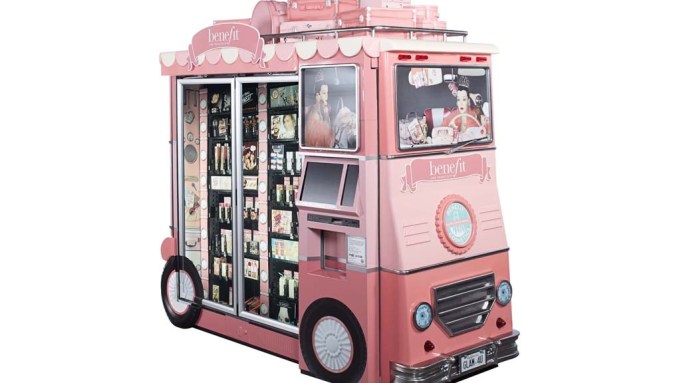 “Airports used to be these doom-and-gloom places — now I view them as the new shopping mall,” said Julie Bell, executive vice president of global marketing for Benefit. “Once the TSA [Transportation Security Administration] changed the rules, people started having to arrive at the airport much earlier, and they’re looking for ways to shop and have fun.”

Benefit teamed with ZoomSystems — a leading automated retail company that has devised similar systems for companies such as electronics retailer Best Buy, and which provides the technology and infrastructure — to implement the self-service kiosks, which resemble vintage pink beauty buses. In true Benefit style, the kiosks also feature images of the company’s mannequins and cheeky slogans. Travelers can also browse beauty tips and tricks on the kiosk’s touchscreen graphic user interface. “This is a small-format store that delivers product and delivers a brand message in real-time in great, high-traffic locations,” said Jack Lawrence, president and chief executive officer of ZoomSystems, calling the kiosks a hybrid of boutique and online shopping — while the product is delivered in real time, the user can also have a net-type experience with the digital interface.

Shannon Clemence, vice president of global creative services for Benefit, noted that food trucks were the primary inspiration for the kiosks. “Rather than a storefront, we wanted our kiosks to have the movement of going somewhere, and it evolved from there,” said Clemence. “It’s like a big pink beacon in the airport.”

The primary goal of the kiosk project is to “explode our DNA and raise brand awareness,” said Bell. “We’re viewing this as a test, and hoping to expand it domestically and internationally starting in 2014,” said Bell. Benefit’s global business is split equally between the Americas, Asia and Europe, she noted.

For her part, Bell thinks lip glosses will be hot sellers in the kiosks. “In department stores the color assortment can be overwhelming; here it’s easier to make a decision because the assortment is more limited,” said Bell.

Executives declined comment on projected sales, but industry sources estimated the kiosks could do between $3 million and $5 million in retail sales in their first year of operation.