Biagio Chiarolanza on Tuesday unveiled the new concept at the 16,200-square-foot United Colors of Benetton store in Milan’s Piazza Duomo. 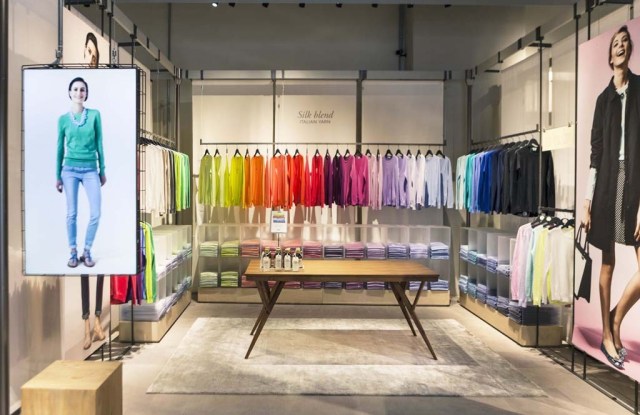 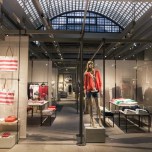 MILAN — Benetton Group closed a year of transition with a 10 percent drop in sales, which actually was a pivotal part of establishing the foundation for future growth.

Chief executive officer Biagio Chiarolanza on Tuesday presented the first steps in the changes ahead with the official unveiling of the new United Colors of Benetton concept store at the historical and central unit in Milan’s Piazza Duomo, overlooking the Gothic cathedral. “This concept we called ‘On Canvas’ is fundamental; it was developed in-house and it’s like a theater [stage] for the brand,” said Chiarolanza, noting that Benetton will now start to increase its focus on the women’s category.

The flagship offers expanded apparel collections, as well as a new comprehensive range of footwear and handbags; gift ideas, from watches, vintage telephones and headphones to mugs and candles, and the introduction of new categories such as costume jewelry, and, visually, a “color room.”

In a walk-through of the 16,200-square-foot store, new creative director Valentina Soster acknowledged that the women’s collections “had been suffering — we had a Ferrari, it just needed to be driven.” The restyling, she said, follows the identification of the brand’s customer, “a normal woman who works, is busy, dynamic, has different passions and interests, is informed, and knows about fashion and technology. These pieces are meant to solve these women’s days — and evenings.”

Although all ages are taken into account, the main focus is on women 25 to 35. The collections are displayed by theme, ranging from urban to sophisticated, in airy and flexible structures hinging on rosy colored metal poles and canvas curtains that can be rearranged depending on the need.

Soster said the store “sold thrice as much compared with last year,” and pointed to a best-selling item, a printed cotton shirt available in 10 different patterns retailing at less than 20 euros, or $27.60 at current exchange. The store sold 520 units of the shirt in two-and-a-half days, following its unofficial opening on April 4.

The executive was upbeat about the first quarter of 2014, which showed “traffic was up 10 percent, even without this new concept.” The company has seen 17 percent growth with the spring collection in its 131 most representative stores, “and if these work, we know the path is the right one,” said Chiarolanza. Debt last year was halved to “below 300 million euros,” or $396 million, improved by the sale of a number of real estate assets, and “if 2014 continues like this, there will be another reduction in our debt and we will be able to generate cash to invest in the renewal of our stores,” he remarked.

Europe is “working well,” added Chiarolanza, noting that Benetton is focusing on the Italian and other European markets, “without neglecting India, Korea and Mexico.”

The company’s new strategy is to focus on the United Colors of Benetton label and the bridge, more-fashion oriented Sisley brand, divesting the Playlife and Killer Loop monikers. Chairman Alessandro Benetton, who has been instrumental in setting in motion all the changes, is said to be increasingly stepping back from his role — sources speculate even as early as May 19, when a board meeting is to take place. In December, Benetton underscored to WWD that it was “evident that I have done a big part of my job. I have put in motion a change to have a management independent of the family.”

Starting Jan. 1, the group will effectively be differentiated in three new areas — managing brands, manufacturing and real estate. All three entities are directly controlled by Edizione Srl, the holding company of the Benetton family. This step, revealed in November, is part of a three-year plan to restructure Benetton operations with a focus on its brands in an effort to improve profitability.

On Tuesday, Marco Picone, director of the United Colors of Benetton business unit, said the company is newly engaged with its customers. “We had left the relationship with consumers to our commercial partners, but now they are once again at the center of our strategy,” he said, adding that the company has been working on shorter time-to-market, moving from a sell-in to a sell-out model. “Our competitors are either about fashion or function, but we are about both. And we are the most authoritative to represent Italy in the world through our Italian essence.”

Also, for the first time in Italy, United Colors of Benetton is bringing e-commerce into the store, using a combination of tablets and vertical monitors for an easier and more accessible customer experience. The mini iPads in the store contain a dedicated app that is connected to the brand’s online store and this interacts with the monitors, allowing staff to help customers select the clothes they want. The 16 screens, which show the collections in short videos, are also a tool for shoppers, who can buy a product even if it is not in the store.