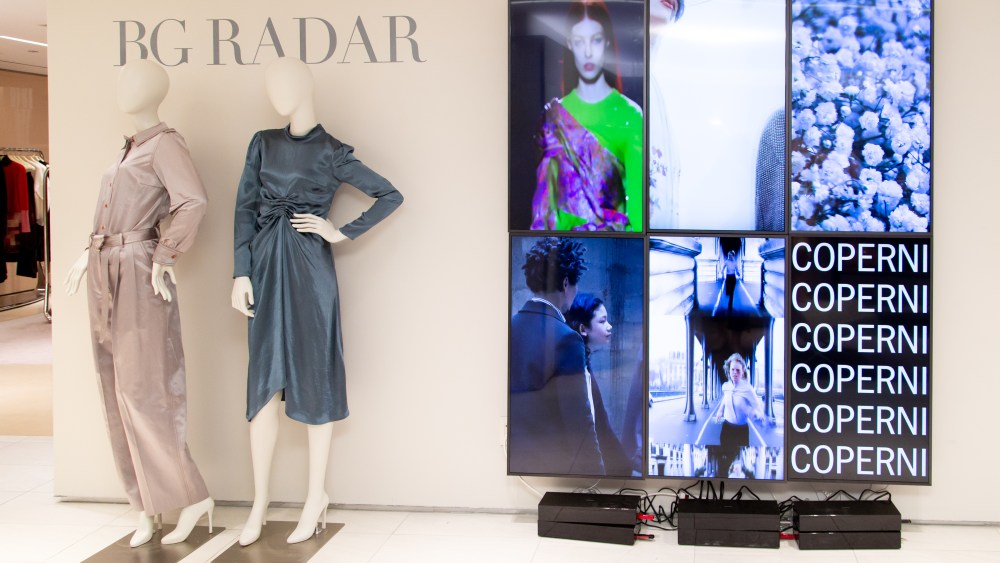 At Bergdorf Goodman, there’s a pianist on the main floor, and sheep (not real) and a rising thicket on level six.

BG Radar features what Bergdorf’s buyers characterize as “next-generation designers with innovative and distinct points of view” and also spotlights the Bernadette, Bode, Coperni, Rotate Birger Christensen and Sies Marjan labels. The eight brands are being sold to Bergdorf’s on either an exclusive or very limited distribution basis.

Displayed on Bergdorf’s sixth floor in “personalized and interactive settings,” the assortment gives the luxury emporium an unusual pop of modernity and color, and a touch of playfulness for fall. The brands worked alongside Bergdorf’s visual team to create installations that incorporate mixed media and serve as nods to their fall 2019 runway shows, look books and campaign imagery.

For Khaite, for example, there’s a re-creation of creative director Cate Holstein’s dramatic autumnal elements seen at her show last February. And for Sies Marjan, there’s a platform mimicking the millions of crystals displayed on creative director’s Sander Lak’s runway.

“We’re trying to tell their story in a way that’s true to them and true to us,” Darcy Penick, Bergdorf’s president, told WWD. “BG Radar is the brainchild of Yumi and Linda,” Penick added, referring to Yumi Shin, chief merchant, and Linda Fargo, senior vice president, women’s fashion director and store presentation.

In a concise review of the BG Radar lineup, Shin singled out Sies Marjan’s Lak as “a master” of mixing colors; Khaite’s collection as “very feminine with ruffle details and lots of knitwear,” and Bode’s utilitarian version of workwear with feminine embroidery.
Deveaux, said Shin, offers classic wardrobe pieces with a twist; Coperni offers “architectural” tailoring with twists; LouLou Studio has a fine cashmere and wool-based collection; Bernadette’s sophisticated look is inspired by paintings, and Rotate has Eighties-inspired party dresses.

BG Radar is finalizing its lineup for spring and plans to add up-and-coming brands each season. Moreover, it’s not limited to women’s, as Bode is available in men’s and women’s. As Penick said, “We’re finding an incredible amount of emerging talent.”