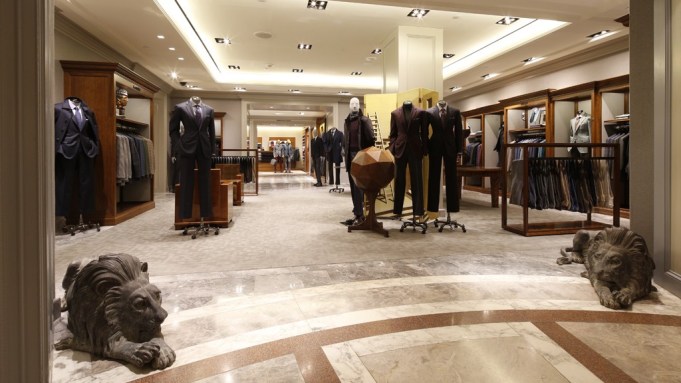 NEW YORK — Bergdorf Goodman has the only freestanding men’s luxury store in Manhattan, and it’s ready to crow about it.

For the past two years, the upscale retailer has been investing in the remodeling of the three-floor, 41,500-square-foot Bergdorf Goodman Men, the first comprehensive revamp since the store opened in 1990. Last September, the third-floor contemporary designer department got a facelift and a shoe library was created on the main floor. This fall, it’s the front of the main floor and the tailored clothing department that got a dose of love.

“Admittedly, when the men’s store opened in 1990, it was to free up space for the more-productive women’s merchandise,” said Joshua Schulman, president. “But over its 23-year history, it has developed a distinct identity as a stand-alone business with a heritage of innovation. From Tom Ford to Thom Browne, Bergdorf Goodman Men was the first store to introduce designers like that. The very talented merchant team at that time developed small businesses like Brunello Cucinelli, that at the time was only a sweater resource, and they grew alongside Bergdorf Goodman Men.”

He said that most of the store’s competitors have moved to “homogenize” their men’s departments “to a more unisex concept. But we see having a separate and distinct location as an advantage.”

Barneys New York, Bergdorf’s key rival in the luxury arena in New York City, has also been investing in updating its men’s store, but has been breaking down the barriers and walls between its adjacent women’s store.

When Schulman joined Bergdorf’s two years ago, he brainstormed with the team “on what the next generation of men’s store should be. We have some of the most powerful retail real estate in the world, on Fifth Avenue between Apple and Louis Vuitton. So we looked at the mix of product and worked to keep the extraordinary taste level that has defined Bergdorf Goodman but make it more relevant to a younger customer.”

The challenge, he said, was to “harness the power of our sartorial heritage and blend it to meet the changing needs of today’s modern consumer.”

Schulman declined to provide a dollar figure for the cost of the renovation but noted, “There’s a lot of growth within these four walls. We have a very powerful stand-alone business and, by investing in capital, people and marketing, we have a significant opportunity.”

In the latest phase of the renovation, walls have been eliminated to open up sight lines and the Bergdorf visual team, headed by Linda Fargo, senior vice president of the fashion office and store presentation, has pored over every detail. “We embraced our heritage in design and layered on modernistic touches,” she said. “We like the store to look ‘collected,’ so it’s more personal. It has to be warm and somewhat residential and combine historical references.”

Right inside the main entrance, the store has created a multibrand men’s sportswear presentation. Over the years, the area has been “an incubator for a new way of dressing,” Schulman said. Among the brands featured here now are Moncler, Cantarelli, Boglioli, Stone Island, Seraphin, John Smedley and Cruciani.

In January, the first Goyard men’s accessories shop outside Paris will open at the rear of this area. “They’ve been a very special partner of ours for many years,” he said.

On the left of the Fifth Avenue entrance is a new one-of-a-kind Cucinelli shop. “This is one of the most prominent and signature businesses for Bergdorf Goodman,” Schulman said. Fargo said the shop, which was created in partnership with the Cucinelli team, features cerused oak and sisal flooring to create “a very rich, warm, tactile experience.” The shop is located next to Loro Piana’s boutique, which was completed last year. “We love the synergy of the two,” Schulman said.

Outside the Cucinelli boutique is a comprehensive sunglasses presentation, which Schulman said was an “area of growth” for the store. In the past, the glasses were kept in cases, but now, most are showcased in “glowing wall” cabinets that are accessible to consumers. Next to that is an expanded cold weather assortment with scarves, gloves and other items merchandised in an open-sell environment. A Vilebrequin boutique is also featured here.

On the right side is an area devoted to leather goods. “That’s one of our biggest focuses,” Schulman said. “There was just not a sufficient presentation before. And it speaks to the way men are dressing now, with all their devices.” The assortment includes everything from iPad cases to traditional briefcases to duffels. Among the brands offered are Tom Ford and Santiago Gonzalez, which are exclusive, as well as Bottega Veneta, Prada and Tod’s. Berluti will be added for spring. (Schulman said the brand’s ready-to-wear will have a shop on two and its shoes will also get a shop on the main floor.)

Next to the leather goods is a men’s fragrance and skin-care department. Anchored by Tom Ford, and inclusive of both “artisanal and tried-and-true favorites, it has a very prominent location near the door on Fifth Avenue,” Schulman said.

Moving toward the rear of the main floor, a new Charvet shop has been created, complete with a distinct made-to-measure area and expanded offerings of socks, knit belts, slippers and other pieces. Originally in the front of the store, it is now next to the furnishings area, which will get a facelift of its own next year. “We’ve corrected a lot of quirky adjacencies,” Schulman said.

On the second floor, Bergdorf has created a “new world for men’s tailored.” It is anchored by new shops for Brioni and Ermenegildo Zegna that were created by the store in partnership with the brands. Zegna’s shop overlooks Fifth Avenue and windows to the outside have been uncovered. “This allows us to have the dominant presentation of Zegna in the city,” Schulman said of the shop, which is patterned after the brand’s Peter Marino-designed stores.

There is also a room dedicated to Neopolitan brands such as Kiton and its younger sibling, Ciba, as well as Attolini, a new exclusive for the store. Other brands include Isaia, Belvest and Castangia and Miller’s Oath, the latter two being exclusive.

There’s also a special room devoted to formalwear, which Fargo said was designed to be a little more “glamorous,” with its mix of vintage and Art Deco touches. “There’s more gleam in this space,” she said.

The store will eventually carve out a special made-to-measure area here, a category that Schulman said is “a very important business for us. We want to give it its own unique home.”

Finally, tucked away in the back is a completely rebuilt personal shopping and fitting room complex, complete with a VIP area. Schulman said the company’s customers are accustomed to spending time in five-star hotels and this area was designed to be up to those standards. There is a tailor on premises for immediate work and the fitting rooms feature leather furniture, upholstered walls and carpeting.

Schulman said the next phase of the renovation will be the center of the second floor, with new homes for Berluti and Ralph Lauren. The Ralph Lauren shop will be a one-of-a-kind and will feature a mix of Purple and Black label as well as some product exclusive to Bergdorf’s.

The final phase will include the addition of a bar in the center of the rotunda on the second floor that was designed by architect David Collins, who died this summer. “We had had a café on the third floor that was deeply missed by our customers,” Schulman said.

To get its message out to customers, Bergdorf for fall created a campaign centered around “authentic New York tastemakers with great personal style,” Schulman said. These men, including gallery owner Bryce Wolkowitz and entrepreneur Lex Kendall, are being touted as the Goodman Men. “We want men to say they’re going to Goodman’s the way women will say they’re going to Bergdorf’s,” Schulman said.

Ads are running in New York City taxis, on a SoHo billboard for the first time, on subway panels and in print ads in publications such as The New York Times, Departures and The New Yorker.

“We really want to build awareness of the store,” Schulman said. “We think men’s is the best-kept secret at Bergdorf Goodman.”