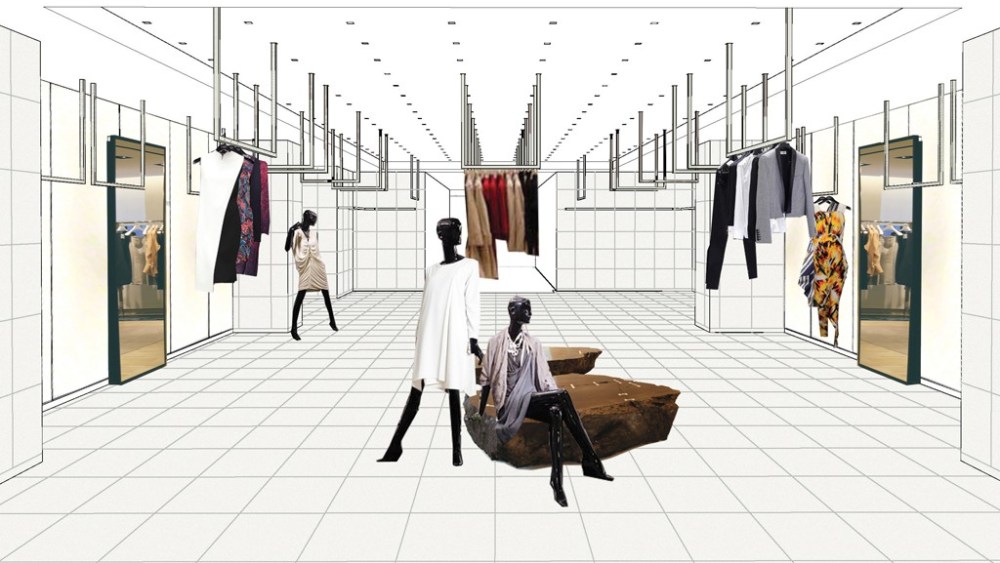 NEW YORK — On level six of Bergdorf Goodman, Joshua Schulman takes in the rawness of a floor stripped of its merchandise and luxury trappings.

“This is the first complete gut renovation we’ve done in decades. You can see right down to the studs,” said Schulman, the president of Bergdorf Goodman. Aside from the Central Park view, there’s not much to see, but he’s liking the unvarnished space for what it suggests is ahead for much of the store: renewal.

Bergdorf Goodman, a division of the Neiman Marcus Group, has a five-year plan, called BG 20/20, to renovate and update its women’s store and evolve bergdorfgoodman.com. Coming up: “Modernist Collections” on six with The Row as the anchor; the “Lab” to spotlight emerging designers, also on six, and a reconfigured main floor to firmly delineate fine jewelry from leather goods and accessories. Jewelry becomes “a store within a store” on the 57th Street side, and “a grand hall” for leather goods will emerge off the Fifth Avenue entrance and flow into designer salons extending back and north to the 58th Street entrance.

Behind the scenes, the merchandising of bergdorfgoodman.com is being transferred from Neiman Marcus Direct buyers, based in Dallas, to Bergdorf’s store buyers in New York. Those covering fine apparel, handbags and shoes are now merchandising the Web site, and effective for pre-fall, 70 percent of the Web site’s merchandise will be bought by the store’s buyers.

Bergdorf’s has been aggressive in social media and special events, yet there’s catching up to do with business online. The Web site, launched in 2004, began international shipping to 150 countries last November through Borderfree, which helps companies price in different currencies, with payment processing and other aspects of international shipping. “We have a very strong international following, but we purposely held back until we [started] the realignment,” said Schulman, who wears a second hat as president of NMG International, including overseeing the Munich-based Mytheresa.com division acquired last year.

For NMG overall, online sales account for 24 percent of total sales, but bergdorfgoodman.com is “underpenetrated to the group,” Schulman acknowledged. “We see bergdorfgoodman.com as an important opportunity. In today’s world, it’s important to have synchronicity between online and offline.” With apparel brands like Akris and Loro Piana, in-depth merchandising and shop build-outs have established BG’s brick and mortar as a dominant luxury player. But online, “we haven’t had that full breadth,” Schulman said. “It’s an area we can really distinguish Bergdorf Goodman from a lot of other Web sites out there.”

Bergdorf is already renowned for its high productivity. With BG 20/20, the objective is to raise it further by making shopping easier, focusing on the most important designers, modernizing the environment without diminishing from the classic Beaux Arts elegance, and staying one step ahead of the competition in a city where retail development is on steroids. Saks Fifth Avenue has a $250 million plan to overhaul its flagship and is grappling with the complexities of rethinking the footprint. Nordstrom will open at 225 West 57th Street, between Broadway and Seventh Avenue, in 2018, and is eyeing downtown for a second full-line Manhattan store. And Neiman Marcus in 2018 will open in Hudson Yards, under development on Manhattan’s far-west side.

It’s not that Bergdorf Goodman is broken. The goal is to make a good thing better in a market that continues to attract luxury flagships. While Bergdorf’s has virtually no room left to grow square footage, the space can be put to better use, at least as Bergdorf’s executives see it. They declined to discuss volume, but sources said the goal is to eventually crack $1 billion in annual sales from last year’s approximate $750 million in sales. The Bergdorf Goodman business comprises the 150,000-square-foot women’s store, bergdorfgoodman.com and the 41,000-square-foot men’s store across the avenue, which completed a renovation last year.

On the women’s side, there have been several changes already since Schulman became president nearly three years ago, like new handbag shops for Prada, Tom Ford, Dior and Chanel, and in ready-to-wear, new shops for Céline, Saint Laurent, Alexander McQueen, Valentino, Stella McCartney and Proenza Schouler. The main and sixth floors present somewhat disjointed shopping experiences for the affluent, demanding clientele. Bergdorf’s was originally built as a series of townhouses, carved up and let to various vendors, making the navigation choppy. More walls will come down, though executives say the special Bergdorf DNA — it’s sense of discovery from floor to floor as to what’s around the corner — won’t go away. “This is a five-year plan, altering a substantial amount of the store. We will keep the historic architecture and the classical bones but really modernize the shopping experience,” Schulman said.

“You have to balance traditional and classical elements with things that are modern and still keep it warm,” said Linda Fargo, senior vice president of the fashion office and store presentation. “We never see ourselves as a ‘cool’ store.”

Modernist Collections, representing phase one of the sixth-floor renovation, opens in April, as Bergdorf’s reimagines an environment that’s lacked visibility and cohesion. “Six represented the best of 1980s store design,” Schulman said. He wants it gone. “From a design point of view, six will be one of our most-modern floors,” Fargo added.

The Row will double its square footage in Modernist, in a penthouselike setting designed by the Kramer Design Group and decorated by the Olsen twins with vintage furniture. “They have an incredible eye,” Fargo said. “We asked them to treat this as if it were their own apartment.” She said that the line, which the store started carrying six years ago, is now “one of our largest designer sportswear businesses.”

Another of Bergdorf’s Modernists, Brunello Cucinelli, “started with some V-necks in the men’s store. Now it’s become one of our most-important businesses for men’s and women’s,” Schulman observed. Others set for the Modernists area are Moncler, Derek Lam, Narciso Rodriguez, Max Mara, Lela Rose and Donna Karan. Included will be a fitting room that Schulman said will be as large as his first Manhattan apartment. He would not discuss any square footage.

The Lab will have hanging bars suspended from the ceiling to display merchandise from such designers as Cedric Charlier, Preen, Zero + Maria Cornejo, Tomas Maier, Baja East, Co and Adam Lippes. “They are brands to be nurtured,” Schulman said. “We’re making a commitment to them and it’s over time. This is not a rotating pop-up shop.” Sportswear will be the core of the assortment, though knitwear and dress resources could be included, he explained.

Also coming to six, new intimate apparel and coat areas, as Bergdorf attempts to “align our families of business in a more holistic way,” Schulman said.

On the main floor, Bergdorf’s will embark on its most-significant renovation since beauty was relocated to the basement in 1999. “You might call it a renewal. It’s not quite a gut renovation,” Fargo said, noting that the idea is to preserve historic elements and architectural details such as the moldings and chandeliers. “We don’t envision it as a plain white box or a simple street of shops that you see in Galeries Lafayette or Isetan.”

“It’s been a very disjointed shopping experience,” Schulman admitted. “Customers would come into the 57th Street side of the store and they’d think that’s all there is with leather goods, but we’ve had leather goods on all sides.”

Opening next fall will be a jewelry complex, or “store-within-a-store,” supported by the 57th Street windows devoted entirely to the category instead of ready-to-wear, and a private viewing room that Bergdorf’s lacked before. For those most-precious jewelry transactions, staff had to ferry customers upstairs to any executive office that wasn’t occupied at the time. “We are going to treat the 57th Street side as another front door for Bergdorf Goodman,” Schulman said. Refining that section of the store into an area that’s unabashedly jewelry, with Verdura, Lorraine Schwartz, G International, David Webb and Solange Azagury Partridge, among the lines carried exclusively by Bergdorf’s, makes sense given what’s just outside on the corners of 57th Street and Fifth Avenue — Bulgari, Tiffany and Van Cleef & Arpels.

Right off the Fifth Avenue entrance, there will be a grand hall for leather goods surrounded by salons for leather goods and accessories including Dior, Chanel, Tom Ford, Nancy Gonzalez, Céline, Valentino and Goyard.

“Nothing is wrong with the main floor. It is beautiful,” said Schulman. “But we’re improving sight lines, taking advantage of more vertical merchandising, and we see a mix of a classic service model with elements of open-sell, instead of what’s been a traditional associate-behind-the-glass-counter format. It will allow us to show our existing brands better and really have product authority in important jewelry and leather goods businesses and introduce a few new brands to the mix.

“By fall 2016, you will see a completely new and refreshed main floor experience,” he said.