For its 111th anniversary festivities coming up, the store has several digital tie-ins planned. 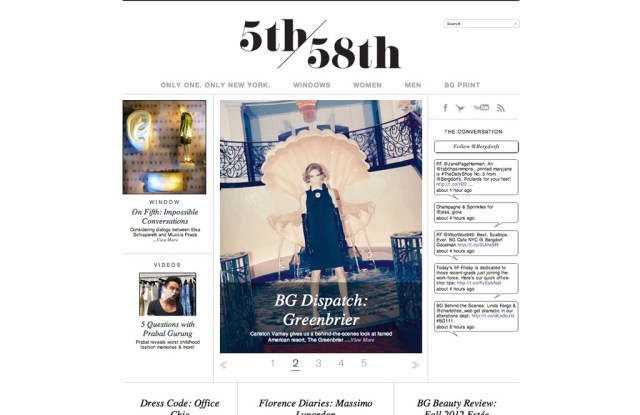 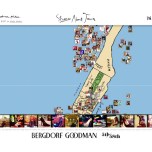 Those are the two words Bergdorf Goodman’s social-media manager Cannon Tekstar Hodge used to explain the success of the retailer’s digital and social-media strategies. Last year, Bergdorf’s took the 22nd spot in New York University think tank Luxury Lab’s second annual Digital IQ Index that ranks specialty retailers according to online competence. This number is impressive given that it has just one physical location and is held in the same esteem — digitally — as Macy’s, Victoria’s Secret or Sephora, which have hundreds of doors.

This story first appeared in the August 14, 2012 issue of WWD. Subscribe Today.

“For years, our customers’ experience with Bergdorf Goodman was through the store. With the advent of online shopping and social media, that relationship now coexists on- and off-line. Our job is to provide the unique Bergdorf Goodman experience — wherever the customer chooses to visit,” said Mallory Andrews, Bergdorf’s senior vice president of sales promotion, marketing and public relations. Of the multichannel approach the store takes, in-store and online programs are linked with content customized to each platform to create optimal conversation with fans.

“We’re really listening to our followers and creating a sense of social community so that no matter where they are, this feeling will be evoked — whether you’re in the store, online or on Facebook. We really try to be agile and flexible, and what’s important is the way the entire store is involved and active,” Tekstar Hodge said of a multiplatform versatility that’s paramount to the store’s online persona.

This has only been made possible by integrating the entire team, according to the social-media manager, who said that there could be people from seven different departments in a meeting discussing digital strategy. This interconnectedness ranges from those who oversee window presentation to p.r. and merchandising associates.

For example, when a pedestrian passes the store’s windows, there is a hashtag #BGWindows plastered on the glass — reminding passersby to include the hashtag if they wish to Instagram a photo. On Facebook, there is a tab with a feed of the images tagged #BGWindows by users who tag their Instagrams. If a customer goes to bergdorfgoodman.com and is looking at a specific beauty product, there is likely to be a link to a relevant blog post.

“Whether it’s an e-mail about 5F party dresses, there’s a link to Pinterest about 5F party dresses, or a BG Vision Focus [e-mail] about what to do in the city, with a link to a blog post about different things to do. We’re all discussing different ways to blend social into the mix. Everything is very connected,” Tekstar Hodge said of her team, which works closely with those who work on the Web site to ensure that social is fully integrated into the retailer’s digital flagship.

Social media has also served as a vehicle to enhance the retailer’s customer service. Bergdorf Goodman will use Twitter to confirm lunch reservations by a person’s handle, and once, Tekstar Hodge even used her social-media influence on the platform to expedite a shoe repair.

For its 111th anniversary festivities coming up, the store has several digital tie-ins planned. First, the more-than-two-year-old 5th/58th blog is getting a facelift. Bergdorf’s goal is to increase the user’s average engagement on the blog and implement more social buttons and ways for readers to follow guest contributors and designers featured — and allow fans to share content beyond just the “like” or e-mail button. The blog will also continue to publish its BG Stories series, urging users to submit their own stories and experiences about the retailer. The site’s landing page at bergdorfgoodman.com will be solely devoted to the 111th anniversary at the end of the month.

On Facebook, the retailer will offer a one-week exclusive preview to fans, allowing them early access to limited-edition items created exclusively for the anniversary festivities. The store’s time line — currently an archival gallery of historical images outside the restaurant on the seventh floor — is now being implemented onto its Facebook time line (and bergdorfgoodman.com), marking the first time the in-store and Facebook time lines will be integrated.

In the store’s September magazine, a behind-the-scenes short was created to mark its 111th birthday, which will be posted for viewing on YouTube, Facebook, bergdorfgoodman.com and its blog.

Asked what the most “impactful” initiatives in the space have been to date, “Shoes About Town,” “Faces of 5F” and the “Fendi Frenzy Challenge” on Facebook were cited as some of the most successful by Andrews.

To fete the opening of its renovated shoe department last August, the “Shoes About Town” project encouraged fans to Instagram photos of footwear against cityscapes or other creative backdrops. The images, which became part of an in-store installation, were featured on the 5th/58th blog via an interactive map of the city and were also hashtagged with #BGShoes and the user’s caption. The project is still live because of its “overwhelming response,” and was one of the early programs where a fashion brand used Instagram.

“Faces of 5F” was a competition in which Bergdorf Goodman shoppers were able to enter for a chance to model in the store’s fall 2011 ad campaign. The contest resulted in 17,000 new Facebook fans, 1,500 entries, and the winner appeared in an issue of Lucky Magazine and in a shoppable video.

The “Fendi Frenzy Challenge,” was a competition in which users were able to colorize and design their own Fendi 2Bag last April, with the five most voted bags sent to the Fendi design team to decide on a winning design, which was produced and sold exclusively at the store for the fall 2011 season. The challenge generated 1,240 entries and 12,000 votes.

She also cites its holiday videos from 2010 and 2011 as successful, garnering a collective 310,600 views on YouTube, as well as Polyvore challenges that can generate more than 5,500 entries.

“I was in the store [recently] and ran into two or three of the winning ‘faces’ on the floor of 5F that day. It’s important to us that these experiences we create online are something that have a permanence to them,” Tekstar Hodge said. “I follow all of our winners and everyone who has won our challenges. We still engage and interact with them and maintain that relationship, because they are now part of our history.”