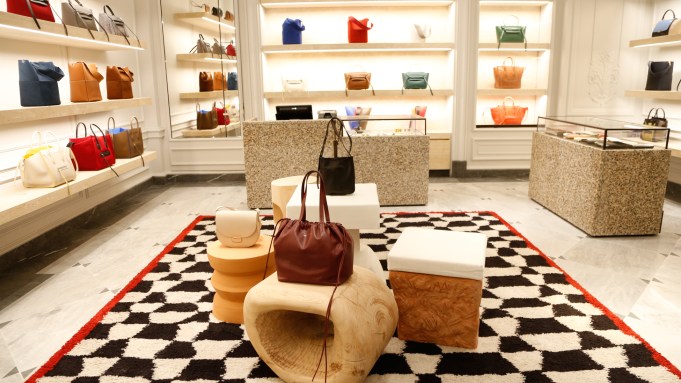 NEW YORK — At Bergdorf Goodman, the parquet wood floor has been replaced by blue Savoie marble and stone, the ivory palette has turned pearl gray and a disjointed merchandising scheme has been supplanted by a footprint firmly delineating fine jewelry from leather goods.

It was down to the wire, but on Tuesday morning, the retailer reopened the main floor of its women’s store in its completed state. As customers first entered, workers were busily merchandising the bronze artisanal case-line fixtures.

Bergdorf’s has always been among the world’s most beautiful stores, yet now there’s an even greater sense of place. Leather goods, accessories and jewelry are displayed conspicuously on walls, adding perspective to the ceiling height, and in a series of rooms and salons that reinterpret the classic Beaux Arts setting in a modern way. Rock crystal and Sixties-style Murano chandeliers are throughout the floor, and several architectural charms, such as the intricate ceiling moldings and the arched marble-framed entrance to the 58th Street rotunda room housing Tom Ford leather goods, have been restored. Also on the 58th Street side, a large 12-foot-by-12-foot window has been uncovered for a vista out to Pulitzer Fountain and Central Park.

“Our window on Central Park is the ultimate place to take a selfie. It’s a real Instagram moment,” Joshua Schulman, president of Bergdorf Goodman and NMG International, said.

As Schulman’s comment suggests, the remodeling has been about transforming one of the world’s “grande dame” department stores for 21st century shopping behavior while maintaining its historic character and posh appeal.

“It should not to be so jarring that people feel: ‘Oh my God, they tore up my favorite store,'” Schulman said, explaining the overriding objective of the project. “We made a really deliberate decision to work within and restore the historic vernacular of the architecture while modernizing the shopping experience. We absolutely did not want to strip away the grandeur of the main floor. Instead, we wanted to emphasize the architectural detail while recognizing we wanted to create a more modern, open shopping experience for today’s customer.

“When you undertake a project such as this, you ask, ‘Is this a gut renovation? Are we going modern?’ What’s the right tack to take? We felt it was more important to embrace, refine and restore some of our historical and memorable elements,” said Linda Fargo, senior vice president, fashion and store presentation director, who set the vision for the renovation and had assistance from Michael Neumann Architecture. “If you were to ask me what was the inspiration for this, I would say it’s the store itself and its history.”

The main floor renovation is the most important part of  the BG 2020 five-year plan to renovate and reinvigorate most of the retailer’s 150,000-square-foot women’s store. Bergdorf’s aims to elevate its already high productivity and capitalize further on best-selling brands and categories, including luxury leather goods, which were underplayed before. “The main floor is the really the first impression of what’s to come and probably has the most traffic,” observed Fargo.

It’s also about getting a competitive edge in a city that is seeing an influx of major retail. On Friday, Saks Fifth Avenue opens a women’s store in Brookfield Place in lower Manhattan, and both Saks and Bloomingdale’s are extensively renovating their Manhattan flagships. Coming soon, the first Neiman Marcus and Nordstrom stores in New York City. Neiman’s expects to open in Hudson Yards in 2018 and Nordstrom, on West 57th Street in 2019.

BG 2020’s first phase was completed last September when the Modernist sixth floor showcasing such brands as The Row and Moncler as well as The Lab for smaller emerging designers were unveiled. The main floor was phase two, and in a third phase, floors eight and nine will be converted from back-office operations to 25,000 square feet of selling space. The back offices are being relocated to recently-attained space at 4 West 57th Street, adjacent to the store. “We are not ready to share what will be on those floors, though I can tell you we are continuing to think of new and different types of attractions,” Schulman said of the eighth and ninth floors.

For some, Bergdorf’s main floor felt challenging to navigate and unpredictable with its presentation, although that did bring some sense of discovery. “Those of us who loved Bergdorf Goodman got quite used to it. But if you really stood back, we had adjacencies that didn’t make sense,” Schulman said. “We had leather goods in three different locations on the floor and you had jewelry, which is our highest price point, in the most public spaces on the floor. If you entered the store on 57th Street, a lot of customers would see the offer in that room and think that was the full extent of the leather goods and would not venture to 58th Street. We lost something there. We weren’t making the most effective use of the space. The main floor had not been looked at holistically really since we moved beauty to the lower level in 1999.”

Fine jewelry, which reopened last December, takes visual cues from Thirties French moderne interior designers Jacques Quinet, Andre Arbus, Jean-Michel Frank, Diego Giacometti and Serge Roche, and has become “a store within a store.” It seems understated compared to its previous incarnation, and has a degree of intimacy that was lacking before. “To shop for jewelry in a very fast-moving space is not really appropriate,” observed Fargo.

The mood is enhanced by a private showing room for clients buying very expensive pieces, and windows on 57th Street are now devoted to jewelry. There’s also a new arched marble entrance on 57th Street, replicating the original one restored on the 58th Street side, and back-lit Bergdorf Goodman lettering on the facade.

With the changes, there’s a stronger connection to the neighborhood considering the corners of Fifth Avenue and 57th Street are anchored by Tiffany, Bulgari and Van Cleef & Arpels. The setup, as Schulman said, also gives Bergdorf’s “a different gravitas in the jewelry industry to have dedicated windows and to really have a distinct personality.”

Before, leather goods and jewelry were primarily displayed in case lines, “a somewhat old-fashioned selling model,” Schulman observed, where most products were waist high, making for “a very formal selling ceremony” with sales associates behind the counter and customers bending uncomfortably to browse. The shift is to increased open-sell and self-serve areas and effective use of the wall space for display, particularly along Fifth Avenue. With the renovation, “We did pick up a significant amount of capacity in both leather goods and jewelry. They were really conceived together. We now have more flexibility and much better use of vertical merchandising.”

Added Fargo, “The square footage and linear space for leather goods allow us to be much more authoritative and forward looking.”

In addition, 30 handbag vendors including Dior, The Row, Céline, Bottega Veneta, Valentino and Givenchy provided 87 exclusive items to celebrate the new main floor. The items were previewed online in the September issue of BG Magazine.

The main floor is a succession of salons and rooms, beginning on the 58th Street side with the rotunda room housing Tom Ford, to the right, Bottega Veneta, and then another room where designer exclusives are displayed, as well as Givenchy and Proenza Schouler.

Next heading south is the Fifth Avenue “grand salon” for Azzedine Alaïa, Valentino, The Row, Fendi, Valextra and other lines. Then there’s a “Modernist accessory pavilion” housing soft accessories, sunglasses and some leather goods, and adorned by a Malcolm Hill wall relief.

Continuing south, there’s a large Céline shop and on the opposite side of the floor, Loro Piana, with a distinctive stained Koto wood design, and the separate jewelry space on the 57th Street side.

The reimagining of Bergdorf Goodman comes at a time when selling luxury is tough. The wants and needs of the luxury consumer are changing and they are spending less on fashion. However, as Bergdorf’s executives point out, it’s better to do disruptive construction work when business is soft and get the renovations done to be ready for  better selling periods.

“The way we look at this is that there are some changes that are cyclical and other changes that may be more secular,” Schulman said. “The cyclical changes are related to currency, tourism, possibly world events in different places. The luxury business and Bergdorf Goodman have been through these cyclical changes many times. I do think there are also changes that are secular, and some of those are related to how the customer is shopping and how the customer is looking at product, not only in-store, but online and shopping increasingly with their mobile. They are armed with so much more information and so many choices than ever before. How are those secular changes influencing us? We have made a lot of improvements to the web site. There is more coherence between the point for view of the web site and the point of view of the store.”

With merchandising of the site recently transferred to the store merchandising team there’s “congruency” between what the customer sees online and in the store, Schulman said.

Bergdorf’s will this fall roll out services linked to integration of bergdorfgoodman.com with the store, such as buy online, pick up in store, and same-day delivery services. “The more seamless you make the channels, the better,” Schulman said.