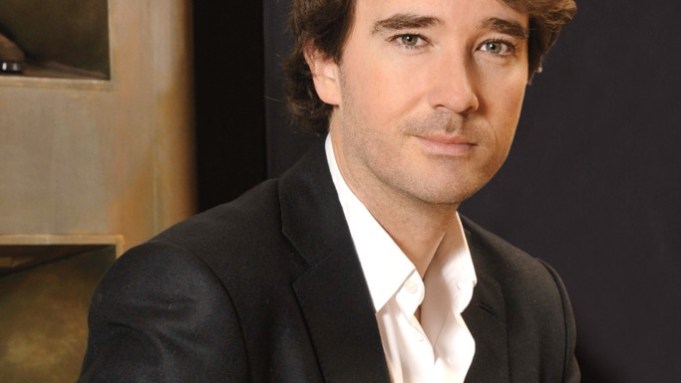 “I remember worshiping them,” Antoine Arnault recalls with fresh zeal. “I didn’t have so many occasions to wear them, but I found them so amazing. I kept them in my closet. I felt like they were glowing, almost like gold.”

Fast-forward 18 years: Arnault is now, at 34, the chief executive officer of Berluti, responsible for transforming the footwear brand into a hyper-luxurious lifestyle label for men. He’s banking on Berluti’s cultlike following—and the design prowess of handpicked artistic director Alessandro Sartori—to make it the men’s wear powerhouse at family-controlled LVMH.

“It’s a big investment for the group,” Arnault says over a lunch of shrimp and salmon tempura at Hanawa in Paris, his asparagus-thin frame swathed in black cashmere. Indeed, within three or four years Arnault plans to double the number of Berluti boutiques dotted around the globe—there are currently 35—and double the average size of existing stores to accommodate a full range of ready-to-wear, an expanded offering of accessories, and, in the not-too-distant-future, a made-to-measure service.

Arnault won’t give precise projections but flashes a signature grin as he describes his revenue targets as “very ambitious.” Not that Bernard Arnault—the richest man in France—gave his son a blank check to build the brand. When the younger Arnault proposed that the group transform its underdeveloped footwear jewel into a global men’s wear force, the “boss” told him to come back with a business plan.

Underpinning Antoine Arnault’s confidence is more than just his lingering teenage affection for those expensive birthday boots. Over the years, he’s visited countless Berluti stores, and marvels at the passion of the brand’s devotees. “Some men actually have rooms in their homes dedicated to their Berlutis,” he says. “Our customers are art collectors, vintage-car collectors, cigar aficionados. They’re aesthetes. They love beautiful things.”

Arnault says the company’s customers spend an average of 45 minutes in Berluti stores, soaking up the “clubby” atmosphere and relishing the personal attention (which makes sense—a pair of “off-the-rack” Berluti’s retails from 1,000 euros to 1,200 euros, or $1,300 to $1,500 at current exchange rates, while a typical bespoke pair sells for over 4,000 euros, or $5,400).

Extending Berluti’s shoe heritage into other product ranges, Arnault says, presents “a fusion between extreme quality and style,” something he feels does not exist in the market. While typically dressed in sleek black suits and crisp white shirts, the energetic and upbeat young executive, previously communications director at Louis Vuitton, likes clothes, shops the competition and sometimes buys from rival brands.

“I’m a perfect target customer for men’s luxury goods,” he says. “And I must say, there are some incredible brands around. But none of them have the level of quality, style and service I want Berluti customers to have.”

The company has already tested its well-heeled customers’ appetite for apparel. Last November, Berluti shipped a teaser collection to select stores, including sweaters trimmed with leather and dressy jeans. Arnault reports an “excellent” response. “We’re out of leather jackets. We’re out of jeans,” he says merrily. “We do very well in scarves.”

The fall rtw collection is set to arrive in select Berluti stores in June, with a directly operated unit in Harrods in London hinting at the company’s new lifestyle-store concept. A flagship unit at the IFC Mall in Shanghai, slated to open toward the end of the year, will express the new look to the fullest.

Arnault tapped the same architect his father used to create the first Paris boutique for Moynat, a 19th-century trunk-maker in the early stages of revival. He is Gwenael Nicolas, a French national based in Tokyo, known for giving sumptuous heritage materials a modern touch.

The younger Arnault plans a direct-control business model for Berluti that is similar to Vuitton, with no wholesaling and no licenses. He’s already bought back Berluti’s distribution in China and Hong Kong, which comprises nine stores. And the brand’s global reach continues to grow, with nine units in Japan and a Madison Avenue flagship that is slated for expansion.

Prices for rtw were not final at press time, but Arnault said they would be at Hermès or Tom Ford levels. Prices for the capsule collection range from 390 euros, or $520 at average exchange rates, for a shirt, to 3,900 euros, or $5,200, for a leather jacket.

Arnault met only one designer when he was seeking someone to expand Berluti into fashion: Sartori, whose work at Z Zegna he admired. “He had the right finesse and the right modernity,” Arnault enthuses. “When we met, in 30 minutes, I knew it would be him.”

“From toe-to-head” is how Sartori described the design process, constructing the brand’s fashion vocabulary by building up from the thick-soled, hand-fashioned footwear favored by such famous men as Andy Warhol, Yves Saint Laurent, Gérard Depardieu and Robert De Niro. Narrow pants were an obvious choice. Who wants to hide thousand-dollar shoes under billowing pant legs?

But the rest Sartori had to conjure, opting for close-to-the-body tailoring and such details as peak lapels and ticket pockets. Outerwear, by contrast, is generously proportioned.

Berluti’s heritage, stretching back to 1895, was a key consideration for Sartori, who was inspired by its shoes’ artisanal quality and unique colored patinas, the result of a proprietary process that takes 60 to 90 minutes to achieve. The designer is also fascinated with the late Forties and early Fifties, a period he considers the epitome of masculine elegance.

Not that he’s gone retro. “Classic but modern,” the soft-spoken Sartori says of his slim-lined suits, cropped sweaters and thick blousons. Character is a word that peppers Sartori’s conversation, referring to the powerful personalities that have gravitated to Berluti over the years, and his conviction that men should make the clothes they wear their own.

Sartori selected a broad cast of characters—“real men” and a few models—to wear his debut fall collection in a variety of set pieces that depict a certain privileged lifestyle: playing chess in the library of a country château, having cocktails in a groovy apartment, gathering with friends under a full moon for a midnight shoe-polishing party, with Dom Pérignon as the shining agent (something serious Berluti fans actually do).

The men ranged from their 20s to their 70s. “I don’t want to have any target in terms of age,” Sartori says. He describes what unites them as self-confidence and a penchant for “strong and masculine” style.

How the clothes are made is primary for Sartori—he’s adamant that they reflect both master craftsmanship and a human touch. Given that a classic pair of Berluti’s leather derby shoes takes eight to 10 hours of handwork, industrial production for the rest of the collection was not a consideration. Sartori recounts with pride that a signature sport coat takes 17 hours of labor, that coat sleeves end with working horn buttons and that his small-scale fabric suppliers can abrade suiting fabrics by hand to remove any shine factor (so as not to compete with that Champagne polish).

“We would like to be recognized for making sportswear with the same quality and craftsmanship of a handmade suit,” Sartori says.

Arnault says he’s confident Berluti will carve itself a handsome slice of the fast-growing men’s category. Later this spring, Arnault, Sartori and company will move to expansive new headquarters on the Rue du Faubourg Saint-Honoré, not far from the Bristol hotel.

“Men’s wear is definitely a business that’s growing faster than women’s wear,” Arnault says. And what he likes about Berluti is its understated nature and elite quality standards. “It’s always recognized without a logo, which for me is the ultimate luxury,” Arnault says. For example, he still has those birthday boots. “You never throw away Berlutis,” he says.

Just before Arnault—who limits his business lunches to one hour—unfolds his lanky frame from the banquette, he shares one last example of Berluti’s cult factor. He relates that Ralph Lauren, in Paris in spring 2010 for the debut of his flagship in a 17th-century town house on the Boulevard Saint-Germain, took time out from the festivities to pop next door to Berluti and place an order for a bespoke pair. “It shows how—even for the great ones—Berluti is the reference in shoes and boots,” Arnault beams.