Denim brands are betting their best weapon to combat a weakening economy and hedge against growing uncertainties in the retail environment... 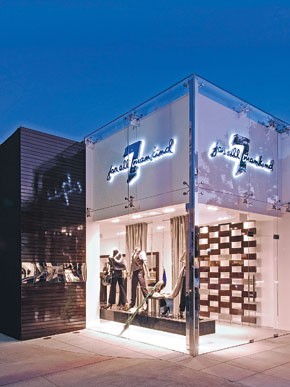 NEW YORK — Denim brands are bet­ting their best weapon to com­bat a weak­ening economy and hedge against growing uncertainties in the retail environment is to take matters into their own hands.

The world’s premier malls and shopping districts, particularly in the U.S., will start seeing an influx of labels vying for space over the next five years as brands such as Seven For All Mankind, True Religion, Lucky Brand and Joe’s Jeans make opening their own stores a priority.

Executives are counting on the stores to generate solid revenues, boost sales of their collections in neighboring multibrand specialty and department stores and provide a platform for the introduction of new product. This last element is likely to be the most crucial for brands that have made their names in denim, as the true test of success will hinge on consumers embracing them not as one-product specialists, but legitimate lifestyle labels.

The retail strategies of just a few prominent denim players puts the number of branded stores to be opened over the next five years as high as 300. Top premium brand Seven For All Mankind is leading the charge. Mike Egeck, chief executive officer of Seven, said last May that he was looking to open 50 stores in five years. Two months later, Seven was bought by apparel giant VF Corp. With a significantly deeper pool of resources behind it, Seven’s retail target quickly doubled to 100.

“If you just look at brand building, forget the category,” Egeck, who is also head of VF’s new contemporary brands division, said in a recent interview at the brand’s Garment District showroom here. “If you want to build a great consumer brand in today’s world, you need these showcase stores to speak directly to the consumer.”

Egeck is looking to the stores to improve Seven’s overall sales, brand image and its approach with wholesale customers. Like other premium labels opening stores, Seven is aggressively moving to position itself as a lifestyle brand by extending into new product categories. The company has introduced handbags and accessories and has plans to launch outerwear, footwear and eventually fragrances.

Egeck acknowledged that despite the strength of Seven’s name, retailers have been skeptical about testing new products. Fears of a weakening economy have store buyers being particularly conservative these days, as well. Signature stores, however, offer a place to prove product before approaching wholesale customers.

“As we extend the brand into new categories, as we push internationally, it’s really the best vehicle for getting the brand and its full product line out in front of customers,” said Egeck.

Denim represents about 95 percent of Seven’s business currently, but Egeck expects that ratio to gradually shift in the coming years. For 2009, Egeck anticipates new product categories to account for 20 percent of the business. By 2010, when he believes the line will be fully developed, he expects denim to represent 70 percent of sales and nondenim offerings to represent 30 percent. The balance is already closer to target in the three retail locations Seven has opened to date.

“In [our] stores, we’re already 75 percent-25 percent, so quite close to where we want to be,” he said. “And that’s without footwear.”

Becoming a retailer is helping Seven become a better wholesaler as well, he said.

“Just internally, we’ve become better students of sell-through reports, gross-margin return on inventory….We’ve acquired the retailer skills within the company now and that’s a real benefit to the wholesale side of our business,” he said.

Seven’s first three stores — a street-level location on Robertson Avenue in Los Angeles, a mall space at NorthPark Center in Dallas and a resort location at California’s Malibu Country Mart — were chosen to test not only the retail concept, but how it played in different settings.

“We wanted a street-front location in a major metropolitan location, an A-plus mall and one resort location,” said Egeck. “If we get proof on concept on those three, then we have that entire field open to us.”

Seven has revealed the locations of its next six stores in the U.S. and a store in Hong Kong will open in June. Egeck believes the maximum number of stores in the U.S. he’ll consider is between 100 and 120. In Asia, where company-owned retail will be the primary distribution channel, Egeck believes there is potential for more than 100 stores. In Western Europe, the company will concentrate on opening flagships. By 2012, Egeck hopes to have stores in London, Paris, Barcelona and Milan.

“We love the way the stores are coming out,” he said. “We like the way they look, we like what they’re doing for the brand and most importantly they’re performing well.”

Seven isn’t alone in pursuing an own-retail strategy, however, and the competition for prime retail space is already heating up, according to Marc Crossman, president and ceo of Joe’s Jeans.

“We’re in a period where everybody is trying to grab real estate to open stores,” said Crossman in an interview last month about the planned opening of the brand’s first store in August on North Damen Avenue in Chicago’s Bucktown neighborhood.

Joe’s Jeans is looking to open 50 stores in the next five years. Despite perceived softness in the overall apparel market, Crossman said landlords have been able to bid up leasing prices on retail locations. In the year his six-person retail management team has spent scouting locations, they have lost space to higher bidders.

“The premium space is a little better insulated relative to some of the other categories,” he said. “It’s not an easy environment in any way, shape or form, but relative to the low end, it’s not as difficult.”

“When we look at the operating margins of the retail business, they clearly are better than our wholesale business,” he said. “But for us, the main driver was to showcase our full collection. We don’t want to be another denim brand with a jeans wall. We view ourselves as a full collection and that’s what we need to bring to the public.”

True Religion has gotten a head start on its competition in the premium category. The company opened 11 stores in 2007 to finish the year with a total of 15. Sales from its consumer direct segment, which includes online sales, came in at $23.9 million, or 16.9 percent of revenues. Management said it intends to open 20 stores this year and an additional 20 stores in 2009.

Liz Claiborne Inc. has had similar success with Lucky Brand. Sales increased 9.8 percent to $421.6 million in 2007, driven by the brand’s owned-retail operations. In 2007, Lucky opened 36 full-priced stores and eight outlets, finishing the year with 171 full-priced locations and 15 outlets.

Signature stores can have a significant impact on smaller brands, as well. Scott Morrison, founder and designer of the Earnest Sewn label, set up shop in New York’s Meatpacking District more than four years ago and now has neighbors such as Scoop, Jeffrey, Diane von Furstenberg and Stella McCartney.

“It’s one of the things that’s helped build the backbone of our identity,” said Morrison, who is overseeing the brand’s retail expansion plans.

Morrison’s strategy for crafting Earnest Sewn’s identity has been anything but traditional. At Earnest Sewn stores, the core product — premium jeans — shares space with brands in other categories that possess what Morrison believes is a similar DNA. Customers shopping for $185 jeans can also pick up a knife from Bradford, Pa.-based W.R. Case & Sons Cutlery, which has been in business since 1889. Other items on hand include bags from Filson, a Seattle-based company founded in 1897 to outfit miners during the Alaskan gold rush, and Sol Moscot optics.

“The brand concept behind Earnest Sewn is something we think will stand the test of time,” said Morrison. “The reason we choose what we choose is because they all have a history and a sense of longevity to them.”

Morrison opened his second store in a former speakeasy on the Lower East Side of Manhattan in September and a former tire shop in Los Angeles will be home to a third store. Morrison also reserves space in each of the stores to give each one a special element. The Meatpacking store includes a coffee bar and a gallery space. The Lower East Side store has a flower shop and the Los Angeles unit will host a West Coast arm of vegan bakery Babycakes NYC.

Like Seven, Earnest Sewn has also gained an investor to help fuel its retail aspirations. In January, an investment group led by Brian Cytrynbaum, owner of Majestic Mills, made a “significant equity investment” in the brand and is looking to grow the wholesale business, expand product offerings and open signature stores at home and abroad. Morrison said the company will look to open 10 to 12 stores in the coming years. He’s come close to wrapping up a location in London and recently returned from a two-week trip to Japan.

“We’ve had much more of an opportunity to, if we wanted, go out and open a bunch of our stores, but that’s not our plan,” he said.

While Morrison doesn’t shy away from diving into up-and-coming neighborhoods, the brand is also taking advantage of more traditional locations. In September, Earnest Sewn will join Seven at the Malibu Country Mart.

“That’s probably the most desirable retail location in Southern California,” he said.

Premium brands aren’t the only segment of the market hopping into retail. Silver Jeans, with its products retailing for $75 to $90, will open its first branded store in Denver’s Park Meadows Mall in July. Michael Silver, who founded the label, said the brand’s retail strategy targets opening 50 to 75 stores over the next five years.

As with the premium players, Silver is looking for new avenues for growth and a platform to present customers with the full range of the brand’s assortment, which includes shorts, skirts, jackets and tops. However, unlike the premium brands, Silver is committing itself to becoming more of a retailer than a wholesaler. Silver said uncertainty in the strength and future of the retail channels in which the brand sells played a pivotal role in the decision.

“One reason is an ever-diminishing distribution channel for our product,” said Silver, adding he and his management team have watched as the number of independent multibrand stores has eroded, while at the same time multibrand chain stores have weakened.

“It used to be a ‘should we’ discussion at an executive level and now it’s a ‘we must’ discussion,” said Silver of the retail initiative. “We started strategizing two years ago. Every day that goes by, there’s more resolve to be in the retail side.”

Silver won’t be looking to make a marketing statement by opening stores in trendy areas on either coast, opting instead to follow his customers, who primarily shop malls in places like Denver, Minneapolis, Chicago, Nashville, Dallas and Houston.

“I’m going to the low hanging fruit, the territories that are strong in my product that will help vault me to further open stores,” he said. “Malls have the right traffic.”

The challenge for Silver remains the same as it does for any denim brand.

“Because Silver doesn’t necessarily have at this point a finite enough lifestyle feel, this was our opportunity to do it,” said Silver.