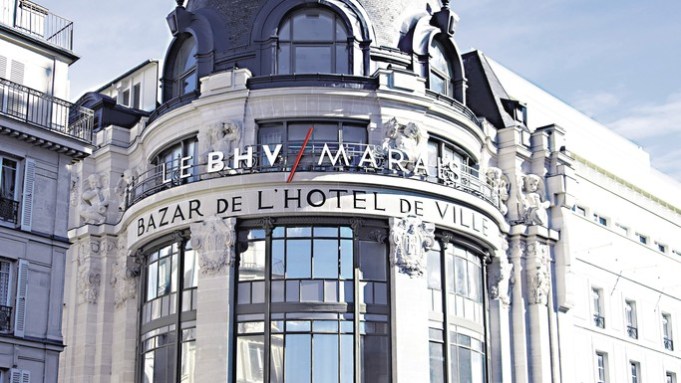 PARIS — Following 24 months of works and re-branding, BHV Marais has fully reopened, with parent Groupe Galeries Lafayette’s department store division expecting profits to edge up between 4 and 5 percent by year-end.

“Our objective is to double the group’s profitability within the division by 2020,” said its chief executive officer Nicolas Houzé, without disclosing any absolute figures.

Together with its branches, BHV Marais, which is one of the oldest department stores in town dating back to 1856, accounts for 10 percent of the group’s department store division.

Mostly known as a destination for its exhaustive hardware selection and DIY products, the new BHV puts a clear focus on a lively mix of fashion, beauty and food.

“The economic context is a complicated one; it was necessary for us to take a more aggressive standpoint, while embracing the store’s atypical character. BHV is not Galeries Lafayette; it’s not Le Bon Marché; it’s different,” said Houzé.

The eight-story unit amped up its fashion offering, introducing a number of new brands, including Helmut Lang, MM6, Urban Outfitters, Topshop and Anthropologie, which is exclusive in France and due to launch on Sept. 5.

Alexandre Liot, director of BHV, said the management “deliberately left luxury brands out of the equation, wanting to stay accessible and true to the neighborhood’s clientele.”

“It’s where people come to get inspired, not just do shopping,” he added.

A new space featuring young designers is slated to launch by yearend.

Difficult sectors such as multimedia and electrical appliances, which face great competition from larger chains, have been reduced and refocused on a few key brands, while the fashion surface almost doubled to 19,400 square feet, featuring 870 different brands. An additional 6,500 square feet have been assigned to shoes, while the store’s beauty department counts Marais’ biggest perfumery among its most notable features.

The store’s culinary offering has also been revamped with seven different spots including a sushi eatery and La pâtisserie des rêves, one of Paris’s most coveted pastry shops, which here also offers an exclusive salty menu. Le Perchoir, a trendy open-air bar on the rooftop, and cooking classes by French chef Alain Ducasse and his team, are meant to accentuate the store’s fun factor, as Liot put it, adding that about 1,100 square feet on each floor would be dedicated to pop-ups and exclusive collaborations, keeping the offering fresh.
“Our main message is: This is a department store that lives and moves,” he said.

The changes came at a cost. “Over the course of the last two years, we have invested 35 million euros [$45.2 million at current exchange] in the location, and of course the renovations have affected our turnover; we lost about 10 percent,” calculated Houzé. He added that BHV would break even this year and return to the 2012 levels of sales (before the makeover) by 2015. This will be accompanied by the launch of BHV e-commerce in February, which Houzé projects will account for 10 percent of sales by 2017.

He said although the international clientele is “not growing as before,” it’s nudging forward. He named Brazilians, Indonesians and Russians among those groups coming less, but noted that the Chinese were still important customers, albeit their preferences have changed. “Instead of buying jewelry, they make more purchases in the beauty and accessories departments,” he explained.

As far as the BHV Marais location is concerned, Houzé noted: “While in 2012, 6 percent of the store’s customers were tourists, in 2016 we expect this number to jump to 20 percent.”

The executive also expressed his optimism about more flexible opening hours on the weekends. “It’s a complicated subject, but we have good reason to hope that Sunday openings will be possible in 2015,” he said. In addition, the retailer is negotiating with its workers’ unions, proposing double pay on a voluntary basis.

He pointed out that the group could add another 8 to 10 percent in turnover by keeping Galeries Lafayette Haussmann, its main Paris location, open on Sundays, otherwise tourists would be taking their money to other places such as London and Italy.

Haussmann is undergoing some changes of its own. The department store’s high-end food court, which used to be on the first floor of the men’s store, has been moved across the street to form a new outpost dubbed “art de vivre à la Française,” comprising food and home. It is due to open in mid-September, thus making room for a new men’s flagship slated for fall 2015, offering “a bigger shoe section, more luxury brands, but also sports and lifestyle,” the executive said.

“We are also investing in the provinces, where we have about 54 stores,” said Houzé. He explained that several locations have recently undergone or are currently undergoing renovations, including Lyon, Marseille, Nice and Metz. “We are doing everything we can in order not to have to close any stores in the provinces,” he assured, although these have seen their sales decline by 0.5 percent in the second quarter.

“We are very confident that we can make it work despite the fact that consumer spending is not flourishing at the moment.”

All in all, the group is spending 100 million euros, or $131.9 million, a year to upgrade its department store division, he divulged.

By 2017, the French retailer will count eight department stores abroad. The existing locations in Berlin; Dubai; Jakarta, Indonesia; Casablanca, Morocco, and Beijing will be joined by Istanbul at the end of 2015; Doha, Qatar, in 2016, and Milan in 2017, with more developments in other capital cities likely to follow, “but not at all costs,” said Houzé, projecting to double the international outposts’ share from currently 5 to 10 percent of the group’s total turnover by 2020.

Separately, last week Galeries Lafayette launched its first outlet store at One Nation near Paris, billed the largest outlet shopping center in France dedicated to fashion and luxury. The 9,150-square-foot unit stocks women’s, men’s and children’s fashion, along with accessories.