A novel approach to a retail center has a lot of moving parts. 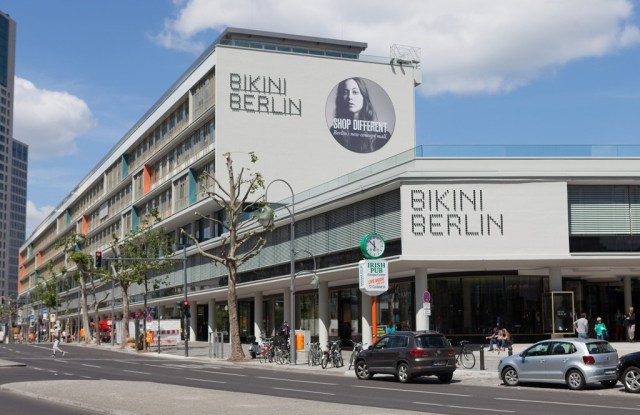 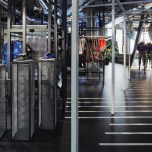 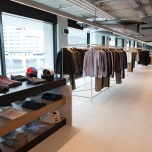 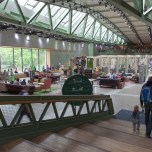 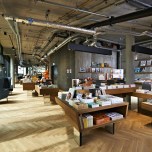 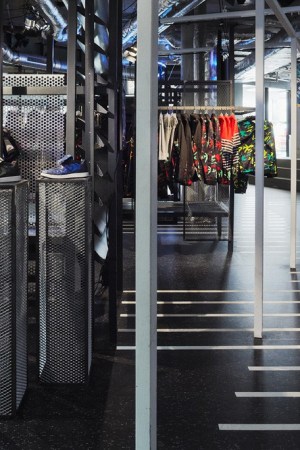 Nike's display in the Supernova area. 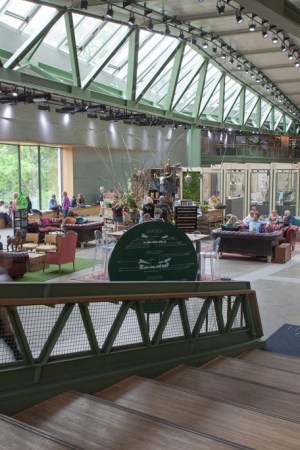 Can niche achieve critical mass? Berlin’s newest shopping center, Bikini Berlin, is in the process of finding out.

Marketed as Germany’s first concept mall, Bikini Berlin opened in April in the landmark Bikini-Haus (“Bikini House”) in the center of West Berlin. Situated between the Berlin Zoo railway station, the Kaiser Wilhelm Memorial Church and Kurfürstendamm, Bikini-Haus, built in 1957, was an important symbol of reconstruction and revival in the still war-tattered city. Over the years, however, the building, which originally housed the Berlin Women’s Wear Center and later the Berlin Film Festival, fell into disrepair and neglect, its 656-foot-long frontage accommodating a hodgepodge of shabby enterprises.

In 2002, Munich-based real estate company and developer Bayerische Hausbau bought the entire Zoo Center ensemble, including two high-rises and the adjoining Zoo Palast cinema. From the project’s start, however, the goal was not to create a conventional shopping center with big-name, mass-market anchor tenants. Rather, the svelte Bikini-Haus — so-called by Berliners because the open colonnade in the middle, now glassed-in, cut the building into a bikinilike top and bottom — was to be filled with special, non-commonplace names in fashion and design, as well as assorted gastronomical offerings in about 183,000 square feet of sales space. The entire area has about 969,000 square feet of floor space, and a total of 550,000 square feet of rental space.

Construction (to the tune of a nine-digit investment in the Zoo Center complex) began in late 2010. A new architectural extension — the so-called “Bikini Pool” — runs parallel to the original Bikini-Haus edifice. This not only considerably expands the available sales space on the first two floors, but permits a direct view into the zoo’s fauna and flora through panorama windows on the ground level, and from the sprawling 75,000-square-foot rooftop oasis that runs the entire length of the building on the third floor.

The smaller high-rise to the back is now the trendy 25hours Hotel, its restaurant and the Monkey Bar generally booked out, and the lovingly restored but fully modernized Zoo Palast cinema is also one of the hottest tickets in town.

Bayerische Hausbau enlisted local concept-store pioneer Andreas Murkudis to advise on the tenant search, which proved to be no easy task. Though the west side of town, especially upper Ku’damm, has seen a major resurgence of prime retail activity in the last few years, Bikini’s position on Hardenbergstrasse had no proven consumer traffic, particularly with the kind of design-oriented, upmarket clientele Bikini was hoping to attract.

Murkudis is a big fan of the landmark building, and not only took space on the third floor with its roof garden entry for his signature AM concept store and neighboring Aspesi shop, but space on the second floor for his new younger platform, AM+, and yet another adjoining area specifically for furniture. Joining him on the patio level is book publisher Gestalten — which operates a café in its Pavilion, in addition to a greatly extended selection of books and design objects compared with its original store in Mitte — and Supermarket, the Belgrade-based concept store whose first German door here also includes a café. Mauro Grifoni is also on hand with its first outpost in the country, as is Odeeh, the German designer label that chose Bikini Berlin for its retail debut. Premiata, Address, Umasan, Parosh and Gianni also contribute to the mix.

And how’s business? “Actually very good,” Murkudis told WWD. “AM+ is doing excellently, much better than expected. We have many customers buying big-ticket items, like 1,000 euro [$1,357] Porter bags and a lot of Acne. The furniture store has picked up in recent weeks, and we’ve sold 400 pieces a month at Aspesi. It was my main store that was a bit slow in the beginning.”

Throughout opening weekend, 110,000 people a day surged to Bikini, then 50,000 and now about 20,000 people a day regularly visit Bikini during the week and up to 30,000 come on weekends. “In the beginning, a lot of people were just curious and didn’t buy,” noted Murkudis. Now, those who don’t want to “Shop Different,” as Bikini Berlin’s ad campaign instructs, “are staying away, and those who are interested are coming.”

Jörg Ehrlich, who with Otto Drögsler founded and owns Odeeh, and whose store seamlessly connects to Murkudis and Aspesi, also said business “has been surprisingly good.” Sales have been on plan, but more importantly, perhaps, for the brand’s first retail venture, is “we’re gaining a lot of experience with the customers. A high percentage are Berlin people and, of course, there are tourists: lots of Scandinavians and some Americans. Some buy one piece, others really shop and go away with five or six items,” he said. But not before 4 p.m.

“It’s an evening business for us, and the main days are Monday evening plus Thursday and Friday. It seems people who are busy prefer to stay home on Saturday,” Ehrlich suggested.

With its café, Gestalten does get morning traffic, and through to the evening with people “wanting to have drinks and enjoy the sunset on the big outdoor terrace,” said Lina Kunimoto, head of marketing. Business has been “strong and steady.” What’s surprising, she noted, is how varied the customer base is for the store’s wares, which range from artisanal chocolate to high-end design objects, including exclusive collaborations like Elisa Strozyk’s collection of wooden textile runners for the Bikini store.

“Of course, with all the hype about Bikini Berlin and the West these days, we have a lot of onlookers who are curious and coming to explore the complex, but we’re also seeing a lot of sophisticated customers from Charlottenburg and Potsdam. This has been a positive thing for us — expanding our clientele,” Kunimoto stated, though Gestalten’s core customers, “including young creatives and design-savvy, discerning shoppers,” are also frequenting the new location.

The situation is spottier on the second floor, which besides the Murkudis spaces is highlighted by LNFA, a rough-edged space featuring a revolving roster of Berlin labels and a store from design legend Vitra. Schiesser is temporarily filling a gap with an exhibition of its limited series Artists for Revival undershirts, and Heldart is operating a semiprivate art space. Hannover’s high-end business-wear specialist, Terner, will enter in late summer.

Observers say the layout is dark and tight, and indeed it’s a challenge to see into LNFA’s windows, though this doesn’t seem to have impacted the performance of Sevil Uguz’s platform for younger or lesser-known designers. There are currently 39 designer collections at LNFA. “It’s going great. We’re booked out for the next half-year,” said Uguz, whom Bikini management asked to come aboard. “You’re doing something different, they said, and I knew a lot of designers, all of whom have problems finding [sales] agencies and trouble earning money under the normal retail conditions. So we started.”

Another pet project of Bayerische Hausbau is Supernova, Bikini Berlin’s “retail future lab,” which features prominently at one of the main entrances. Curated by Berlin creative agency Kemmler Kemmler, the goal is to “redefine the function of retail in the digital age,” according to Bayerische Hausbau. It presents experimental formats set to change every three months.

The first, running through July 13, celebrates soccer during World Cup season and features products by Nike and Berlin streetwear retailer Firmament in an interactive environment sparked by monitors flashing old sci-fi films, a virtual playing field in which consumers can test their soccer skills and a chicken-wire stadium in which players can take their place on the winner’s podium.

While going well, it’s been a learning experience, admitted Katharina Kemmler. The main lessons: Hold on to half your budget to keep things fresh.

“A lot of shops — including us — spend almost all of their energy and budget on creating fancy architecture that looks lovely,” she remarked. But after a few weeks, “you need new events, new activities, new shop windows, new stories to keep your shop fresh.”

Lesson 2: People don’t want to shop in the dark. The team’s idea of a “dark, aggressive, brutalistic science fiction world…works great in photos, mood boards and videos, but people actually like some light when shopping [so they can] see the product.”

Lastly, even in this high-tech age, keep it simple, she advised. “You can put a big red button in your store with a sign saying, ‘Please push here.’ And people will still be confused about what to do with this piece of technology.”

Sales assistants are crucial on the floor to give encouragement, “because people are very afraid to embarrass themselves in public. But with support, they get utterly excited.”

Compared with this experimental outpost, some of the ground floor’s key shops strike some observers as more of a stopgap measure than a curatorial solution. “Upstairs is coherent, downstairs is not,” one Bikini tenant remarked.

For Closed, however, “it was a statement for the brand to be in this location, as it set out to be something unique and conceptual. It’s a great path we took,” said Til Nadler, managing partner of sales and marketing, “due to the fact that we’re on the ground floor and visible from the street. We’re getting comments that finally, Closed has come to Berlin. Obviously, though we’re in [Berlin stores including] KaDeWe, 14 oz., Peek & Cloppenburg and Mientus, we never made that impression.”

Nadler also noted Closed is benefiting from a well-heeled and informed Berliner clientele at Bikini, as well as tourists. “It feels like a resort destination. We had the highest turnover on Ascension Day [May 29] ever.”

The largest source of contention, however, are the ground floor’s Bikini Boxes: temporary wooden modules that brands of all sizes and ilks can rent from three to 12 months to test the retail waters. At present, the 24 boxes include purveyors of tea and cookies, puzzles, hair stylists and nail bars, cosmetics, young T-shirts and street fashion labels, at-home wear, design products, accessories and jewelry. Some say the units look like Christmas market booths crossed with trade-show stands, others say they make a prisonlike impression, due to the wire that encloses them.

“It’s a really nice idea to give younger brands a testing ground,” commented one Bikini retailer, who requested anonymity. “But I find the architecture tricky. The chicken wire and wood is OK for jeans, but it doesn’t work for something more delicate like lingerie. And without them smack in the middle of the Bikini Pool space, one could do a huge restaurant-café that would function well in winter too with the panorama windows looking out into the zoo.”

For Christophe Scharf, BNP Paribas’ head of retail in Germany, the main issue is placement. “They could have used a larger store to realize the same goal, especially with empty space available. But to give them the best location…” he said of the boxes. Moreover, their position in the middle “means you can’t see one side [of the mall]. And if you enter Bikini from Breitscheidplatz, you can’t see the main staircase leading up to the other floors. There have been some problems and mistakes on the construction side.”

Nonetheless, he summed up, “this part of Breitscheidplatz has always been an ugly part of Berlin, and that has now changed.”