J.C. Penney had reason to celebrate on Monday night, as it’s been seven years since Bisou Bisou launched exclusively at the retailer. 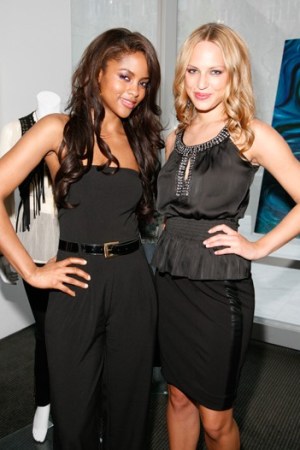 J.C. Penney had reason to celebrate on Monday night, as it’s been seven years since Bisou Bisou launched exclusively at the retailer.

“It’s all about getting J.C. Penney to push the envelope. It’s not about taking Bisou Bisou down,” said Michele Bohbot, the brand’s founder and creative director, who said her deal with Penney’s allows her to do just about anything she wants with the collection on a creative level. “I’m very much inspired by a chic, powerful, confident woman, and I’m able to bring a lot of newness to J.C. Penney with this collection.”

To celebrate Bohbot’s seventh year with the store, the company hosted a dinner at New York’s Museum of Modern Art’s restaurant, The Modern. The scene was fitting for the event, as Bohbot used the opportunity to show off a selection of her own artwork — paintings that inspired her summer collection of maxidresses.

“Painting is a passion of mine, and I think a lot of people didn’t know that about me,” she said.

Seven years ago, the launch of Bisou Bisou at Penney’s opened the retailer up to the contemporary apparel sector for the first time. Since then, the store has launched a slew of exclusive lines in various departments and has added more contemporary brands such as Allen B. and I [Heart] Ronson.

It’s brands like these that have enabled Penney’s to take market share from key competitors, and the company is continuing with the launch of exclusive brands. Last week at the retailer’s meeting with analysts and investors in New York, top officials from Penney’s said they are sensing more positive trends in consumer shopping habits.

“We are not seeing a wild or crazy shift, but there’s been a slight uptick,” said Myron E. “Mike” Ullman 3rd, Penney’s chairman and chief executive officer.