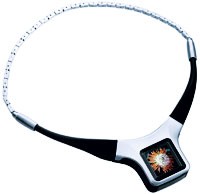 The nerve of some people. They think they can just load up the underside of their carts with pricey goods, pay for a candy bar, and waltz right out the store’s front door scott-free. Well, they can, if the cashier forgets to look or is in cahoots with the thief. Unless, of course, the store has LaneHawk, a sharp-eyed robot that can be trained to recognize particular items and tote them up, even if they’re partially blocked or there is more than one of the same thing. The cashier confirms the quantity. The system is faster than manual scans and has a very low error rate, according to maker Evolution Robotics of Pasadena, Calif. LaneHawk consists of a rugged black box about the size of a VCR (for processing) and a camera for one lane. It’s not as cute as R2-D2, but it might be more efficient.

It may not be diamonds and pearls, but it will display a digital photo of anything the wearer likes. The Nokia Medallion comes as a steel and matte rubber choker or a pendant with leather straps that can be worn as a necklace or bracelet. It can hold as many as eight photos, which can be uploaded via infrared with a digital camera, phone, or desktop computer. The rechargeable battery lasts as long as 15 hours, said Nokia of Finland. Perfect for showing off pictures of loved ones.

One day, we may all read the newspaper on flexible sheets of electronic paper developed in Xerox Corp.’s renowned Palo Alto labs. Until then, though, there’s SyncroSign, based on the same SmartPaper technology, which Gyricon LLC of Ann Arbor, Mich., has adapted for use in retail. The signs look like pale gray Etch-a-Sketches, except they can’t be erased by shaking. They’re networked into store databases, so prices, messages, and graphics can be changed at the touch of a button. They sit on rounders or shelves – no power source is necessary – and use so little juice that their batteries last two years even if the signs are updated several times a day, said company spokesman Jim Welch. The signs spell out their message via microscopic black-and-white beads packed tightly inside the sign’s plastic frame. An electrical charge causes the beads to shift position and display an image by showing either their black or white faces. The company is working on a color version.

Finally, someone’s found a use for all that security-camera footage of shoppers milling about in department-store aisles and fingering tables heaped with sweaters and gift packs of lotion. Advanced Interfaces of State College, Pa., turns such plotless, low-res flicks into customer data. Its AI Intelligent Store Environment classifies shoppers by age, gender and ethnicity (black, white, Hispanic or Asian). It counts traffic and measures conversion rates. It highlights busy areas to help merchants decide where to place goods, promotions and signs where they will draw the most attention. The company is working on a real-time alert that will let salespeople know when a customer is being ignored.

Nearly 72 percent of manufacturers and retailers with revenue of $5 billion or more will spend less than $500,000 on radio frequency technology (RFID) this year. The majority of smaller companies say the same.

Survey of 90 retailers and manufacturers by Deloitte Touche Tohmatsu and EPC Group.