Even if you don't live in New York, you can see the famed Bergdorf Goodman Christmas windows online. 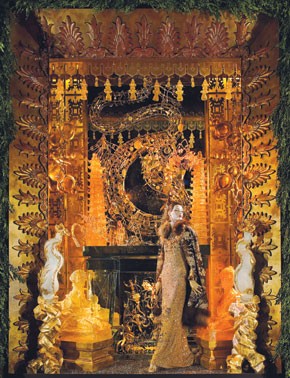 Even if you don’t live in New York, you can see the famed Bergdorf Goodman Christmas windows online. Inspired by the “natural Baroque” style of the late Tony Duquette, each rococo window represents an element such as air or fire (above). All five are showcased in a special section of the retailer’s Web site titled “Unveiled.” Bergdorf’s recent “shop by floor” feature also makes shoppers feel they are inside the store. A simple drawing of the building and photos of each floor direct online customers to the department they wish to visit.

Attempts to wrest control of the remote will turn into a playful pillow fight with these prototype cushions designed by Didier Hilhorst and Nicholas Zambetti for Dutch design firm Droog. One pillow switches the channel, another sets the volume, and a third turns the TV on and off.

Brazilian neo-pop artist Romero Britto jazzed up a high-end laptop with imagery taken from his painting “Mia’s Jungle.” NVousPC, a Miami-based computer maker that offers custom paint jobs and graphic design, rendered the design in high-gloss paint similar to that used on luxury cars. The Windows notebook is tricked out for mobile entertainment with a speedy Intel Core 2 Duo processor and a large (160 gigabyte) hard drive. The one-of-a-kind laptop is on display at the artist’s gallery, Britto Central, in Miami and costs $8,800.