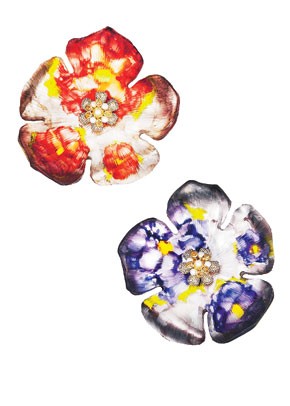 The Brooklyn-based jewelry designer is opening his second store in late May on Bleecker Street, home to designer boutiques, upscale eateries and specialty store chains.

Bittar unveiled his Broome Street flagship in March 2004 and plans to open four more stores in the next five years in cities such as Los Angeles, San Francisco and London. He may also add another New York location on Manhattan’s Upper East Side.

The new, 350-square-foot space will feature Bittar’s signature Lucite bangles in eye-popping colors and handcrafted pearl and gold vermeil pieces that have helped him achieve a cultlike status among the costume jewelry set. Having started out selling his collections on the streets of SoHo 20 years ago, Bittar has grown into a designer whose jewelry wholesales in 600 stores worldwide, including Saks Fifth Avenue, Nordstrom and Selfridges.

Like its other location, Bittar’s new store fuses antique touches and modern objects. Victorian wallpaper mixes with industrial pieces that showcase the jewelry, as well as works of art. Cherry blossoms adorn one wall — the inspiration for which was taken from a scene from the 1959 film “North by Northwest.” With a dark gray rug sweeping the floor and oak veneer cases lining the walls, the store will evoke a homey feeling as opposed to the austere aesthetic that Bittar feels is dominating today’s retail climate. He claims the store is “one part bedroom, one part 1940s department store.”

“I didn’t want to mimic the same store identity that’s been rolling out lately,” Bittar said. “It seems like everyone is doing the ‘all-white Sheetrock’ look and it’s minimal to the point of boring. I want to keep the same fusion of antique and modern that my other store has, but in a different way.”

Bittar’s Broome Street store also juxtaposes the new with the old. The walls vary between stark Plexiglas and antique wallpaper. A lion-footed Victorian table dominates the center of the room.

“I want my customers to feel something special upon entering my stores, like they are stepping back in time,” Bittar said.

According to sources outside of the company, his 13-year-old brand has estimated sales of about $25 million. Each year Bittar experiences double-digit growth and has just seen a record 30 percent sales increase from last spring into fall. He often collaborates with ready-to-wear designers, having done Michael Kors’ bold necklaces, rings and bangles for the designer’s spring show, as well as the bright, beaded pieces for Bryan Bradley’s Tuleh spring collection.

“I enjoy straddling the bridge between costume jewelry and high fashion,” Bittar said. “I think it’s all about the high drama in jewelry today and about having an impact. On the sales end, we’re feeding this insatiable need right now.”

Tara Silberberg, owner of Brooklyn jewelry store The Clay Pot, is known for featuring independent, under-the-radar brands. She has carried Alexis Bittar since he began wholesaling the line.

“Alexis has really grown in such interesting ways over the years,” Silberberg said. “Part of it is the strong fashion direction he takes, but he always does basics and favorites, so it’s a good combination that hits a wide age bracket. I recently sold one of his Lucite pins to a 90-year-old woman. He is so inventive and creates a big range for lots of people to enjoy. You’ve got the fashion girls and the grandmas. It’s amazing to me.”

Bittar is also at the fore of a costume jewelry moment that is extending from the runway to retail. Fashion houses such as Balenciaga and Lanvin are delving into the category in great numbers and with the threat of a recession looming, the fashion jewelry market is still thriving.

“I think especially when times get tough, people love this kind of jewelry,” Silberberg said. “With the metal market so crazy, fine jewelry is outrageously expensive and it’s going to definitely impact retailers this coming winter. So I sense that those in the midrange — if they can capture that and can have a customer for that — will do well. People are looking to not break the bank and still look good. And the runway backing is going to make a big difference.”

Bittar doesn’t seem to mind the increasing competition in the marketplace. He managed to bring his eccentric, colorful brand into the fray during a time when minimalism was a key trend and bright Lucite bangles were not exactly lauded.

“Costume jewelry is a cottage industry that has been growing heavily over the past five years,” Bittar said. “I remember in the Nineties, buyers would ask, ‘Is jewelry still happening?’ But now, young girls are experiencing it for the first time and they love it. Older women want to know if it’s OK to pile on that next bangle and it is right now.”