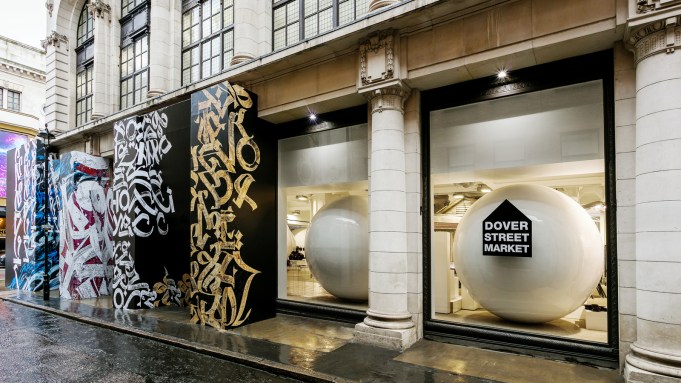 LONDON — It was black — and white — Friday at Dover Street Market, which is marking 15 years in business with a takeover of its Haymarket store, and rails and shelves filled with black and white products from brands taking part in Monochromarket, a temporary anniversary installation.

Brands and big fashion names certainly delivered on the specific brief from Adrian Joffe, cofounder of Dover Street Market with Rei Kawakubo and president of Comme des Garçons International, and gathered at the store Friday evening to mark the anniversary, downing Champagne and grazing on big, luscious canapés from the Rose Bakery upstairs.

Guests included Molly Goddard, Simone Rocha, Stephen Jones, Craig Green, Charles Jeffrey, David Owen, Marine Serre, Cecilie Bahnsen and Katie Roberts-Wood. “I grew up coming to Dover Street Market, it was like a museum for me, it was a fascinating place. I couldn’t quite believe it when I started selling here,” said Goddard, who created a special black-and-white tulle dress for the anniversary.

The designers went all out with their monochrome and two-tone designs: Pieces on display include striped Hotlips rings by Solange Azagury-Partridge; white Gucci sneakers dipped in dark paint; logo T-shirts from Kaws, and Bottega Veneta’s wrinkly leather clutch done in a special black matte wash.

A Burberry two-tone trench, coal-colored Cartier bracelets and rings and a Lacoste polo shirt with dark polka dots are also among the special products that come with dedicated silver swing tags.

Molly Goddard, Simone Rocha, Sacai, Rick Owens, Craig Green and Elena Dawson are among the myriad brands that pumped out special products for the Dover Street Market, which over the past decade-and-a-half has become a brand in itself and spawned sister stores in New York, Beijing, Tokyo, Singapore and Los Angeles.

To mark the 15 years in business, Kawakubo’s Black Market, a collection of products including furniture, leather teddy bears, Lewis Leathers jackets, and Zana Bayne harnesses with messages picked out in studs, has made its first appearance outside Japan, in a stand-alone, hut-style structure on the ground floor of the London store.

Every detail has been considered, from the soon-to-sell out products — a shiny black DSM shopper adorned with a Gucci stripe; A Bathing Ape T-shirts glistening with Swarovski caviar crystals, and a lineup of Idea books with black-and-white covers — to the specially created art installations by Elena Dawson and Futura.

Joffe, who opened the first DSM with Kawakubo on London’s Dover Street in 2004 and moved it to Haymarket in 2016, said in an open letter the last thing he wanted to do was look back. For him, anniversaries should be a time to reflect on the future.

“Back-slapping and trumpet-blowing have never been our forte. We only want to stand proud and fierce with the community we have created and look ahead and how we can continue to push forward, break more barriers, be even better and more responsible” from a social, political and environmental point of view, wrote the forward-thinking Joffe, who has made brick-and-mortar retail come alive at a time when so many fashion stores are dying, or desperately searching for new paradigms.

In the U.K. in particular, footfall is slowing, consumer confidence is plummeting and worried spenders everywhere are holding back, waiting for the general election on Dec. 12, and for the possibility of a real exit from Europe in January if Prime Minister Boris Johnson’s Conservative party wins a majority in Parliament.

All of those macro factors have clearly had little impact on Dover Street Market, thanks to Kawakubo’s creative flow, Joffe’s business smarts and the couple’s passion for merchandising, talent-spotting — and democratic selling. Dover Street Market offers products ranging from buttermilk scones, clotted cream and jam at Rose Bakery, to T-shirts for less than 100 pounds, to multithousand-pound clothing and fine jewelry across five floors.

It is telling that groups of kids in sneakers and hoodies spent Thursday night crowded outside the discreet entrance on Orange Street, waiting for the store to open at 11 a.m. on Friday. Other Dover Street customers, meanwhile, were busy putting themselves on a waiting list to buy one of the two black Futura sculptures — on display on the ground floor — with a price tag of 28,225 pounds.

“Here’s to our future and the future of London and of our country,” Joffe wrote in his letter. “And long live the brick-and-mortar store, long live our staff, customers and friends. And thank you for the next 15 years.”

The enthusiasm — and joy — of the designers was palpable on Friday night, with nearly everyone saying that selling at Dover Street Market is like having a magnifying glass placed on the brand.

“They were our first stockist and have been so supportive — they’ve given us so many opportunities. We’ve traveled to New York, to Tokyo to promote ourselves,” said Katie Roberts-Wood, whose artfully knotted and embellished black dresses are on display at the store. “They take you on and then say ‘Go for it.’ They give designers freedom, which is rare.”

Jones said that no other retailer is doing what Dover Street Market is doing: “They support young designers. I don’t think any other retailer does that now — they can’t afford to,” said Jones, who has been working with Kawakubo since 1986. He said it was the ultimate honor to be able sell at Dover Street Market. “If you are a designer and Rei Kawakubo asks you into her ‘home’ it is the greatest accolade ever,” he said.

David Owen, cofounder of Idea, the vintage book specialist beloved of designers, started small at Dover and watched his business grow. Idea began selling books in the basement of the former store on Dover Street, attracting clients including Marc Jacobs and John Galliano. It would later move into merchandising, with bags and T-shirts, and become a brand in itself.

“Books don’t sell as well as clothes so we were constantly asking ourselves ‘How do we justify our presence here?’ so we started doing bags and shirts. Adrian lets people grow, but we thought it was probably best not to rely on his goodwill, so we’ve grown upward — and outward — and we’ve had to raise our game.” Idea also sells at DSM store internationally in cities including New York, Los Angeles and Ginza.

Jeweler Delfina Delettrez, who has just opened a new store in Rome, said DSM represents “a kind of weird family, where designers and creatives feel protected and understood and also challenged by all these great projects. It’s a great balance, like an alchemical perfection between creativity and retail.”

The words family and home were flowing from designers’ mouths all night. The Danish designer Cecilie Bahnsen, who has been selling at DSM ever since Haymarket opened, said the team “just always get the brand and our aesthetic. When I see the collection here it feels at home.”

Simone Rocha, who has just opened a store in Hong Kong and is working on her next collaboration with Moncler at the moment, said she’s proud to be in the DSM mix. “There’s a dialogue with DSM and Comme des Garçons, because it’s all Comme des Garçons designers here on the [ground] floor. It’s amazing to be part of the family.”

The Paris-based designer and LVMH Prize winner Marine Serre said she’s known Joffe since she started her label, two years ago. “He came to my little flat and bought my master’s collection. Since then there’s been constant contact about what I’m doing and how I’m developing,” she said, pointing to the all-black installation she created for the anniversary with her friend Kristina Lambert. It features black cages and a spooky revolving mannequin.

“It was really based on DSM’s monochrome theme. For me, that’s about black and my last show was quite dark too, so it all came together. It’s a future apocalyptic space,”  she said.

Masayuki Ino, the designer of Doublet and winner of the LVMH Prize in 2018, said he started working with DSM five years ago, “when nobody knew about us. Doublet was only in Japan, DSM let many people outside Japan know about us. DSM helped us grow and I am very thankful.

Craig Green said DSM was one of the brand’s earliest stockists, “and has been supporting us from the very beginning. As a student, my tutor Louise Wilson [the professor of fashion design and course director of the M.A. Fashion program at Central Saint Martins from 1992 until her death in 2014] would test us. I remember vividly, her asking: ‘Have you been to Dover Street? Do we know what Dover Street is? What do we think of it? Have you seen the new collections in it? If you don’t go to Dover Street, you don’t know what’s going on in fashion.’ It has always been a pinnacle, a landmark, in London. When they first decided to stock our collection, it was a big moment.

Charles Jeffrey said that “without Dover Street Market, we wouldn’t have been able to fund our first season production. I don’t come from money. I come from the working class, so having a company like DSM giving us a deposit to be able to make the collection, and then turn a profit afterwards, it was so instrumental in building my business.

Nicholas Daley, who used to work at DSM, is another designer who’s grateful for Joffe’s and Kawakubo’s support. “I used to work at the old store on weekends. During that time I was in my final year at Central Saint Martins, and working weekends allowed me to pay for the materials to create my final collection. And now my own brand is stocked here so that’s the reason why I’m here tonight. It makes sense to appreciate the people who support you in many ways.”