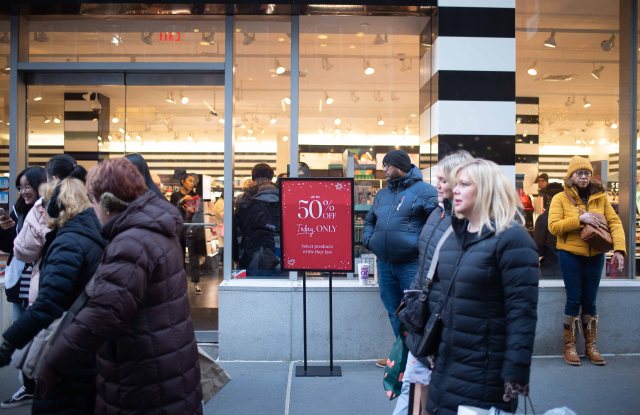 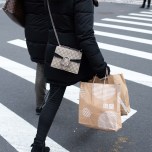 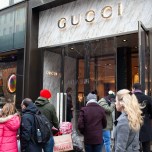 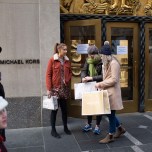 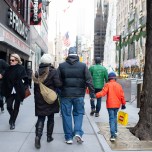 Holiday selling is proceeding according to script, with consumers shopping online and in stores Thursday through Saturday at levels that supported widespread forecasts for seasonal sales gains averaging in the 4 percent range.

For now at least, the industry mood remains upbeat and the economy strong, although there are concerns about the shorter calendar — six fewer shopping days between Thanksgiving and Christmas than last year — and intensified promoting impacting fourth-quarter margins. Also, the robust growth in online sales continues to come at the expense of brick-and-mortar retail businesses.
The Neiman Marcus Group reported increased traffic in all of its online and off-line properties for Black Friday. “Our customers were delighted by our overall experiences and we saw major interest within our ladies’ shoes, contemporary, men’s, and beauty departments,” Geoffroy van Raemdonck, NMG’s chief executive officer, told WWD.

“Our associates were connecting with customers throughout the day not only in-store, but through text and our digital customer tool. Black Friday was also one of our biggest demand days online since we launched our web site in 1999….We plan to continue offering competitive and personalized offers on Cyber Monday and through the rest of the holiday season.”

“We’ve had a very positive start to the holiday season, double-digit increases over last year,” said Mary Ellen Coyne, ceo of J.McLaughlin. “We are encouraged that in such a promotional environment the majority of our business is still driven by full price, and we’re seeing a nice mix of self-purchasing and gift-giving.”

Bob Mitchell, copresident of Mitchells Stores, said although it’s too early to predict how holiday will wind up, “We’re still cautiously optimistic it will be a good season. With the calendar shift, we’ll end up slightly ahead,” with low single-digit growth.

“It was a good start for holiday. We are reasonably pleased and online had a very strong weekend,” said one ceo of a major national retailer, who requested anonymity. “But the shorter season does make it harder to read. You have to take it day by day, but in the end I think we will have a good season.”

Disney Stores opened at 6 p.m. Thanksgiving and stayed open into Black Friday. “Disney store locations saw strong traffic at opening and throughout the night into Black Friday,” said Edward Park, senior vice president, unified retail, Disney Parks, experiences and products, adding that there was a bump in traffic between 11 a.m. and 4 p.m. Friday. “Traffic at our outlet locations has been particularly strong all year.”
“Overall, the top line has been good,” said Mike Sansone, principal in the consumer and retail practice at the A.T. Kearney consulting firm, commenting on holiday selling. “Underneath that, I am seeing a roughly 3 percent brick-and-mortar decline for Thanksgiving and Black Friday, but combined with continued online increases there’s still healthy consumer spending.”

Sansone said projections for 4 to 5 percent total seasonal sales gains are “not out of line” and that companies with good cross-channel businesses — notably Best Buy, Target and Walmart — should fare well.

However, there are still 23 days left until Christmas and anything can happen, and over the weekend, some urgency crept in. Retailers and brands unleashed ads notifying consumers that time was running out on extended Black Friday deals, then shifted the narrative to promoting early Cyber Monday discounts. That happened just as a big storm pushed east, bringing snow, sleet, winds and rain to metro areas. Precipitation was notable in the Southwest with Los Angeles, San Diego, Las Vegas and Phoenix recording their most Black Friday weekend rainfall in more than 20 years, according to Planalytics, a firm forecasting the weather and helping retailers to plan accordingly.

The weather did suppress some brick-and-mortar traffic, though snowfall was heaviest in higher elevations and smaller markets throughout the Rockies and Plains. Out west, colder weather lifted demand for jackets, gloves, hats and hot drinks as well as need-based categories such as snow shovels, boots, and wiper blades, Planalytics said.

Though disrupting shopping as well as traveling, the timing of the storm was in one respect fortunate, hitting the Northeast on Sunday, which is when many consumers break from visiting malls to instead eat turkey leftovers, watch football and mine early Cyber Monday deals online.

However, generally, the promotional activity seems controlled and not way off last year.

Despite these and other concerns about what’s ahead, optimism generally prevailed.

“There’s more buzz and more traffic,” said Craig Johnson, president of Customer Growth Consumers, who is among the most optimistic of retail experts. “This augurs to be at least a good if not great holiday,” possibly exceeding 5 percent, he said. “Big box discounters Walmart, Target and Costco are rocking along.”

Johnson cited a “sea change” in how women are shopping during holiday. At Apple and Best Buy, 50 percent of the customers are women, whereas five years ago, 35 percent were women. That has taken a toll on apparel, which is getting less of a share of wallet, though it’s not all bad, Johnson said. He cited distressed denim, sneakers, ath-leisure, puffer jackets, animal prints, sequined tops, tops with dramatic shoulder treatments, onesies for adults, thigh-high boots, sherpa jackets, shorter-cut jackets and retro Seventies-and-Eighties-style graphic Ts for kids as selling well. Others also indicated that fine jewelry, diamonds, fragrance and cashmere sweaters, Apple AirPod Pro, Apple Watch Series 5, Samsung Galaxy Note 10 cell phones, as well as large-screen TVs across several brands, are moving as well.

Shoppers at many Target locations lined up outside before the 5 p.m Thanksgiving openings and the big chain was ready with associates at the front to guide shoppers to the items they wanted and through checkouts. “This has been the smoothest Black Friday yet,” said Target’s Los Angeles store director Brian Higgins.

At Ulta Beauty, discounts of around 40 percent off were fairly consistent with those offered in 2018, according to investment research firm Jane Hali & Associates, but sales started earlier this season with more doorbusters.

“There will be margin pressures due to the competitive environment,” said A.T. Kearney’s Sansone. “There is certainly more aggressive and assertive discounting. People don’t want to lose to the behemoth of Amazon.”

ICSC, surveying more than 1,000 U.S. adults in conjunction with Engine Insights, reported Sunday that consumers spent an estimated $504 on average for Thanksgiving and Black Friday combined, with 50 percent spending more than last year, setting the stage for a strong season.

Discount department stores were the most popular destinations for shoppers, and consumers visited an average of 12 stores over the weekend, ICSC said.

“The excitement around shopping during the Thanksgiving weekend remains strong,” said Tom McGee, president and ceo of ICSC.

Looking ahead, ICSC reports that 77 percent of all consumers and 86 percent of Millennials plan to shop Cyber Monday.

“The holiday season is officially under way and top-performing retailers will be those connecting with consumers through both physical and digital channels,” said McGee.

Stephen Lebovitz, ceo of CBL Properties, one of the largest REITs in the U.S., said consumers on Black Friday were “getting out of their houses and going to malls. We got good reports yesterday. It definitely helps to have a strong economy.…Cosmetics stores like Sephora and Bath & Body Works did really well, but they were offering promotions and good sales. Victoria’s Secret, Pink, Aéropostale and American Eagle Outfitters also had strong traffic and were doing strong sales. The department stores were steady.”

While CBL malls were closed Thanksgiving Day, most department stores at those malls did open except for Dillard’s and Nordstrom.

The full holiday season is tracking at 14.9 percent year-over-year online growth, with $68.2 billion spent online from Nov. 1 to 30, a comparable increase of 16.5 percent for that period. As forecasted, all 30 days in November have surpassed $1 billion in online sales, with 11 days surpassing $2 billion, Adobe reported.

Later this week, the usual lull in shopping will set in and last until around Dec. 17, when consumers get a second wind and are eager to find remaining items on their gift lists.

At Rothmans, a three-unit men’s specialty chain in the New York City area, the cold, sunny weather until Sunday strengthened business. “We think it will be a good Christmas,” said Ken Giddon, president. “Granted, we’re in fairly affluent areas, but the mood of the consumer is pretty good.”

At Fanatics, which sells licensed sports merchandise, e-commerce sales on Thanksgiving and Black Friday were up over 25 percent from the prior year, according to Jack Boyle, global copresident of direct-to-consumer retail. Friday was the largest day in the history of the company, surpassing last year’s Cyber Monday numbers, he said. Almost 70 percent of all sales were made on mobile devices, up from 64 percent last year.

Amazon, which launched holiday discounts on Nov. 1, highlighted fashion, home, toys, electronics and beauty as being among the most popular sellers over Black Friday.

Sasha Skoda, a director of The RealReal, said markdowns are across all product categories, but the company is “seeing customers shopping handbags, outerwear, sneakers and fine jewelry” in particular. Its sale started a week before Black Friday, giving shoppers plenty of time to browse before buying.

Skoda said the company’s “most successful promotion” is its “buy more earn more” program. From Black Friday through Cyber Monday, The RealReal offered $500 back on purchases of $2,000 or more. “Customers love being rewarded for larger investment purchases, in addition to scoring on deeper discounts,” Skoda said.

Nordstrom for the first time offered a preview beginning Nov. 8 on the items it would later discount at 20 percent and 50 percent off starting the Wednesday before Thanksgiving. A spokeswoman said the preview was an effort to help customers “plan their shopping in advance.”

Rod Sides, vice chairman at Deloitte LLP, told WWD that so far “consumers are behaving as predicted.” including noticeable Gen Z and Millennials shopping in-store. “There was a very young crowd [Black Friday morning],” said Sides. In and around stores, Sides said there was a “strong demand and traffic for many of the stores,” saying that the drive “seems to be a direct response to specific offers.” Sides also noted that “retailers came out of the gate with aggressive pricing being 40 to 50 percent off.”

Matching predictions by Deloitte, apparel was a popular category for shoppers, with what Sides said was “a lot of traffic in both footwear and accessories.” The biggest change, Sides said, “is the increased reliance on e-commerce on both Thanksgiving and Black Friday. Respondents told us they would spend almost as much online today as in the stores.” Further, Sides said Deloitte hopes these signs will point to a strong season overall.

BounceX expects to see the total number of mobile conversions to outpace desktop conversions on Black Friday for the first time ever this year.

• Rothmans: Save the Duck, Nobis and Gimos outerwear; Paige and Sweat Tailor jeans; gifts from Beltology.

Price promotions controlled, mostly on par with a year ago, but many started earlier and get prolonged.