By Rosemary Feitelberg and Sharon Edelson on January 18, 2007
View Slideshow 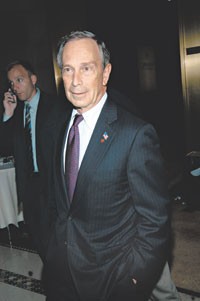 The mayor put forward a total of $1 billion in tax cuts during his sixth annual State of the City address, delivered at the New York City College of Technology in Brooklyn. That figure includes $750 million of property tax cuts. Early in his speech, Bloomberg said that, last year, the city’s unemployment was at an all-time low and its bond rating was at an all-time high.

While the plan to do away with the apparel tax was met with general support from retail executives, it will require approval from the state Legislature and Gov. Eliot Spitzer. However, purchased items would still be subject to the state and MTA tax, totaling 4.375 percent. Even so, retailers said that would be an improvement compared with the current 8.375 percent city, state and MTA tax.

If the 4 percent tax cut is approved, it would save taxpayers an estimated $110 million annually. The mayor said, “To make sure that shoppers and visitors continue to flock to great stores in all five boroughs, we will totally eliminate the city sales tax for all clothing and footwear.”

The only states that have no sales tax at all are Alaska, Delaware, Ore­gon, New Hampshire and Mon­tana, although in Whitefish, Mont., there is a city sales tax. However, neighboring New Jersey exempts clothing from sales tax, a move made years ago to boost the state’s retail sector. The clothing sales tax in other big cities varies, from 9 percent in Chicago, 8.5 percent in San Francisco and 8.25 percent in Los Angeles to 5.75 percent in Washington, D.C.

Michael Celestino, executive vice president of stores for Barneys New York, said of Bloomberg’s plan, “In the long term, it will be beneficial, but it’s still not a situation where there’s no tax like New Jersey. There’s still that 4 percent tax. There’s no ceiling, which could clearly benefit us because in the past when they’ve done tax-free weeks on apparel and footwear under $110, it’s had little effect on us because of our price points. It will be an advantage, but it’s not going to be sweeping like gangbusters.”

This story first appeared in the January 18, 2007 issue of WWD. Subscribe Today.

Michael Gould, chairman and chief executive officer of Bloomingdale’s, said it remains to be seen whether permanently eliminating the city sales tax will have a profound effect on consumer spending. He noted that the occasional no-tax week for merchandise priced for as much as $500 results in “an appreciable difference and an increase in the business.”

Gould said when tax is waived on clothes and shoes costing less than $110, which is currently the case, there’s no appreciable difference. “Will people spend more because they don’t have a tax?” Gould said. “I don’t know. I can’t quantify it.”

Should the tax cut come to fruition, that could be an added incentive for visitors to shop in the city, especially Europeans who have been making the most of the weak dollar by shopping here. Last year, a record 44 million people visited the city, the mayor said. He also announced the launch of NYC Clean Streets, a $1.6 billion initiative geared toward cleaning up the commercial corridors in all five boroughs.

Another retailer, Jeffrey Kalinsky, founder of Jeffrey New York, said of the sales tax-cut plan, “That would be a tremendous deal. That would give the person who lives in New York State an added incentive. The more expensive the item that’s not being taxed, the more significant the savings and the more meaningful it is to the customer. It will benefit everybody at all price points, but I actually think it will be really good for the luxury market. Everyone loves a savings. If it’s going to bring more people and commerce and revenue, it sounds like a win-win situation.”

Retailers at the high end of the spectrum were not the only ones who were enthusiastic about the prospect. Marsha Wilson, ceo of Daffy’s, said, “We think it would be good for the consumer, good for the economy and good for New York. It will make a measurable difference in our business. It will make New York more competitive.”

Robert Chavez, president and ceo of Hermès USA, said, “Any time you eliminate an additional tax on retail sales, it’s going to help. Between state and local taxes, New York has one of the highest sales taxes in the country.”

Elimination of the city tax would be a step forward. “I was pretty excited to hear about it. It [would] no longer apply just to items priced at $110 and below. It can be significant, even at the luxury level. If you’re talking about a $10,000 handbag and eliminate 3 percent, it’s still a nice amount of money,” Chavez said.

The sales tax break would be meaningful to Hermès customers who shop for gifts once or twice a year, he said. “It will help make New York more competitive. Right now, it’s a no-brainer to go to New Jersey. This may make people think twice. It may be the first step toward eliminating the state tax.”