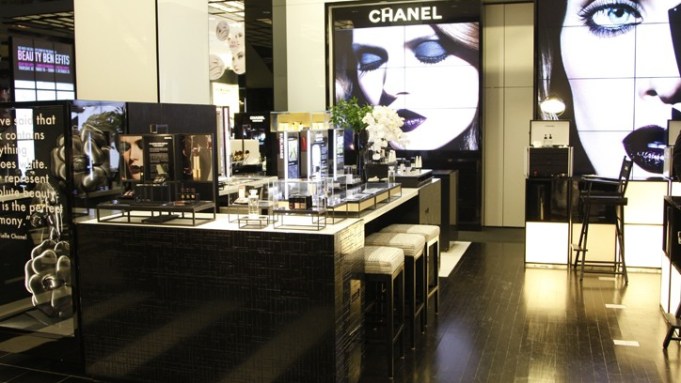 He was speaking to a crowd of hundreds of cosmetics executives, including a number of industry leaders, such as Leonard Lauder, chairman emeritus of the Estée Lauder Cos. Inc., and Jean-Paul Agon, ceo of L’Oréal.

“From now on, this sets the standard for department stores,” Lauder noted. Agon agreed, “It is the boost that the U.S. market needed. A store like this, it’s a great example for all stores. It’s very modern with all its visuals and very active.”

Gould called the event a “seminal moment” in the development of Bloomingdale’s business, adding that what’s happened on the main floor “transforms” the store.

With video screens flashing messages from every angle of the department, the high-tech, innovative nature of counter design is palpable. Clarins USA president and chief executive officer Jonathan Zrihen pointed to the two treatment cabines within his 230-square-foot space, which feature sliding partitions and a central rotating divider for privacy. “It’s an open counter to create circulation,” he added.

Heidi Manheimer, chief executive officer of Shiseido Cosmetics America, discussed the technological advances of the Shiseido counter, particularly the small in-counter monitors connected to stands that hold individual products. When a customer removes a product from its pedestal, adjacent monitors are activated and flash information about the particular product.

Christine Dagousset, executive vice president of Chanel Fragrance and Beauté, described the Makeup Studio concept in the brand’s 878-square-foot counter, built around a flexible interior space that can adapted for different activities. The first of its kind for Chanel, the counter is staffed with a squad of makeup artists. “It is a new concept for us,” Dagousset said, “and well-suited to the spirit of Bloomingdale’s, which is a spirit of fun and high energy.”

Over at the Bobbi Brown counter, where business has jumped by 38 percent in two weeks, according to industry sources, the brand’s founder was singing Gould’s praises as “the Barack Obama of beauty.” Her 548-square-foot space was designed to be so inviting and relaxed that Brown plans to serve espresso and cappuccino. “We’re redefining gift-with-purchase with service-with-purchase,” quipped Maureen Case, president of specialty brands at Lauder, which owns Brown’s brand.