By David Moin and Rachel Brown on August 6, 2010
View Slideshow 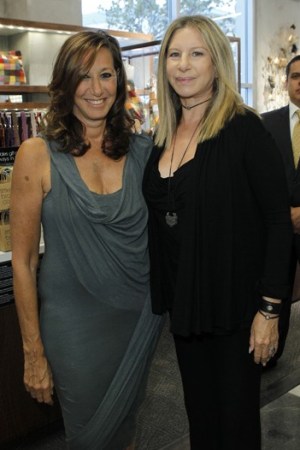 SANTA MONICA, Calif. — “I promised I would take her shopping,” Donna Karan said, as she stood beside her good friend Barbra Streisand at the opening of Bloomingdale’s Santa Monica on Wednesday night.

For a department store opening, the evening drew quite a celebrity crowd, including Diane Keaton and James Brolin and, from the industry, Nicky Kinnaird, Michael Ball, Arthur Coppola and Sidney Kimmel. The evening raised more than $125,000 for the Cedars-Sinai Heart Institute’s Women’s Heart Center and clearly impressed Streisand, a solid supporter of the institute, with the cuisine.

“They are going to have coffee yogurt here, coffee frozen yogurt — my fave,” she exclaimed. Turning to the serious matter of heart disease, Streisand informed the crowd of 200, “It’s not just a man’s disease anymore. This is now a women’s epidemic.”

The guests first sipped cocktails between handbag displays, then headed to the contemporary and surf apparel areas for a dinner masterminded by chef Lulu Powers and a rollicking, physical performance by pianist Elew, interpreting songs by The Rolling Stones, Michael Jackson and Nirvana.

On their way to the dinner, the guests got a preview of a store that is compact and has few precious designers yet shows off Bloomingdale’s at its most expressive and playful.

“Whimsy, fun and the unexpected — those were the key elements we went after,” said Michael Gould, Bloomingdale’s chairman and chief executive officer, on Wednesday during a tour of the store. Opening today in the rebuilt and remerchandised Santa Monica Place, it is considered a prototype and a test of how well the retailer can adapt its scaled-down SoHo concept to locations outside New York.

“You can’t say this is a store you’ve seen somewhere else before,” Gould said. “It just has a different feel.”

Although there is only 76,000 square feet of selling space over two levels — or about a third the square footage of typical Bloomingdale’s units — the store, with high, 17 foot, 8 inch ceilings, feels spacious. Yet there’s an intimacy, in the sense that shops are intentionally shallow so it’s easy to get close to the merchandise without digging too much, furthering the specialty store feel. In addition, there’s a noticeable absence of hard shops, except for David Yurman, Kiehl’s and Jo Malone, and the vendor logos are generally restrained, aside from a handful such as those of Marc by Marc Jacobs, Theory and Burberry. The result: Bloomingdale’s upscale, contemporary vibe casts the main impression, unlike a traditional department store, where brands can run roughshod.

To integrate into the laid-back seaside California community, Bloomingdale’s Santa Monica exhibits a lighter touch, with fitting rooms constructed from corrugated plastic walls and wood frames reminiscent of beach cabanas, and signs over exits that say, “Leaving so soon?” In the “style bar,” stylists park the shopping carts they wheel around the store to gather outfits for clients, and there are four fitting room “pods” that can ascend into the ceiling to open up space on the selling floor for special events. Adding to the theatrics is a conveyor system that pulls mannequins suspended above ground for a movable fashion show circling a 2,000-square-foot area.

The center court, which includes sunglasses, handbags, jewelry and shoes, is relatively oversize, occupying a third of the first floor and reflecting businesses growing at a healthier clip. Throughout, the merchandise is tightly edited via vignettes clustering different labels together, such as a shop for women’s casual shirtings with Three Dots, Majestic, Zoa and T Los Angeles. It creates what Bloomingdale’s president Tony Spring described as a “sense of experimentation and uniqueness….We’re highlighting trends with smaller brands, but bigger brands also have an importance presence.”

Bloomingdale’s way of mixing it up extends to other departments, such as shoes, where there is a range of prices, from the more accessible Miss Trish embellished flip-flops for $65 and Cole Haan shoes for $178 to Giuseppe Zanotti’s $795 zip booties. And in men’s wear, customers can find Armor Lux $50 “Breton” striped shirts from Paris displayed next to Michael Bastian’s $500 plaid work shirts.

Retail analyst Dana Telsey compared Bloomingdale’s Santa Monica with the old Henri Bendel on 57th Street in New York and its “Street of Shops,” while Michael Ball invoked Selfridges as he got busy shopping, splurging on $225 Prada sunglasses he discovered, amid the vast array of styles, that he felt had the perfect night lens.

“You can do the [Jack] Nicholson thing, but actually see,” Ball said.