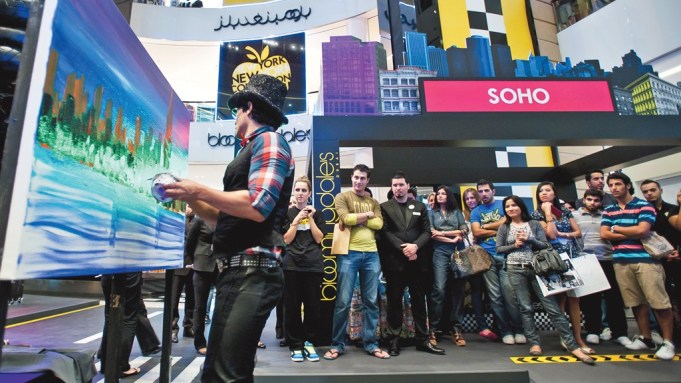 Is Bloomingdale’s back in the business of import promotions?

Not exactly, though the department store is staging a “New York, New York” campaign at its fashion and home stores in the Dubai Mall, the retailer’s only international location.

The event harkens back to the Seventies and Eighties, when staging promotions revolving around products from different countries, such as China, France and Italy, was standard procedure for Bloomingdale’s 59th Street. But the format became played out by the Nineties, and remains dormant, at least locally. “I don’t think so for New York,” said Michael Gould, Bloomingdale’s chairman and chief executive officer, when asked about the possibility of a themed promotion. However, he said it’s a “very appropriate” strategy for Dubai, where the format would seem fresh.

The Dubai stores are filled with New York City trappings, from a yellow cab parked outside the mall, to a King Kong installation, and Diane von Furstenberg has created a commemorative shopping bag for the occasion. The world tour of DKNY’s Golden Delicious Million Dollar Fragrance Bottle makes its first stop at Bloomingdale’s Dubai. And Miller Harris and Guerlain have fashioned special fragrance bottles, while Carolina Herrera will make a splash with 212 POP, a limited edition fragrance bottle designed by visual and performing artist Ben Frost.

“We want our customers to step into the store and feel like they could easily be shopping on 59th Street or in SoHo,” said Matthew Mackenzie, general manager of Bloomingdale’s Dubai.