With a Sweeping Renovation, Bloomingdale’s 59th Street Looks to Sharpen Its Edge

The near-total renovation of the 815,000-square-foot flagship progresses to the women's floors next year. 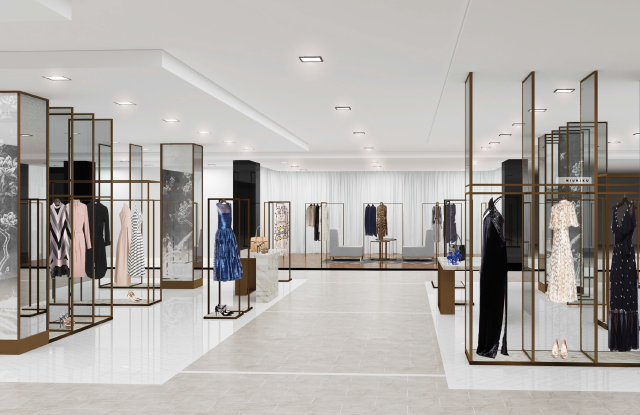 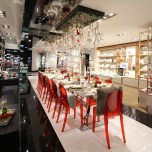 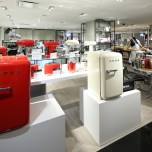 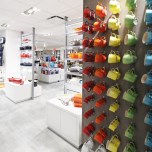 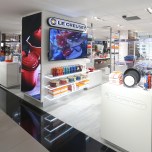 NEW YORK — Saturday’s Generation is gone, but Bloomingdale’s Tony Spring says, “The energy is coming back.”

He’s referring to Bloomingdale’s 59th Street flagship here, which next year begins to recast three fashion floors and main floor cosmetics and develop a “shoe complex.” And this month marks the completion of a two-year overhaul of the home store on levels six, seven and eight.

“This is the transformation of a world-renowned flagship,” said Spring, Bloomingdale’s chairman and chief executive officer, during an interview where he was accompanied by Jack Hruska, executive vice president of creative services.

The intent is to make the shopping more experiential, comfortable, easier and fun, and bring back some of the spirit of Saturday’s Generation, that young crowd in the Seventies that flocked to the Bloomingdale’s 59th Street on weekends as much to shop as to socialize.

“We began in 2016 with a plan to renovate almost the entire store including the exterior,” Spring said. “Look for areas of personalization, customization, repair, comfort, better fitting rooms, enhancements to improve the customer experience as well as to showcase new ideas, different services, selling experiences, demonstrations and a different visual approach.”

The flagship, with 815,000 square feet including 555,000 square feet of selling space over 10 levels, accounts for between 18 and 20 percent of Bloomingdale’s total annual volume of $2.9 billion, or at least $520 million in sales, according to sources.

Fashion at the flagship — which includes contemporary sportswear, designer sportswear, designer collections, denim and outerwear, as well as lingerie and swim — will be confined to levels two, three and four, and no longer carried on five, which is being converted to a shoe complex of more than 40,000 square feet. Aside from having a footwear presentation with impact and depth, there will be faster service since the stockrooms will be close to the selling floor. Bloomingdale’s has been operating with two separate areas for women’s shoes, on two and four, totaling 27,000 square feet, which created a sense of underplaying one of retailing’s top-selling categories.

Spring and Hruska said it was premature to discuss specifics of designer and brand presentations on floors two to four, citing competitive concerns, though they acknowledged that contemporary, an area where Bloomingdale’s has been at the forefront, must be “modernized.” Aqua, which is the retailer’s longstanding, trendy private fashion brand, will become a more integral component in targeting Millennials, a demographic that many retailers have struggled to figure out.

Leased shops have been springing up at the flagship in recent years and have been particularly noticeable in luxury leather and ready-to-wear. Asked if the renovations mean more leased shops are on their way, Spring replied: “We remain flexible about this, whether leasing space to brands or buying the merchandise. It’s not about a financial equation. It’s about providing the best assortment for the customer.”

Creating a food hall is on the table, but negotiations with an operator have been difficult. Spring declined to comment on the food hall possibility. Men’s, which was overhauled in 2008, is being left alone, at least for now.

Rendering of a renovated fashion floor at the Bloomingdale’s flagship.

The renovation has many objectives, including staying competitive to two newcomers to New York: Nordstrom opening on West 57th Street first with a men’s store next spring and the much larger women’s store in 2019, and Neiman Marcus, opening in Hudson Yards in 2019. There’s also Saks Fifth Avenue, which has a comprehensive flagship renovation of its own under way.

For Bloomingdale’s, a big part of its strategy revolves around tapping a broader base of consumers and elevating that distinctive “energy” and edgier tone — compared to Saks, Neiman’s or Nordstrom — that makes Bloomingdale’s, Bloomingdale’s.

“Over its successful history, Bloomingdale’s has always catered effectively to the next generation of customers, way back when, to Saturday’s Generation,” Spring said. “Our focus has always been to be the store of the moment. We are constantly looking to incorporate newness and freshness, without type-casting to a generation. We appeal to a lot of generations. But to be modern and fresh clearly we have to appeal to the next generation of consumers as well. Home represents an opportunity for us to capture that customer, and extend the [shopping] life cycle of that customer,” as they get married, create homes, travel, have kids and grandchildren. The home business has been undergoing “a healthy time period,” with cocooning and Millennials establishing homes, Spring said.

While touring the renovated home floors, Spring and Hruska cited the store’s greater emphasis on comfort and conveniences to encourage socializing and sticking around; product education through demos; new visual displays often laced with whimsy, and merchandising changes that simplify the shopping and reduce its hassles. “The departments are shallower so from the aisle you can easily browse and touch almost everything,” Hruska said.”Housewares is extremely easy to shop. It was cluttered before.”

Spring said Bloomingdale’s now has one of the biggest bed displays in the country — 72 beds — and such brands as Frette, Matouk, Pratesi and Donna Karan. There’s customization of swatches for sheets, monogramming, and no longer the sense of walking through a bed department that’s all white or ivory. “Now there’s fashion,” Spring said. There’s a broader price range, too, from $100 to $1,500 for bedding. “It’s upscale, yet accessible and aspirational,” Spring said. “Young customers don’t just want to buy opening prices or luxury. Most people are mixing it up.”

On the eighth floor for housewares, cookware and gadgets, Spring observed, “You can buy a knife that cuts everything, but if you come here, we sell about 50 different kinds of knives. We have bread knives, tomato knives, carving knives. It’s about teaching you about the different knives. You see a lot of product. It’s an education process. All-Clad explains how their products are manufactured domestically. Home used to be an area that was too focused on price. Now it’s about the product, the idea — why do I need this or that.”

Bloomingdale’s reduced the space for tabletop and housewares, though Hruska said, “The perception is that it’s a bigger area with easier access to product within arm’s reach from the aisle, greater visibility and brighter lighting.”

There’s a fully operating kitchen for demos with celebrity chefs and the seventh floor contains luxury offerings for the home in china, crystal and silver highlighted by Lalique, Baccarat and Michael Aram among others; a comprehensive wine presentation with decanters, glasses, openers and Corivan devices to pour the wine without popping the cork off and reseal the bottle to preserve the wine; a new gift wrap that’s faster and no longer buried in the back of the store; touchscreen directories in different languages, and Forty Carrots, the popular restaurant, was expanded.

Also, the Lexington and Third Avenue facades have new window lighting and planters, and the 60th Street facade will feature two new store fronts that have been closed for decades, creating two entrances.

On seven, along with the china, crystal, flatwear and silverware, there’s a larger registry that’s grown to 2,500-square-feet from 1,400 square feet and has restaurant-style banquettes, a bar setting and glass-enclosed meeting rooms for an intimate aura. The bridal registry has been renamed “The Registry,” recognizing the advent of same-sex marriage. “It used to be very confined,” Spring said. “Now it’s set up to be a social experience. Grooms and brides will spend more time here. With the growth of same-sex marriage, the business is meant to be inclusive.”

Bloomingdale’s, unlike Nordstrom, Saks, Neiman’s and Barneys New York, has a comprehensive home business, setting it apart from upscale competitors. Market sources estimate that home accounts for just under 15 percent of Bloomingdale’s total annual, or roughly $420 million in sales. Years ago, it accounted for a greater percentage.

“Home furnishings has always been a competitive distinction,” Spring said. “This is our first complete renovation of the home store in 35 years. We wanted to modernize for a competitive advantage.”