The 115,000-square-foot unit in the Glendale Galleria in Los Angeles is the retailer's first department store opening in three years. 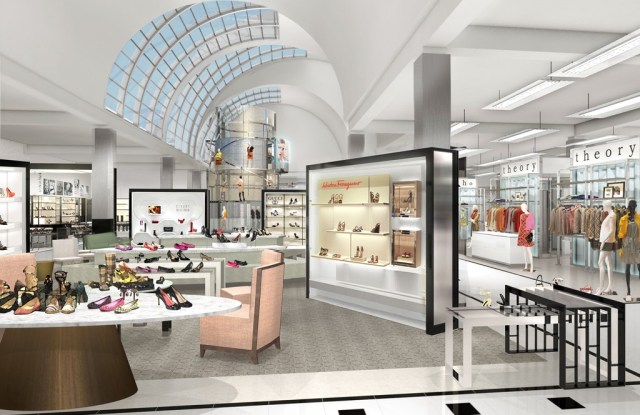 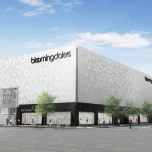 Bloomingdale’s is back on the expansion path, with a 115,000-square-foot unit in the Glendale Galleria in Los Angeles set to open Friday.

With 86,500 square feet of selling space and two levels, Glendale is expected to generate about $40 million in annual volume. The store is comparable in size to Bloomingdale’s units in Santa Monica, Calif., and New York’s SoHo neighborhood. Aside from that, the approach is different: There is greater glamour inherent in the store design and in the assortment at Glendale. The tone is set right at the outset with Louis Vuitton and Gucci boutiques, flanking the entrance from inside the mall, where the highest traffic is anticipated.

“Those are two big statements,” said Michael Gould, Bloomingdale’s chairman and chief executive officer, who is stepping down on Feb. 1. “From an assortment point of view, the store is dramatically more upscale than Santa Monica. The quality of the lines parallels our San Francisco flagship,” where the appeal is also decidedly elevated. “Glendale shows very clearly how the luxury market views the evolution of Bloomingdale’s, how we continue to trade up in value and service, and how we continue to evolve as an upscale, accessible luxury brand,”

Beyond Gucci and Vuitton, brand boutiques continue to reign. The store is filled with them, 48 to be precise, primarily situated around the store’s perimeters. Key designer accessories boutiques include Chloé, Burberry, Tory Burch and Ferragamo. In cosmetics, there are boutiques for Chanel, Illamasqua, La Mer, La Prairie, MAC, Sisley and Jo Malone.

By comparison, the Santa Monica store has three vendor shops. The concentration in Glendale, explained Jack Hruska, executive vice president of creative services, elevates the appeal to shoppers in the area, particularly all the film and television studio workers at Disney, DreamWorks, Pixar and Universal Studios. “Customers in this market are very brand-conscious,” Hruska said. “This is more of a flagship presentation. Usually in our smaller locations we don’t have this degree of brand penetration.”

“The challenge is always how do you bring the excitement of our 59th Street store [in Manhattan] to a building that is 15 percent of the size,” Gould added. “It’s not simple. You have to be sensitive to the local tastes and the customer.”

Still, executives say the new Bloomingdale’s sustains its own brand DNA and energy, and isn’t getting overrun by brand boutiques. “We still have strong classification presentations in denim, T-shirts, shoes and jewelry,” observed Tony Spring, president and chief operating officer, who will succeed Gould as ceo.

They also cited the familiar checkerboard tiling running through the B’way beauty area with the skylight above, gold-trimmed fixtures, and 30- to 40-foot-high ceilings above women’s footwear on the second level. At 4,000 square feet, the jewelry department is proportionally larger than those in other Bloomingdale’s locations. There are generously spaced classification areas for shoes, with 8,500 square feet, as well as for denim and T-shirts.

Boutiques occupy about 40 percent of the center core space (cosmetics, footwear, jewelry and accessories) while 80 percent of the ready-to-wear floor is occupied by boutiques, and the remainder is for men’s and kids. The store will be manned with personal shoppers called style advisers, in addition to the sales associates, as well as a Studio Services department to help movie studios outfit their actors and actresses.

Bloomingdale’s in Glendale took over a former Mervyn’s store, gutted the box and expanded the footprint deeper into the mall, giving it greater space and taking over an existing skylight. At night, the store will be visible from afar, with a combination of LED illuminated squares and pale gray, silver, green and black tiles. Inside, associates will be equipped with mobile checkout devices and digital look books, and a “denim seeker” to help find the best jean fit. A by-invitation private preview day will donate a portion of the proceeds to 10 local charities.

Bloomingdale’s executives said they’ve eyed the Glendale Galleria for years. The turning point came when the mall began a major redevelopment and upgrading. The 1.5-million-square-foot mall, owned by General Growth Properties Inc., created an outdoor public plaza, new entrances, new restaurants and signs, and modernized the food court, the floors, lighting, elevators, escalators and added chandeliers and water features. The mall was built in 1976, and is known for housing the first Apple Store and the first Disney Store.

The last department store opened by Bloomingdale’s, which generated north of $3 billion in revenues last year in 36 locations, was in Santa Monica in August 2010. That same month, Bloomingdale’s began opening outlets and currently has 13. Earlier in 2010, Bloomingdale’s opened its first and only international store, in Dubai.

Glendale is Bloomingdale’s eighth unit in Southern California, 10th in the state, and 37th in the entire chain. After Glendale, the next Bloomingdale’s opening will be in Stanford, Calif., in fall 2014, replacing an existing unit. In fall 2015, a store will open in the Ala Moana mall in Hawaii.

“People are talking to Bloomingdale’s about locations in lots of places. We’ve had good growth over the last number of years, so why not? We have fewer stores than either Nordstrom or Neiman’s,” Gould said. The Neiman Marcus Group operates 41 Neiman Marcus stores, two Bergdorf Goodman stores and 36 Last Call clearance centers. Nordstrom has 117 full-line stores and 131 Nordstrom Rack outlets. “We have opportunities.”

Among the most likely targets are the Pacific Northwest, Arizona and Texas, where Bloomingdale’s has no department stores.

The retailer could also open additional freestanding home stores, like the Medinah unit in Chicago, Gould suggested. “We don’t have a separate home-store strategy but that doesn’t mean there isn’t an opportunity.”